Rollups are regular smart contracts on the Ethereum mainnet that serve as the relay between the mainchain and layer 2, where computations occur.

On-chain scaling solutions, as their name suggests, require changes to the Ethereum protocol, and the main focus of on-chain scaling tends to be sharding, which splits a database horizontally to spread the load. In the context of Ethereum, sharding reduces network congestion and increases transactions per second by creating new chains, or shards. This can also reduce the load for validators on their nodes.

Also known as layer 2 solutions, off-chain scaling solutions are implemented using a protocol or network separate from the layer 1 network and, therefore, make no changes, in the case of Ethereum, to the mainnet protocol. Some of these solutions derive their security from the Ethereum consensus mechanism, including rollups or state channels, while other solutions involve the creation of new chains that derive their security separately. The latter group tends to include sidechains, validiums, or plasma chains.

Layer 2 or off-chain solutions tend to be sought because they can increase the transactions per second, which improves network congestion and improves user experience. The transactions can reduce gas fees for users and, therefore, make the Ethereum mainnet more inclusive and accessible, updates to scalability are not at the expense of decentralization or security, and the applications at layer 2 networks bring their own efficiencies when working with assets at scale. These solutions include the following: 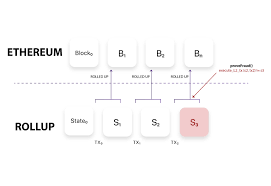 Example of where Rollups exist in reference to the Ethereum mainnet.

The idea of rollups dates back to 2014, when Vitalik Buterin described them as shadow chains, which, unlike other scaling solutions, are compatible with the smart contracts powering many DeFi applications. Since then, these shadow chains have been renamed rollups, and these allow the off-chain aggregation of transactions inside an Ethereum smart contract to reduce fees and congestion, increasing Ethereum's transactions per second from 15 to more than 1,000. The general process of rollups is similar to using a debit or credit card, such that a series of transactions occurs in the background, being processed through several applications. But in rollups, the transactions are taken off of the Ethereum blockchain, occur on a sidechain or the rollup, and are returned as a bundle of transactions to scale Ethereum to handle increased transaction traffic.

Despite their inherent complexity, using rollups tends to be a simple experience for the user. Rollups work similarly, with the idea that a user's funds are bridged to the layer 2 network, or the rollup, where the transaction can be completed. These transactions can include buying or selling cryptocurrencies or NFTs, moving funds between wallets, or interacting with DeFi protocols. Once these transactions are complete, the user can return their funds back to the layer 1 blockchain.

More practically, this looks like a user, taking a wallet such as MetaMask, with ETH or another ERC-20 token (or other Ethereum-compliant token). The wallet is then switched to the layer 2 network, which is a similar process to any DeFi protocol in which a wallet can be connected. Once the wallet is connected to the layer 2 network, the user's tokens are "bridged," or moved from one network to another. This movement incurs a transaction fee to bridge funds from Ethereum to a rollup. But once the funds are in the rollup, the user can trade funds as usual.

Some networks charge ETH for transaction fees, requiring the user to have ETH to pay those fees, but the fees on rollups are cheaper than on the Ethereum blockchain itself. And some rollups charge almost no fee at all. Once transactions are complete, the funds can be bridged back to the Ethereum blockchain, which can entail converting funds from a rollup back into ERC-20 tokens or ETH in a process similar to the initial movement of funds.

There are two main types of rollups: Optimistic and Zero-Knowledge (ZK). Both are developed to further reduce transaction costs, with both working to reduce wait times and payments for transactions while ensuring the transactions are not fraudulent.

While the disadvantages of optimistic rollups can include those below:

Zero-knowledge rollups, also known as ZK-rollups, bundle thousands of transactions off the main Ethereum chain and create a cryptographic proof known as a validity proof, or a SNARK (succinct non-interactive argument of knowledge), which is posted to the mainnet. This means a ZK rollup needs a validity proof, rather than all of the transaction data, which decreases the cost to transact because less data is being included. When using a ZK rollup, there is less hesitation to move assets from layer 2 to layer 1, as the validity proof has already been approved by the ZK rollup and has authorized the transaction. The advantages of ZK rollups tend to include the following:

There are also some disadvantages of ZK rollups:

Optimistic rollups have to provide time for the network participants to submit fraud proofs in the case there is one, before a transaction can be finalized on the layer 1 blockchain, or mainnet. This can take a long time to ensure all fraudulent transactions can be disputed, with wait times taking as many as a few weeks before funds can be withdrawn from the Optimistic rollups. Some projects tackle this problem through liquidity pools, reducing wait times through almost instant withdrawals and a small convenience fee. For some, this fee is acceptable, especially for transacting smaller funds, but for professional traders, this fee for liquidity would be reflected in their profit margins.

This makes ZK rollups look better than Optimistic rollups, but ZK rollups depend on Ethereum Virtual Machine (EVM)-compatibility. Due to the complexity behind the ZK rollups, it is harder to create an EVM-compatible ZK rollup, and therefore it is difficult to scale general purpose applications without having to rewrite the application logic. Various projects have worked to address this problem, often using virtual machines capable of executing the smart contracts with zero-knowledge proof computation. Optimistic rollups do not have as many problems as ZK rollups in dealing with EVM compatibility. They have to introduce a few modifications to run their own version of the EVM, but most contracts can be ported without making changes.

ZK rollups have higher computation requirements than Optimistic rollups, with nodes computing zero-knowledge proof to be high-specification machines, which can make it harder for average users to be able to run them.

Challenges and risks in rollups

While rollups borrow Ethereum's core security guarantees, there remains some risk. For one, rollups' smart contracts can contain bugs, as with any program, and while fail-safes and audits can help prevent exploits, relying on external programs to handle transactions always carries additional risk. Both types of rollups are still in their infancy, and due to this, they remain somewhat centralized and include many of the incumbent risks of centralization, such as a development team maintaining partial control over a network, and, theoretically, allowing a development team to maintain partial control over the network and related contracts. Some rollups also rely on centralized sequencers to coordinate transactions on the layer 2 chain. A sequencer is not capable of spoofing or altering transactions, but there are theoretical concerns it could censor or re-order them to extract some benefit. Most projects around rollups promise to, or have begun, to decentralize. Other challenges facing rollups and related projects include the following:

An Incomplete Guide to Rollups