Quantum sensors and quantum sensing describes the use of a quantum system, quantum properties, or quantum phenomena to perform a measurement of a physical quality.

Quantum sensors are measuring devices. Historical examples of quantum sensors include magnetometers based on superconducting quantum interference devices and atomic vapors, or atomic clocks. More recently, quantum sensing has become a distinct and growing branch of research in quantum science. The sensors work to use the sensitivity of quantum states, and are capable of detecting a wide range of small signals in the environment. Essentially, the sensors take advantage of the characteristic that makes building a quantum computer difficult.

Used for power transmission condition monitoring in the industrial and agriculture sectors, RF detection in the defense and security sector, and remote sensing in robotics.

Used for prospecting and wellbore conditioning in the oil and gas sector; surveying and detection of buried assets for the utilities and construction sector; and navigation for the defense and security sector.

Used for downhole survey in the oil and gas sector, and navigation systems in robotics and the defense and security sectors.

Due to the size and complexity of quantum sensors compared to classical sensor counterparts, there are questions around how competitive quantum sensors can be. Quantum sensors are difficult to manufacture. Many of the required subsystems, such as lasers and vacuum chambers, are not items which have had costs driven down by mass markets. This is especially true for quantum-sensor-based gyroscopes. There are some examples of quantum sensors which can be built around standard materials science techniques, with nitrogen-vacancy centers being an example.

In the case of healthcare and diagnostics, the use of diamond nitrogen-vacancy sensors could yield new insights into the workings of the brain and body. Researchers at Harvard University have worked with these sensors to measure the magnetic field from the electrical current flowing in individual neurons.

One of the possible applications of quantum sensors has been demonstrated in a research collaboration between the Japanese National Institutes for Quantum and Radiological Science and Technology, the Bulgarian Academy of Sciences, and Sofia University St. Kliment Ohridski in Bulgaria. This collaboration has used a quantum sensor to achieve early diagnosis and preventative treatment through the detection of oxidative stress, which is associated with various diseases. The new sensor is appropriate for the early diagnosis of pathologies accompanied by inflammation, such as infectious diseases, cancers, neurodegeneration, atherosclerosis, diabetes, and kidney dysfunction.

The team developed a quantum sensor comprising a quantum dot, semiconductor, and core coated with a ring-shaped, sugar-like compound called cyclodextrin, which is bonded to six redox-sensitive chemical groups called nitroxide derivatives. This is to ensure the components are safe and considered generally harmless. Also, the nitroxide derivatives cause the sensor to give fluorescence signals when in a reduced state, which allow for the detection of oxidative stress, or a reduced cell or tissue capacity. The sensor is also bonded to a compound called triphenyl phosphonium, which helps the sensor enter living cells and proceed to the mitochondria where it can detect pathological conditions.

A research team, led by Professor Peter Kruger out of the Sussex University, have developed quantum sensors capable of sensing changes in the processing speed of the spinal cord to the brain. This can be useful in helping diagnose and treat diseases like Multiple Sclerosis.

A quantum sensor for magnetic resonance imaging (MRI) uses the signature of hydrogen nuclei in a magnetic field. This magnetic field is re-radiated when the water in the patient's body is pulsed with radio waves and provides contrast between the different tissues in the body. In this type of imaging, quantum sensors could improve sensitivity, portability, and cost, and similar technology could be applied in chemical analysis and explosive detection.

Atom interferometers have been used to develop gravimeters, which exploit the quantum-mechanical property of wave-particle duality. These gravimeters allow scientists to map variations in density below ground by recording gravitational fluctuations in both time and space. Unlike regular gravimeters, which are sensitive and require regular calibration, an absolute quantum gravimeter needs little to no maintenance, and they could be run continuously while experiencing no drift.

Professor Kai Bongs from Birmingham University is part of a team developing quantum gravity sensor or gravimeter capable of being twice as sensitive and ten times as fast as current equipment. The project uses rubidium atoms cooled by lasers to just above absolute zero that are propelled upward in a vacuum and measured as they fall back under gravity. 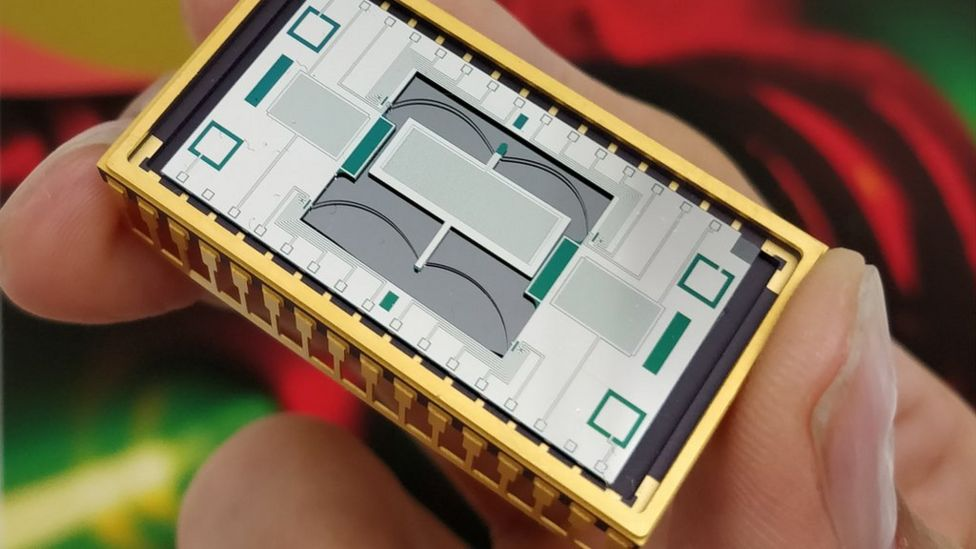 Example of the gravimeter developed by Glasgow University researchers.

At Mount Etna, in Sicily, researchers from Glasgow University and Italian volcanologists work to monitor the activity of the volcano, one of the more active volcanoes. The conventional equipment used for monitoring include seismometers, ground deformation recorders, gas monitors, infrared cameras, and satellite imagers to monitor the volcano. These instruments require frequent recalibration and movement in order to best monitor the volcano, which introduces risk to the researchers and scientists as they work in the volcanic environment. This has lead the team to use micro- and nano-fabrication techniques to make tiny quantum gravimeters on silicon wafers, similar to those developed by researchers at the Massachusetts Institute of Technology, and which are less expensive than conventional monitoring equipment. The sensor is a mass on a soft spring and where the spring sits is dependent on gravity. As gravity changes, the spring position changes. These sensors would be small and inexpensive enough to spread amongst the volcano, and are sensitive enough to make the necessary measurements for the researchers.

The sensitivity of the quantum atom interferometers (gravimeters) allow smaller objects to be detected at a greater burial depth. The sensor presents new applications in mineral prospecting or clearing brownfield sites. And the increase in usefulness of the sensor also presents a scenario in which cost and size will shrink with further development.

Another team from Glasgow university are developing a type of lidar that measures the arrival time of single photons with high accuracy and in trillionths of a second, faster than done with conventional lidar measures using pulsed lasers. This system would offer the lidar system the capability to develop a 3D image, and offer enhanced awareness through fog, smoke, and over longer distances. The system has already proven capable of detection people moving 100 meters away, and even when they are a few meters around a corner.

Just as quantum atom interferometers are sensitive to acceleration due to gravity, they can be used to sense acceleration due to motion and can be made to be sensitive to rotation. This provides the capability for developing the accelerometers and gyroscopes necessary for inertial navigation, especially in environments where external reference is unavailable. This is especially useful in the case of submarines, with the British Royal Navy working to develop quantum navigation systems.

Quantum gyroscopes work by generating a phase difference between atom waves propagating in opposite directions around a rotating ring. Researchers from Stanford University, in collaboration with the Defense Advanced Research Projects Agency (DARPA), have built prototype gradiometers, gyroscopes and accelerometers. The initial aim was to make inertial measurement units that could fit on a fingertip, however they have bene unable to shrink the gyroscopes below 100 cm3 due to the necessary laser and optical modulator subsystems.

One of the better known quantum effects, wave-particle duality, where light behaves sometimes as a wave and sometimes as a particle, has been used in the development of unbreakable communication systems. The properties can also be exploited for optical sensing, such as radar systems which cannot be spoofed or easily detected, and medical instruments with higher sensitivity.

Meanwhile, Rydberg atoms are being used in communication systems in military projects. The characteristics of this system is that the atom can operate over a wide band of frequencies. While a receive using Rydberg atoms have been shown to achieve the maximum performance theoretically allowed, limited by the fundamental collapse of the quantum wave-function. These atoms have delivered large bandwidths and have performed better than traditional receiver technology.

To achieve the Rydberg state, atoms are held in a glass cell at room temperature. Two colors of laser light are turned on the atoms to excite the Rydberg state and probe their reaction to the external electric fields.

As well as offering operation at a wide range of frequencies and delivering large bandwidths, these receiver systems can detect electromagnetic emissions up to the 20 GHz range, which includes the frequencies for Bluetooth, WiFi, and other communication methods. This allows the use of these systems to detect communication signals, but, because they do not absorb energy from a field they measure, this detection would be capable without alerting an opponent. Further, communication equipment using atoms in the Rydberg state could be protected from jamming or other forms of electromagnetic interference. However, the sensors and their related systems are large and power-hungry, proving difficult to be deployed.

Australia's Department of Defense Next Generation Technologies Fund, The Institute for Photonics and Advanced Sensing at the University of Adelaide

The Quantum Sensors project - a collaborative effort into developing quantum sensors for quality assessment and battery grading in the manufacturing line for electric vehicle battery manufacturing.

CoolBlue2 - project into developing laser technology for implementation in quantum sensors based on ultracold atoms; these sensors would be used to develop quantum sensors outside of the laboratory and for used in atomic spectroscopy, subsea communications, and medical instrumentation.

The development step by Northwestern University and University of Chicago scientists and researchers offers a potential boost to quantum computing and quantum sensing.

How quantum sensing is changing the way we see the world

Are quantum sensors the key to transforming our lives?