Marie Curie is a French-polish physicist and chemist.

Born Maria Sklodowska on November 7, 1867, in Warsaw, Marie was the youngest of five children, following siblings Zosia, Józef, Bronya, and Hela. Both of her parents were teachers, and her father, Wladyslaw, was a math and physics instructor. Bronislawa, Marie's mother, died from tuberculosis when Marie was ten years old. Marie was a bright and curious student, becoming one of the top students in her secondary school; however, she could not attend the male-only University of Warsaw. 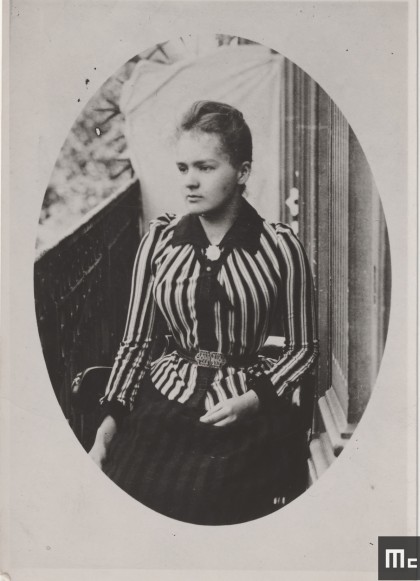 Marie worked as a tutor and a governess for around five years, studying physics, chemistry, and math in her spare time. In 1891, Marie made her way to Paris and enrolled at the Sorbonne. At that time, female students made up only 2 percent of the university. On her university enrollment form, Maria adapted her name to the more French‑sounding Marie. She graduated top of her class for the Licenciateship in Physics in July 1893. The following year, she graduated third in her class with a Licenciateship in Mathematical Sciences.

In 1894, while working with her mentor, Gabriel Lippmann (professor at the Sorbonne), Marie Sklodowska met Pierre Curie. Marie was commissioned by the Society for the Encouragement of National Industry to perform a study on the magnetic properties of certain steels, for which she had received a scholarship. As it was not an area of study she was familiar with, Marie was introduced to one of France’s experts in magnetism, Pierre Curie.

Pierre Curie had been the laboratory chief at the Municipal School of Industrial Physics and Chemistry in Paris (formally known as EMPCI, now called ESPCI) since 1882 and was already an experienced physicist. Pierre was known for his work on piezoelectricity, a discovery he made with his brother Jacques, and his work on magnetism and symmetry in physics.

The two began working together and married in 1895. 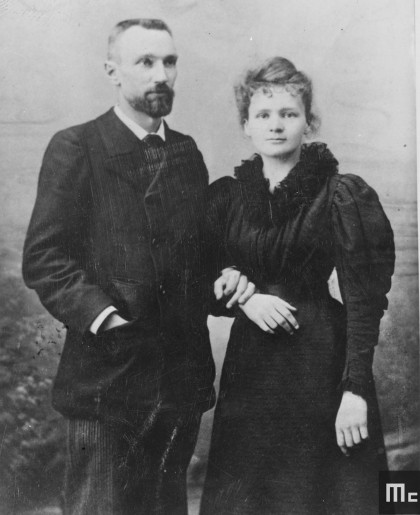 At first, Marie and Pierre worked on separate projects; however, after Marie began working on radioactivity, Pierre put aside his own work to help her with her research. In 1906, Pierre was killed in Paris after accidentally stepping in front of a horse-drawn wagon. Marie took over his teaching post at the Sorbonne, becoming the institution's first female professor.

In 1897, Marie and Pierre welcomed their first daughter, Irène. The couple had a second daughter, Ève, in 1904. Irène Joliot-Curie became a scientist, also winning the Nobel Prize in Chemistry in 1935. Joliot-Curie shared the honor with her husband, Frédéric Joliot, for their work on the synthesis of new radioactive elements. In 1937, Ève Curie wrote the first of many biographies devoted to her mother.

Marie Curie is known for her pioneering research on radioactivity, and together with her husband Pierre, discovering the radioactive elements polonium and radium while working with the mineral pitchblende. She also championed the development of X-rays after Pierre's death.

Curie developed ideas from French physicist Henri Becquerel, who discovered uranium producing rays weaker than the X-rays found by Wilhelm Conrad Röntgen. Curie conducted her own experiments on these "uranium rays" and discovered that they were constant, irrespective of the condition or form of the uranium. She theorized that the rays came from the element's atomic structure. This idea created the field of atomic physics. Curie herself coined the word "radioactivity" to describe the phenomena.

Following this idea, she continued working with her husband Pierre on the mineral pitchblende. The pair discovered a new radioactive element in 1898, naming the element polonium, after Curie's native country of Poland. They also detected the presence of another radioactive material within pitchblende, naming it radium. In 1902, Marie and Pierre Curie announced that they had produced a decigram (0.1 g) of pure radium, demonstrating the unique chemical element's existence.

When World War I began in 1914, Curie devoted time and resources to championing the use of portable X-ray machines. These medical vehicles would earn the nickname "Little Curies."

On December 12, 1903, it was announced that Marie and Pierre Curie were to be awarded, along with Henri Becquerel, the Nobel Prize in Physics:

in recognition of the extraordinary services they have rendered by their joint researches on the radiation phenomena discovered by Professor Henri Becquerel.

On December 10 1911, Curie was awarded the Nobel Prize in Chemistry by the Academy of Sciences in Stockholm and became the first person ever to win two Nobel Prizes.

in recognition of her services to the advancement of chemistry by the discovery of the elements radium and polonium, by the isolation of radium and the study of the nature and compounds of this remarkable element.

Curie died on July 4, 1934, of aplastic anemia, believed to be caused by prolonged exposure to radiation.

Marie Curie dies of aplastic anemia, believed to be caused due to prolonged exposure to radiation.
Marie Curie is awarded the Nobel Prize in Chemistry for the advancement of chemistry and the discovery of polonium and radium.
Marie Curie gives birth to her second daughter Ève.
Marie and Pierre, alongside Henri Bequerel, are announced as winners of the Nobel Prize in Physics for their work "on the radiation phenomena."
Marie and Pierre Curie discover the new element Polonium.

The pair discovers the element working with the mineral pitchblende. The element is named after Marie's home country, Poland.