Magnus Carlsen is a Norwegian chess grandmaster who is the reigning five-time World Chess Champion.

Depending on various calculations, Carlsen's net worth is believed to be around USD $50 million, earned through tournament prizes, YouTube channels, and endorsements. His endorsements have included deals with Mastercard, Skilling, and Instaforex. He is also the cofounder of the app Play Magnus AS for Android and iOS devices.

Carlsen was born in Tønsberg, Vestfold, Norway, to parents Sigrun Øen and Henrik Carlsen. Both of Carlsen's parents were engineers, and his father taught him to play chess at the age of five. He did not initially show an interest in playing chess but showed a general intellectual aptitude at an early age, often through different feats of memory. Initially, his desire to play chess grew from a desire to beat his older sister. He would then go on to replay games his father showed him and began reading chess books. Carlsen played his first tournament at age eight; he was coached by seven-time Norwegian Champion Simen Agdestein and by Tobjorn Ringdal Hansen. 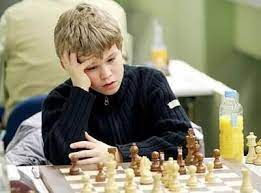 His breakthrough came in 2000 when he played in the Norwegian junior team championship, where he gained a tournament performance rating of around 2000. Over the course of the year, his FIDE rating rose from 904 to 1907. The next two years, from 2000 to 2002, Carlsen played almost 300 rated tournament games. He placed sixth in the European Under-12 Championship in Peñiscola. He tied for first place in the 2002 World Under-12 Championship in Heraklion, placing second to Ian Nepomniachtchi in a tiebreak. Carlsen then obtained his International Master in 2003 at twelve years and nine months, with a FIDE ranking of 2503. He obtained three IM Norms in quick succession in August 2003, which were required to become an International Master.

Carlsen came to greater notice in 2004, when at the age of thirteen he competed in the C group at the Chorus chess tournament in Wijk aan Zee. At the tournament, he lost only one game, received a score of 10.5 out of 13, and earned his first grandmaster norm. Notable to many observers in this tournament was Carlsen's win over Sipke Ernst, when he sacrificed pieces to reach a checkmate in twenty-nine moves. 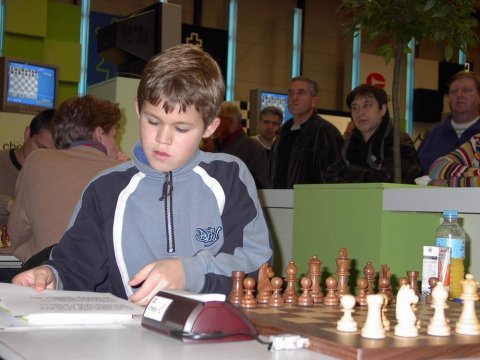 In February 2004, Carlsen obtained his second grandmaster norm, and in a blitz chess tournament in Reykjavik, Iceland, he made more headlines as he defeated former World Champion Anatoly Karpov, which led to a match against Garry Kasparov, the then top-rated player. Carlsen would draw in their first game and lose the second. In April 2004, Carlsen earned his third and final grandmaster norm at the sixth Dubai Open Chess Championship, making him, at thirteen, the second youngest grandmaster at the time.

Following being named a grandmaster, Carlsen set out to win his first world championship. He placed second at the Dubai Open Chess Championship in April 2004 and tenth at the 2005 World Chess Cup in Khanty-Mansisyk, Russia. In 2007, he became the youngest player at the time to earn a place at the Candidate Matches in Elista, Russia. At the Candidates, the top four players received a spot at the FIDE World Chess Championship the following year. But, at his first Candidates, Carlsen was defeated in the first round by Armenian Chess player Levon Aronian, who would place seventh. Carlsen then earned a victory at the Pearl Spring Chess Tournament in Nanjing, China in 2009, with 8 of a possible 10 points. In November, he won the World Blitz Championship in Moscow. 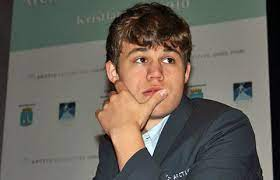 Magnus Carlsen during competition leading to him dropping out of the 2011 Candidate Matches.

In 2010, the FIDE announced Magnus Carlsen as the top player in the world at nineteen, making him the youngest player by that point to become a number one. He received sponsorship deals from companies such as G-Star, but he eventually surprised the chess world in November 2010 by announcing he would forgo the 2011 Candidate Matches to select a challenger of then world champion Viswanathan Anand. He argued that the structure for the championship was flawed and that a champion should have to prove themselves rather than receive an automatic spot in the final round. 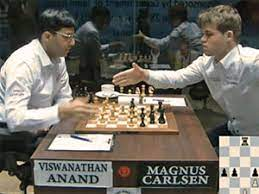 He returned in 2013 and participate in the Candidates Tournament in London; despite losing in the final round, Carlsen accumulated enough wins through the tournament to best Vladimir Kramnik and earn a spot to challenge Anand. In Chennai, India, during the World Championship match in November 2013, Carlsen played Anand in ten games and defeated Anand with three wins to seven draws. Carlsen became the second youngest player, after Kasparov, at the time to win the world title. 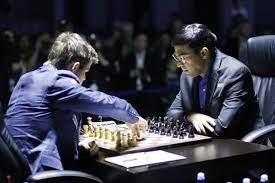 Rematch between Carlsen and Anand during Carlsen's first title defense. 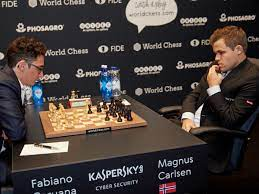 Carlsen during his 2018 title defense against Fabiano Caruana.

In 2016, during the World Championship tournament, Carlsen defended his title against Sergey Karjakin after twelve games. He defeated Karjakin by winning two games in a two-game rapid round, and the players had only twenty-five minutes on the clock. Carlsen won with the last move of the fourth game by sacrificing his queen to set up a checkmate in the next move. Again, in 2018, Carlsen defended his title at the world championship in London. He tied against American player Fabiano Caruana after twelve games but won three games in the tie-breaking rapid round. 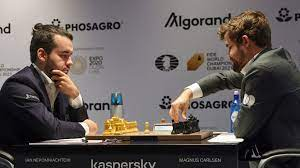 Carlsen-Nepomniachtchi during their record-setting game and Carlsen's title defense.

In 2021 Carlsen not only defended his title but won the championship title for the fifth time. He defended his title against Ian Nepomniachtchi in Dubai and won four of eleve games while drawing the rest. Carlsen's first win in the series, in the sixth game, set the record for the longest game ever played in a world chess championship, lasting for more than 136 moves in a period of seven hours and forty-five minutes.

From 2018 to 2020, Magnus Carlsen set a record for the longest undefeated streak in chess, in which he either won or drew 125 games. The streak broke the previous record of a 110-game streak set in 2005 by Sergei Tiviakov. This led into his 2021 title defense, and the streak would end in 2020 by Jan-Krzysztof Duda, his first defeat in two years. 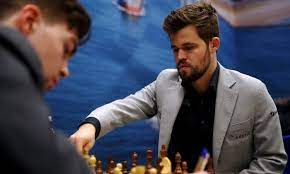 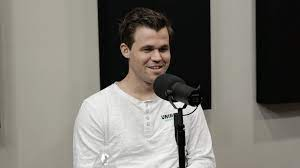 Magnus Carlsen explaining his decision to no longer defend his world championship.

In July 2022, Magnus Carlsen announced he would not defend his world championship in 2023. This shocked the competitive chess community, as Carlsen has been consistently ranked as the top chess player in the world since 2011 and is believed to be, at age thirty-one, to not only be at the top of his powers but to be able to win another championship. Speaking on his podcast, The Magnus Effect, Carlsen stated, about his decision to step away from the world championship:

The conclusion is very simple that I am not motivated to play another match. I simply feel that I don't have a lot to gain. I don't particularly like it, and although I'm sure a match would be interesting for historical reasons and all of that, I don't have any inclinations to play and I will simply not play the match.

Carlsen said during his announcement that his goal had been to win a world championship but he had as much competed to meet others' expectations of him as much as he did for his own interest, further stating the fourth and fifth world titles he won meant nothing to him, other than a job well done. However, it is not a retirement from competitive chess. Carlsen has stated he wants to continue playing to try and reach a FIDE score of 2900. This achievement has been likened to climbing Everest, especially based on the rating system.

The rating system is based on a mathematical formula that assigns each player a rating based on past results, and those ratings change based on a player's pre-match win probabilities. For Carlsen, this means every game he plays, a win only adds a limited number of points to his rating, while a draw decreases his rating. As well, training at the level needed to defend his championship is mentally and physically draining, often including a six-month pre-match training period. Carlsen, similar to other elite competitors, has found little benefit to being at the top, feeling he has more to lose in another title defense than he has to gain. And by leaving at this point in his career, Carlsen remains undefeated, while it leaves competitive chess in an interesting place with no champion to defend the championship.

As a chess player, Carlsen has been noted for his aggressive and unpredictable style. He uses a wide variety of openings to make it harder for his opponents to prepare, especially with the increase in computer-based tools, such as computer analysis, used to help chess players. Further, he has matured, as a player, to a style noted for its control of the board. Despite various commentators offering thoughts on Magnus Carlsen's style, it has been noted Carlsen has no preference in playing style but is capable of playing whatever kind of game emerges from his opponents. As his style has matured, it is noted that he prefers to play a game that is positional, taking a superior position from the open and grinding out an endgame, whether that is in place of a draw or a win.

Another part of Carlsen's chess game is his exhaustive memory. It has been said that he is capable of remembering around 10,000 games and has been able to, from memory, replicate games from his opponents. As well, this memory gives him broad chess knowledge, which gives Carlsen his flexibility in his thinking and, therefore, his playing. However, Carlsen is not big on chess preparation; rather, he prefers to play from instinct and through an analysis of his opponent, digging into patterns in their style and, where possible, his opponent's psychology.

Magnus Carlsen is also in good physical shape, living an active lifestyle outside of chess. It has been suggested that being in shape offers Carlsen more oxygenation to keep the brain working and improve the body's resistance or offers Carlsen a clear mind and better physical resistance to a long and tiring game. In the game, this can translate to fewer mental mistakes, especially over the course of a long competition.

Carlsen walks in like a deity, hints at being a mortal in a five-hour bout before he shows who is the boss

The chess games of Magnus Carlsen

The magic of Magnus: At the Chess Olympiad, everything and everyone stops for the king

Play Magnus AS
CEO of