Lotus Cars was founded and owned for many years by Colin Chapman. After his death and a period of financial instability, it was bought by General Motors, then Romano Artioli and DRB-HICOM through its subsidiary Proton. It is currently owned by Chinese multinational Geely, with Etika Automotive as an equity partner.

The engineering consultancy firm Lotus Engineering, an offshoot of Lotus Cars, has facilities in the United Kingdom, United States, China, and Malaysia. 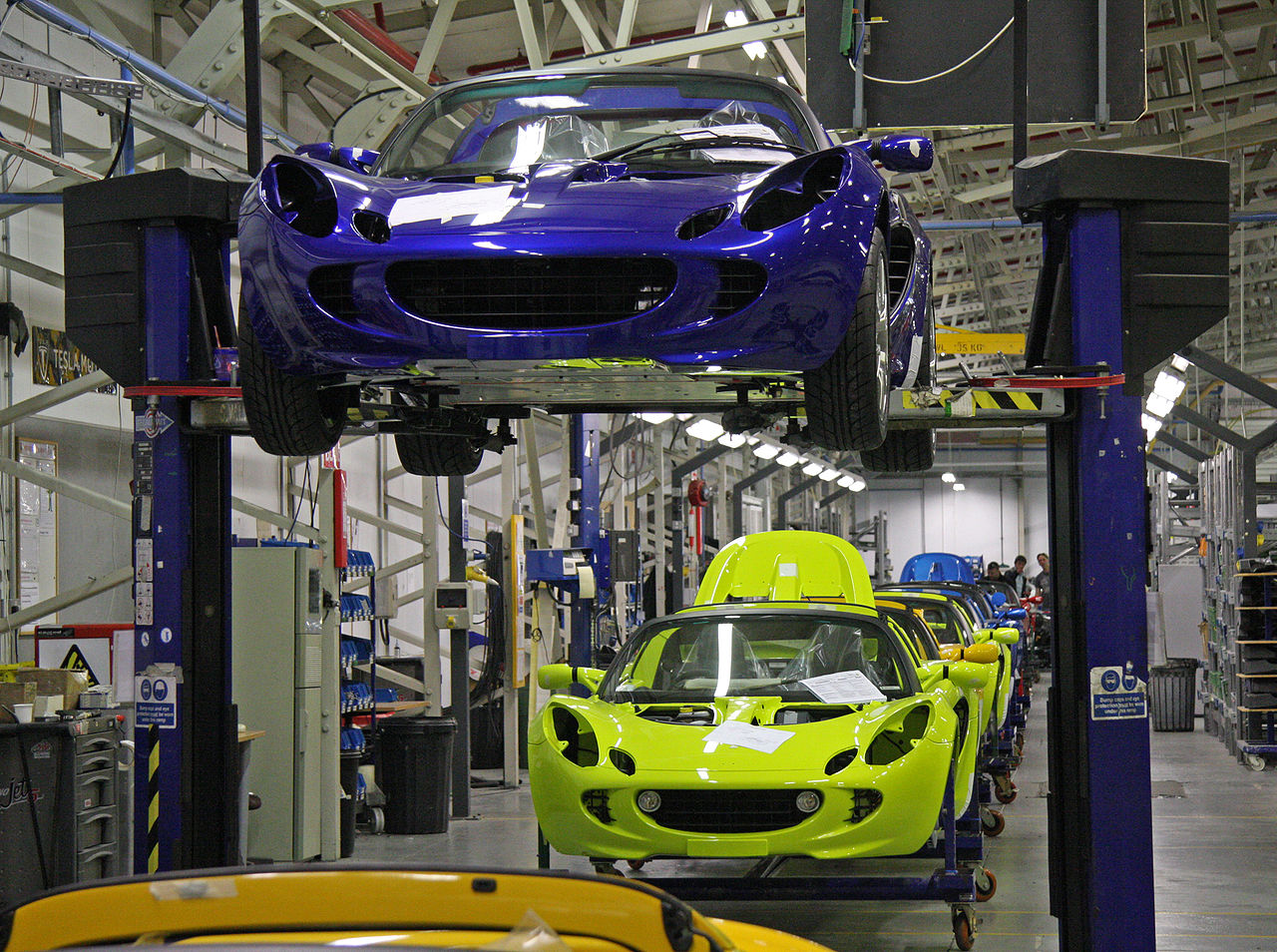 The company was formed as Lotus Engineering Ltd. by engineers Colin Chapman and Colin Dare, both graduates of University College, London, in 1952, but had earlier origins in 1948 when Chapman built his first racing car in a garage. The four letters in the middle of the logo stand for the initials of company founder, Anthony Colin Bruce Chapman. When the logo was created, Colin Chapman's original partners Michael and Nigel Allen were led to believe that the letters stood for Colin Chapman and the Allen Brothers.

The first factory was situated in old stables behind the Railway Hotel in Hornsey, North London. Team Lotus, which was split off from Lotus Engineering in 1954, was active and competitive in racing from 1958 to 1994. The Lotus Group of Companies was formed in 1959. This was made up of Lotus Cars Limited and Lotus Components Limited, which focused on road cars and customer competition car production, respectively. Lotus Components Limited became Lotus Racing Limited in 1971 but the newly renamed entity ceased operation in the same year.

The company moved to a purpose built factory at Cheshunt in 1959 and since 1966 the company has occupied a modern factory and road test facility at Hethel, near Wymondham in Norfolk. The site is a former World War II airfield, RAF Hethel, and the test track uses sections of the old runway.

In its early days, Lotus sold cars aimed at privateer racers and trialists. Its early road cars could be bought as kits, in order to save on purchase tax. The kit car era ended in the late 1960s and early 1970s, the Lotus Elan Plus Two being the first Lotus road car not to be offered in kit form, and the Lotus Eclat and Lotus Elite of the mid-1970s being offered only in factory built versions.

After the elegant but delicate Lotus Elite of the 1950s, which featured a complete fibreglass monocoque fitted with built-in steel pickup points for mounting major components, Lotus found critical and sales success in the 1960s with the Lotus Elan two seater later developed to two plus two form. Lotus was notable for its use of fibreglass bodies, backbone chassis, and overhead camshaft engines, initially supplied by Coventry Climax but later replaced by Lotus-Ford units (Ford block, Lotus head and twin cam valve gear). Lotus worked with Ford on the Lotus Cortina, a successful sports saloon.

Another Lotus of the late 1960s and early 1970s was the two seater Lotus Europa, initially intended only for the European market, which paired a backbone chassis and lightweight body with a mid mounted Renault engine, later upgraded to the Lotus-Ford twin cam unit as used in the Elan.

Lotus Seven, originating in the 1950s as a simple, lightweight open two seater continued in production into the early 70s. Lotus then sold the rights to produce the Seven to Caterham, which has continued to produce the car since then.

By the mid-1970s, Lotus sought to move upmarket with the launch of the Elite and Eclat models, four seaters aimed at prosperous buyers, with features such as optional air conditioning and optional automatic transmissions. The mid engined line continued with the Lotus Esprit, which was to prove one of the company's longest lived and most iconic models. Lotus developed its own series of four cylinder engines, the Lotus 900 series, and later a V8, and versions of the engines appeared in the Esprit.

Variants of the 900 series engine were supplied for the sports car and the Sunbeam Lotus "hot hatchback". In the 1980s, Lotus collaborated with Vauxhall Motors to produce the Lotus Carlton, the fastest roadgoing Vauxhall car.

By 1980, Group Lotus was in serious financial trouble. Production had dropped from 1,200 units per year to a mere 383. The combined reasons were that the world was in the middle of an economic recession, sales in the key United States market had virtually collapsed, along with limited development of the then model range.

In early 1982, Chapman came to an agreement with Toyota to exchange intellectual property and applied expertise. This initially resulted in Lotus Engineering helping to develop the Mk2 Toyota Supra, also known as the Toyota Celica XX. Secondly, it allowed Lotus to launch the new Lotus Excel to replace the ageing Lotus Eclat. Using drivetrain and other components from Toyota enabled Lotus to sell the Excel for £1,109 less than the outgoing Eclat.

Chapman died of a heart attack on 16 December 1982 at the age of 54, having begun life an innkeeper's son and ended a multi-millionaire industrialist in post-war Britain. At the time of his death, the car maker had built thousands of successful racing and road cars and won the World Championship seven times.

At the time of his death, both Chapman and Lotus were linked with the DeLorean Motor Company scandal over the use of UK Government subsidies for the production of the DMC DeLorean, for which Lotus had designed the chassis. Chasing large sums of money which had disappeared from the DeLorean company, Lotus was besieged by Inland Revenue inspectors, who imposed an £84 million legal "protective assessment" on the company. Chapman died before the full deceit unravelled but, at the subsequent trial of Fred Bushell, the Lotus accountant, the judge insisted that had Chapman himself been in the dock, he would have received a sentence "of at least 10 years".

With Group Lotus near bankruptcy in 1983, David Wickins, the founder of British Car Auctions, agreed to become the new company chairman, through an introduction from his friend Mark Thatcher. Taking a combined 29% BCA/personal stake in Group Lotus, Wickins negotiated with the Inland Revenue, and then brought in new investors: merchant bank Schroeder-Wagg (14%); Michael Ashcroft's Bermudian operating company Benor (14%); Sir Anthony Bamford of JCB (12%). Wickins oversaw a complete turnaround in the company's fortunes, which resulted in him being called "The saviour of Lotus".

Despite having employed designer Peter Stevens to revamp the range and design two new concept cars, by 1985 the British investors recognised that they lacked the required capital to invest in the required new model development to production, and sought to find a major motor manufacturing buyer. In January 1986, Wickins oversaw the majority sale of the Group Lotus companies and 100% of North American–based LPCI to General Motors, with engineer Bob Eaton a big Lotus car fan.After four months of controlling but co-owning Group Lotus with Toyota, the Japanese company sold out to GM. By October 1986, GM had acquired a 91% stake in Group Lotus for £22.7 million, which allowed them to legally force the company buyout.

On 27 August 1993, GM sold the company, for £30 million, to A.C.B.N. Holdings S.A. of , a company controlled by Italian businessman Romano Artioli, who also owned Bugatti Automobili SpA. In 1996, a majority share in Lotus was sold to Proton, a Malaysian car company listed on the Kuala Lumpur Stock Exchange.

Lotus Cars were awarded the Queen's Award for Enterprise for contribution to International Trade, one of 85 companies receiving the recognition in that category in 2002. Lotus cars wore the badge of the award for a number of years.

On 24 May 2017, Chinese multinational Geely announced that was taking a 51% controlling stake in Lotus. The remaining 49% were acquired by Etika Automotive, a holding company of major shareholder Syed Mokhtar Albukhary

In January 2021 Lotus' parent company Geely announced a joint venture with Renault–Nissan–Mitsubishi Alliance and their division to develop a range of electric performance cars sharing some of their future platforms. In April 2021 Lotus announced plans to produce only electric cars by 2028 and increase production numbers from around 1,500 per annum to tens of thousands. Geely and Etika Automotive provided two billion pounds (US$2.8 billion) to fund the changes.

As well as sports car manufacture, the company also acts as an engineering consultancy, providing engineering development—particularly of suspensions- for other car manufacturers. Lotus's powertrain department is responsible for the design and development of the 4-cylinder engine found in many of GM's Vauxhall, Opel, Saab, Chevrolet and Saturn cars. The US Lotus Elise and Exige models used the 1.8L VVTL-i I4 from Toyota's late Celica GT-S and the Matrix XRS both of which are no longer available new. The new Exige has the same V6 engine as its bigger counterpart the Evora and is not available in the US as a road-legal vehicle.

Michael Kimberley, who had been a guiding figure at Lotus in the 1970s, returned and took over as the Acting chief executive officer of the Company and its Group from May 2006. He chaired the Executive Committee of Lotus Group International Limited ("LGIL") established in February 2006, with Syed Zainal Abidin (managing director of Proton Holdings Berhad) and Badrul Feisal (non-executive director of Proton Holdings Berhad). LGIL is the holding company of Lotus Group Plc.

Kimberley retired as CEO on 17 July 2009,[23] replaced on 1 October 2009 by the former Senior Vice-President for Commercial & Brand at FerrariDany Bahar. Bahar intended to drive the brand up-market into the expanding global luxury goods sector, effectively away from the company's traditional light weight simplicity and pure driving experience focus.

Bahar was suspended as CEO on 25 May 2012 on a temporary basis, while an investigation into his conduct was undertaken.[24] Lotus announced on 7 June 2012 the termination of Bahar's employment and the appointment of Aslam Farikullah as the new chief operating officer. The ambitious plans for several new models were subsequently cancelled following Bahar's departure. Jean Marc Gales replaced Bahar as the CEO of the company in 2014 and enabled the company to make a profit after decades in 2017, due to his effective market plans and strategies before he left the company in June 2018 due to personal reasons, and was replaced by Feng Qingfeng from Lotus Group's parent company, Geely.