Famous As: Former Prime Minister of the United Kingdom

Who was Winston Churchill?

Winston Churchill was the Prime Minister of the United Kingdom from 1940 to 1945 and again from 1951 to 1955. A multi-faceted man, he was also an officer in the British Army, a writer and a historian. As a young army man he witnessed action in the Anglo–Sudan War and the Second Boer War, and received much praise for his work as a war correspondent. Born as the son of a prominent politician hailing from an aristocratic family, he grew up to be a rebellious boy who hated formal education and did poorly in school. As a young man he embarked on a military career and visited several countries including India, Cuba and Egypt where he witnessed bloody battles and was even imprisoned. He served as both soldier and journalist, and was greatly appreciated for his work as a war correspondent. Eventually he left the army and ventured into politics where he enjoyed even greater success. Intelligent and charismatic, he proved to be a popular politician and held many political and cabinet positions. He became the Prime Minister during a highly tumultuous period in history when the World War II was in full swing. He managed the political affairs with great tact and successfully led Britain as Prime Minister until victory over Nazi Germany had been secured. In recognition of all that he had done for the nation, he is widely counted amongst the most influential people in British history. During the Cuban War of Independence, he travelled to Cuba; he had obtained a commission to write about the conflict from the ‘Daily Graphic’ as a war-time correspondent. He returned to England when he learned that his nanny Elizabeth Ann Everest was dying.

In 1896, he was transferred to British India where he worked as both soldier and journalist on the North-West Frontier in 1897. His journalistic works became very popular during this period and helped to establish him as a successful writer.

In 1897, Churchill fought against a Pashtun tribe in Malakand—now in Pakistan—under the leadership of General Jeffery. After the victory of the British Army he wrote an account of the fight, which was published in 1900 as ‘The Story of the Malakand Field Force’ for which he received £600.

Transferred to Egypt in 1898, he served in Sudan under the command of General Herbert Kitchener. There he participated in the Battle of Omdurman before returning to Britain. Churchill resigned from the British Army in May 1899. 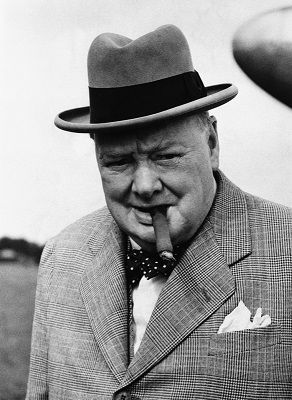 Winston Churchill was born in United Kingdom of Great Britain and Northern Ireland.

A History of the English-Speaking Peoples

Who was Winston Churchill? Everything You Need to Know

Prime Minister of the United Kingdom