Who was Whitney Houston?

The American singer, actress, model, and producer, Whitney Houston is one of the world’s most successful female entertainers of all time. Having been exposed to a family with a musical background, the naturally talented beauty became inspired to sing and play the piano at an early age. She entered the entertainment industry by touring nightclubs with her mother, while singing and modeling, until eventually signing her own recording contract and coming out with her debut album. This musical introduction would not only become her best-selling studio album to-date, but would earn her a Grammy, thrusting her into super-pop-stardom, followed by a string of Hollywood film features and production efforts. Throughout her career, she released seven studio albums and three movie soundtrack albums, winning her various awards. Her powerful voice, spirit, and beauty redefined the image of a soul artist. As much as the renowned singer was an international icon and inspiration to females, emerging recording artists, and the community, she also faced some personal challenges that would impair her influential status. From drug addictions to a troubled relationship with husband Bobby Brown, Houston’s reputation was painted with a series of eventful ups and downs before she ultimately succumbed to her tragic death 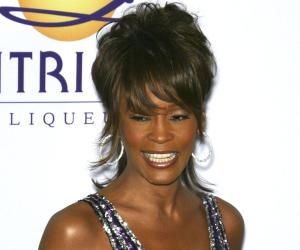 In 1977, she was a backup singer for Michael Zager Band’s single ‘Life’s a Party’ and the following year she sang on Chaka Khan’s single ‘I’m Every Woman’. She was offered an opportunity to sign with a recording company, but her mother declined so she would finish high school.

In the early 1980s, at seventeen, she worked as a model, appearing in several magazines including, ‘Seventeen’, where she became the first African American to be featured on the cover. She also took on acting gigs appearing in TV show episodes such as, ‘Gimme a Break’, while continuing to develop her vocal skills.

In 1983, she signed with ‘Arista Records’. President Clive Davis spent the next couple years assembling lyricists and producers to balance her gospel-like sound with contemporary melodies.

In 1985, her debut album, ‘Whitney Houston’ gradually became the number one selling album of her career. She received numerous accolades and toured sold-out concerts in the U.S. and Europe.

Through the late 1980s, hits rocketed to the top of billboard charts. She reached a record of seven consecutive number one hits and became the first woman to produce four number-one singles from one album. In 1991, while contemplating an acting career and lead role in ‘The Bodyguard’, she performed her legendary rendition of the national anthem at the ‘Super Bowl’.

In 1992, she married singer Bobby Brown, who she had met a few years prior. She accepted the role in ‘The Bodyguard’, and was pregnant with daughter, Bobbi Kristina for most of the filming.

The picture grossed $390 million at the box office and its soundtrack produced one of the longest-running, number one singles of all time, Houston’s version of Dolly Parton’s ‘I Will Always Love You’.

Who was Whitney Houston? Everything You Need to Know