Creative work whose interpretation generally involves movement of the body

Modern dance is a term that describes many types of dance techniques. It is a category of dance styles, often referred to as a genre of dance. Many of the main styles in this genre are credited to specific choreographers who pioneered new and unique ways of moving and created new movement vocabularies based on their personal philosophies: their views of how dance functions as an artistic tool.

Lyrical dance is most often performed to songs with lyrics and is all about smooth, fluid movement and expression of emotions. The music can be of a wide range of genres, as long as it is emotionally charged and expressive, and the lyrics/nature of the music used will serve as inspiration for choreography. This style of dance is a fusion of jazz and ballet styles. 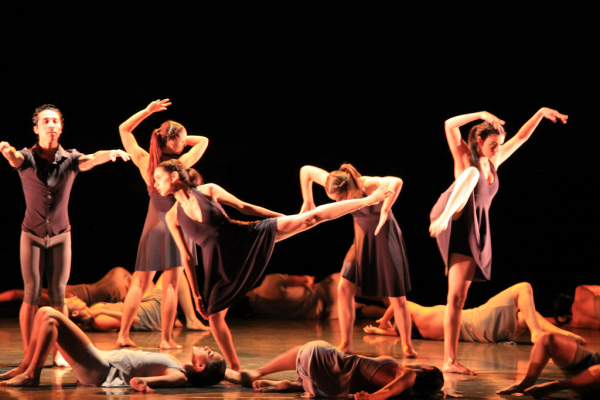 Archeological evidence for early dance includes 9,000-year-old paintings[citation needed] in India at the Rock Shelters of Bhimbetka, and Egyptian tomb paintings depicting dancing figures, dated c. 3300 BC. It has been proposed that before the invention of written languages, dance was an important part of the oral and performance methods of passing stories down from one generation to the next. The use of dance in ecstatic trance states and healing rituals (as observed today in many contemporary "primitive" cultures, from the Brazilian rainforest to the Kalahari Desert) is thought to have been another early factor in the social development of dance.

Dance is generally, however not exclusively, performed with the accompaniment of music and may or may not be performed in time to such music. Some dance (such as tap dance) may provide its own audible accompaniment in place of (or in addition to) music. Many early forms of music and dance were created for each other and are frequently performed together. Notable examples of traditional dance/music couplings include the jig, waltz, tango, disco, and salsa. Some musical genres have a parallel dance form such as baroque music and baroque dance; other varieties of dance and music may share nomenclature but developed separately, such as classical music and classical ballet. The choreography and music go hand in hand, as they complement each other to express a story told by the choreographer and or dancers.

Take Me With You