Torn Curtain is a 1966 American political thriller film directed by Alfred Hitchcock, and starring Paul Newman and Julie Andrews. Written by Brian Moore, the film is set in the Cold War. 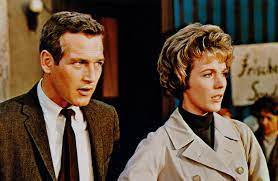 American physicist Michael Armstrong (Paul Newman) shocks his friends and family by defecting to East Germany to work with the Soviets during the height of the Cold War. Even his fiancée (Julie Andrews) is surprised by the move, but when she follows him behind the Iron Curtain, she discovers that her husband-to-be isn't a spy, but a double agent working to discover Soviet nuclear secrets. As they plot a way to escape back to America, his cover is blown, putting both of their lives in jeopardy.