Who was Paul Newman?

Paul Newman was an Academy Award-winning American actor, accomplished entrepreneur, professional race driver, activist, and philanthropist. Famous for his dashing looks and striking blue eyes, he is regarded as one of the most handsome men to have graced Hollywood. A highly talented actor with multiple awards for his performances, he was also a successful race driver with several national championships to his name. The son of a sports store owner, he acquired his penchant for acting from his theater-loving mother. Though he was more interested in athletics, he went on to participate in many school plays. As a young man, he enlisted in the U.S. ‘Navy Air Corps,’ and served as a radio operator during ‘World War II.’ After the war, he studied drama and ventured into Broadway. He got noticed for his good looks and well-built physique which landed him film roles in Hollywood. It did not take him long to establish himself as a successful actor, and he went on to appear in films like ‘The Hustler’ and ‘The Color of Money.’ In addition to being an actor, he was also an entrepreneur who co-founded a food company called ‘Newman's Own.’ The legendary actor was also well-known for his involvement in philanthropic activities. 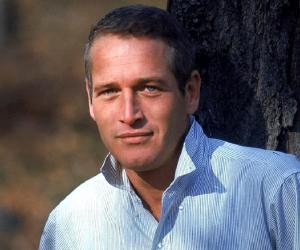 Paul Newman enlisted in the U.S. ‘Navy Air Corps,’ and served as a radio operator during ‘World War II.’ Upon his return, he completed his Bachelor of Arts degree in drama and economics from ‘Kenyon College’ in 1949.

He started working with summer stock companies and toured with them, developing his acting skills in the process. He furthered his skills at the ‘Yale School of Drama’ and then moved to New York City to study under Lee Strasberg at the ‘Actors Studio.’

He made his Broadway debut in William Inge's ‘Picnic’ in 1953. During this time, he also started appearing on television, and made his Hollywood debut as well. Unfortunately, his first film ‘The Silver Chalice’ (1954) was a flop.

He finally gained attention for his good looks and acting skills in 1956 when he appeared as ‘Rocky Graziano’ in ‘Somebody Up There Likes Me.’ He followed it up with another hit in 1958, starring opposite Elizabeth Taylor in ‘Cat on a Hot Tin Roof.’

His successful career continued throughout the 1970s and 1980s. In 1986, he appeared in ‘The Color of Money’ in which he played the role of ‘Eddie Felson.’ His performance in the film won him many awards and accolades. He remained active in films well into the last decade of his life.

Apart from being passionate about movies, he also had a deep interest for motorsports. He was a frequent competitor in the events organized by ‘Sports Car Club of America’ (SCCA), and won several national championships as a race driver.

Who was Paul Newman? Everything You Need to Know