Swarm robotics describe the use of many connected small robots acting with a collected intelligence similar to schools of fish or colonies of ants.

Swarm robotics is an approach to the coordination of multiple robots as a system consisting of large numbers of mostly physical robots. From this large number, collected behavior is expected to emerge from the interactions between the individual robots and the mass of robots with the environment. The approach to swarm robotics emerged from artificial swarm intelligence and the biological studies of insects, where swarm behavior occurs.

Swarm robotics sees multiple interconnected robots in which each individual robot has processing, communication, and sensing capabilities locally and are able to interact with each other and react to the environment autonomously and as a mass. The individual robots are connected through specifically designed robotic systems and algorithmic approaches to make the artificial swarms collaboratively work toward a common goal.

Swarm robots can be defined with a set of criteria to better understand what differentiates a swarm robotics system from other multi-robot systems: 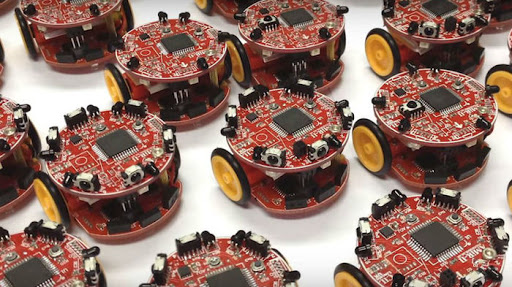 The swarm is intended to operate without any central control and act according to simple and local behavior. Through their interactions a collective behavior emerges and is able to solve complex tasks. These characteristics lead to the main advantage of swarms: adaptability, robustness, and scalability. Swarms can be considered as a kind of quasi-organism capable of adapting to change in the environment by following specific behaviors, including: 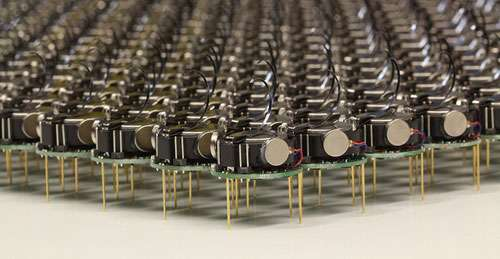 An early example of a swarm robotics system developed by the Wyss Institute at the Harvard School of Engineering and Applied Sciences, Kilobots, meaning "one thousand robots" have proven capable of exhibiting complex swarming behaviors. These behaviors include foraging and firefly-inspired synchronization. The Kilobot behavior has also inspired underwater swarming robots using a vision system to coordinate movements like schools of fish. The robots are designed with specific sensor technology, micro-actuators, and controllers allowing them to adapt to changing conditions and in order to perform tasks in natural environments, including pollinating fields, constructing buildings, or stacking sandbags along a vulnerable coast. The technology has since been licensed to K-Team Corporation for research and education.

The desirable properties of swarm robotics offer systems which are able to cope with the failure of one or more constituent robots, and that such a loss would not imply the failure of the whole swarm. The fault tolerance is aided by high redundancy of the swarm, nor should a swarm rely on any centralized control entity (either robotic or human), any leader robots, or individual robot playing a defined or specialized role. The swarm should be able to cope with changes in group size, such that the loss or removal of a robot does not change the behavior of the swarm, nor should the introduction of individual robots. 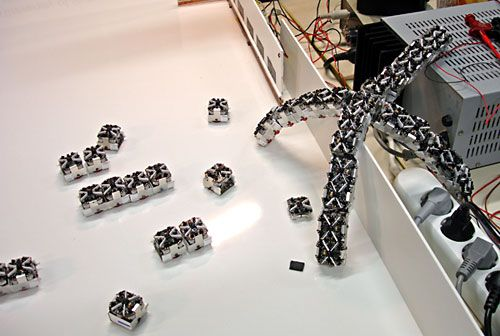 Example of swarm robots maneuvering over an obstacle.

For example, in the case of Harvard's Kilobots, the swarm is capable of building a brick wall once given the final design and a set of rules for operating rules. The team will work around each other and when a robot malfunctions or fails to complete a section, the remainder of the swarm will continue to work together to finish the wall and fill in any missed spots or sections.

The design of a swarm of robots is split into the software or artificial intelligence design and the physical design. With both working towards the ability for the swarm to complete harder physical tasks with greater power and precision than humans, and able to use their artificial intelligence as a swarm to complete cognitive tasks, such as identifying trends, learning from mistakes, and coordinating actions between numerous units.

The software design of a robot swarm is done to reflect requirements at a collective level, with the need to define hardware and behavior at the level of individual robots in order for the swarm to interact in such a way as to meet the desired swarm behavior. The approach to developing this behavior is divided into two categories:

In manual design, much as the name suggests, a trial-and-error process is used to develop the behaviors of individual robots until the desired collective behavior is obtained. The software architecture commonly adopted in swarm robotics is the probabilistic finite state machine. And another approach is based on virtual physics. In both, the main limit of manual design is the ingenuity and expertise of the human designer.

In automatic design an evolutionary robotics approach is taken. Individual robots are controlled by a neural network whose parameters are obtained through artificial evolution. This approach has been used for the development of several collective behaviors, including collective transport and development of communication networks. The main limit of this approach is the difficult and labor intensive task of defining an effective evolutionary setting.

There could also be a hive "operating system" which could allow a user to program colonies of robots to perform tasks in natural environments. This operating system would give a user greater control over the defined behaviors of the swarm to accomplish tasks such as pollinating a field, constructing buildings, or stacking sandbags.

In either of these settings, subsystems have their own intelligence and software settings. This includes the use of computer vision, machine learning, and artificial intelligence systems to help swarm robots understand and navigate their environment. MiR's AI camera, in particular, helps robots avoid obstructions and helps notify the overall swarm of the obstruction. The camera has to be customized to the swarm and for defined behaviors based on understood obstacles and features, which makes it especially useful in understood space such as a warehouse, but less capable in changing landscapes.

For communication amongst the swarm, the use of radio or blockchain protocols have been used. With the use of communication between cloud computing systems and robot swarms, working on similar principles to internet-of-things ecosystems, allow robots to communicate in understood and designed environments. This sees the swarm robots act as nodes, but they would continue to need real-time data processing, support, and response whether by humans or robots to help inform the autonomous robot actions and responses.

While the use of blockchain-based smart contracts can be used in less secure environments. Smart contracts, in this context, allow the swarm to secure their coordination communications and help to identify the presence of Byzantine robots, or robots with arbitrarily faulty or malicious behavior. This process has largely been used in studies.

Swarm robotics systems are generally developed from inexpensive or cost effective parts. A research team at the Department of Mechanical Engineering at the University of Toronto have developed a modular robot for swarm robotic integrations, from cost effective parts that can autonomously change shape and perform different functions. Similar to that, most swarm robots would need to use lightweight lithium polymer batteries, with a design to teach the robot to find a docking station for recharging when the individual robot runs low on power. 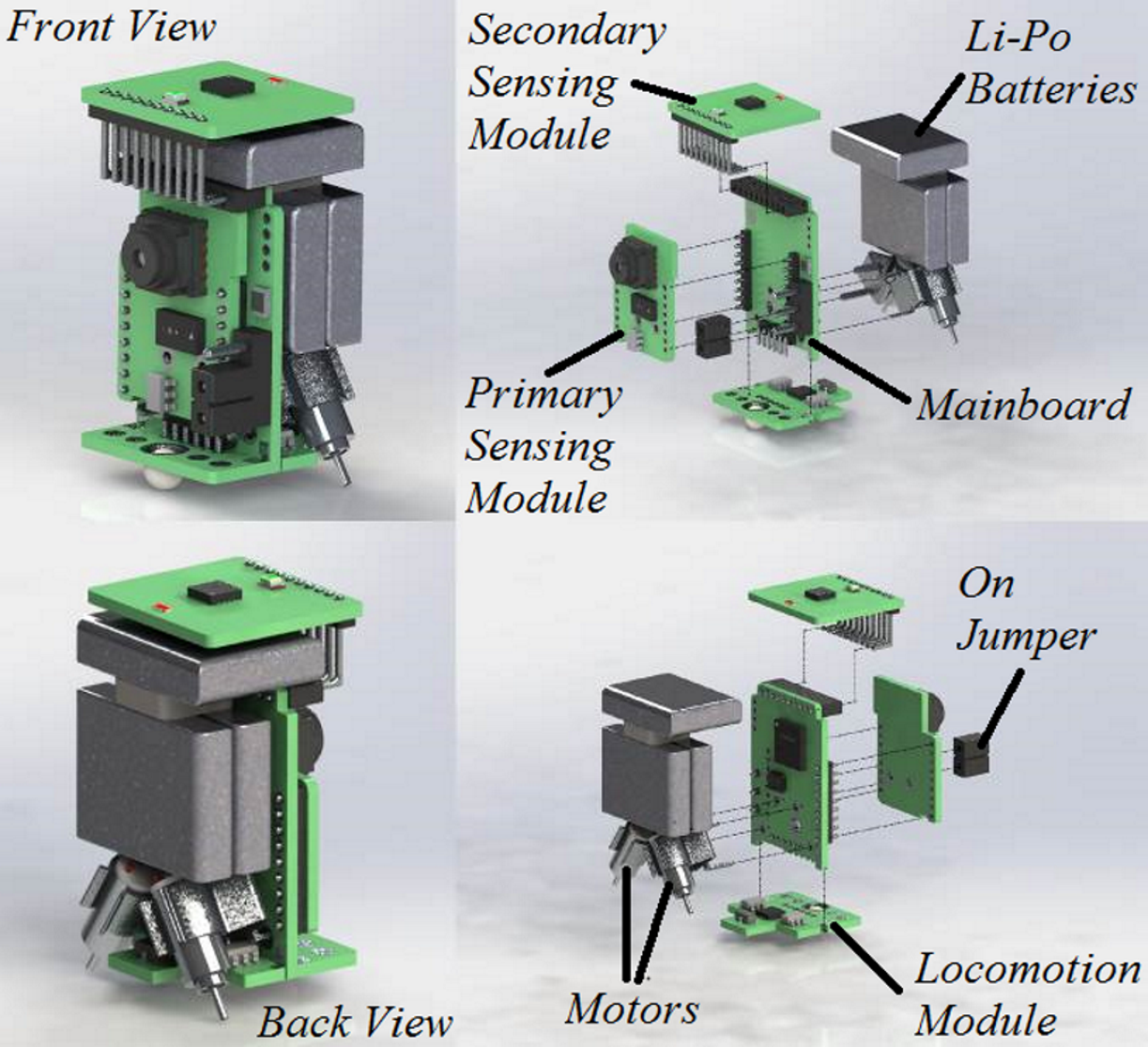 For use in specific swarm robotics groups, especially in agriculture, the swarm use unmanned aerial vehicles, or commercial drones, with existing multi-rotor designs and on-board cameras and have vision processing, radio communication systems, and protocols added to support safe swarm operations and reduce the price and difficulty of develop swarms.

The Defense Advanced Research Projects Agency (DARPA) approved the development of swarm drones called "Gremlins" named after creatures British pilots viewed as good luck charms during World War Two. DARPA's Gremlins are micro-drones, 3D printed unmanned aerial vehicles, launched from a canister and instructed to find each other in the air. DARPA is developing a way for weaponized drones to work with little human input, especially in situations where communications networks, such as GPS, are unavailable. Multiple navies are developing and testing swarm robotics, similar to Gremlins, for intelligence gathering by aerial, surface, and underwater drones. NASA has also developed swarm robotics for space missions based on the behavior and movements of ants.

Thales Group, a French multinational company, designs and builds electric systems and services for the aerospace, defense, transportation, and security markets. This includes their Watchkeeper WK450, an unmanned aerial vehicle used by the British Army, and the SWARM MW (multi-weapon) system, which is a self-contained, stabilized weapon and sensor system that can be fitted to most types of military and civil vehicles, naval and coastguard vessels, and fixed platforms. The SWARM can accommodate a wide range of low caliber weapons and visual sensors to meet most applications. The SWARM can also be integrated with fire control systems and can accept inputs from sighting systems and gyroscopes.

An Introduction to Swarm Robotics

How Swarm Bots will Change the Construction Industry

Swarm Robotics and the Future of the Military - Harvard Political Review

Swarm Robotics: Taking a Cue from Bees and Birds

A Swarm of One Thousand Robots