Device to initiate and control a sustained nuclear chain reaction

Nuclear reactor are a class of devices that initiate and control a self-sustaining series of nuclear fissions. Formerly known as an atomic pile, nuclear reactors are used as power plants for electricity generation, as research tools, as systems for the production of radioactive isotopes, and in nuclear marine propulsion. As of early 2019, the IAEA reports there are 454 nuclear power reactors and 226 nuclear research reactors in operation around the world.

Nuclear reactors were originally designed for thirty to forty year operating lives. However, through investment in systems, structures, and components, many of these reactors can be and have been extended for forty to sixty year lives.

The most common and basic type of fuel is uranium. Pellets of uranium are assembled in nuclear rods arranged in fuel assemblies in the reactor core. There can be 51,000 fuel rods with over 18 million pellets of uranium in a core.

The moderator is material in the core to slow the neutrons released from fission in order to cause more fission. Moderator is often water, but can be heavy water or graphite as well.

Control Rods are constructed from neutron-absorbing material inserted or withdrawn from the core to control the rate of reaction or stop a reaction. These rods are often constructed of cadmium, hafnium or boron.

Coolant circulates through the core to transfer heat from it. Light water reactors uses water for moderator and coolant. In some reactors there is water used for coolant and a secondary circuit used for the generation of steam. Primary coolants include water or heavy water, helium, carbon dioxide, sodium, lead or lead-bismuth eutectic, flouride salts, and chloride salts.

This often steel vessel contains the reactor core, moderator and coolant. It can also be a series of tubes holding the fuel and conveying coolant through a moderator.

Pressured water reactors use high-pressure coolant to bring heat from the reactor and make steam in order to turn a turbine and generate electricity. These generators act as heat exchangers like those found in a car radiator.

The containment structure houses the reactor and steam generators and is designed to protect it from outside intrusion and protect those outside from the radiation effects or malfunction of the reactor. Usually these containment structures are built from metre-thick concrete and steel. Newer Russian reactors install core melt localisations devices to catch melted core material in the case of an accident. 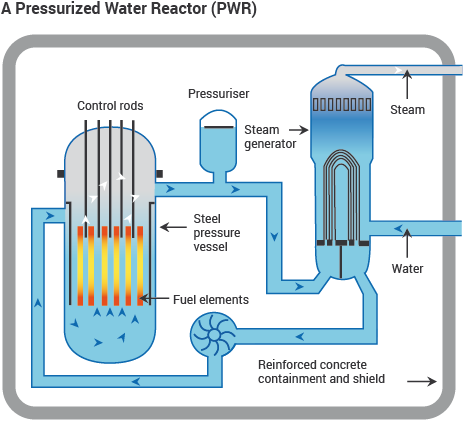 Nuclear fission is a process through which a heavy atomic nucleus splits in two smaller fragments. These fragments, in an excited state, emit neurons, photons, and subatomic particles. The emitted neurons cause new fissions, which in turn yield more neutrons, and continue a self-sustaining series of fissions through chain-reactions. The energy released in this process is the basis of a nuclear power system. Uranium-235 and plutonium-239 are the common atomic nuclei used for the fission process. For a nuclear reactor to control the chain reactions, control rods containing neutron poisons and moderators are used to change the portions of neutrons causing more fission.

The course of a chain reaction is determined by a neutron released in fission causing a subsequent fission. A typical fission interaction takes place on the order of one picosecond (10−12 second). This extremely fast rate does not allow enough time for a reactor operator to observe the system's state and respond appropriately. Fortunately, reactor control is aided by the presence of so-called delayed neutrons, which are neutrons emitted by fission products some time after fission has occurred. The concentration of delayed neutrons at any one time (more commonly referred to as the effective delayed neutron fraction) is less than 1 percent of all neutrons in the reactor.

The process of nuclear fission creates a large amount of heat. This heat is passed to a working fluid (water or gas), which in turn runs through steam turbines. These turn electrical generators' shafts. Nuclear generated steam in principle can be used for industrial process heat or for district heating. In many reactors, the water boiled for steam generation is kept separate from the reactor by a different coolant, except in the case of a boiling water reactor, which uses the boiling water as coolant.

Leó Szilárd patented the idea for the nuclear reactor in 1933, a year after the discovery of the neutron by physicist James Chadwick. Leó Szilárd's patent did not include the idea of nuclear fission as a neutron source as the process had yet to be discovered. The discovery of the nuclear chain reaction came from Lise Meitner, Fritz Strassmann and Otto Hahn in 1938 after they bombarded a core of uranium with neutrons and subsequent studies into their method.

The discovery of fission led to Leó Szilárd's letter to Franklin D. Roosevelt in 1939 on the danger of uranium fission leading to the development of a new type of bomb. This led to increased interest and study of the process of nuclear fission, including the Frisch-Peierls memorandum on the amount of uranium needed for a chain reaction. The Frish-Peierls memorandum was part of the MAUD Committee in the United Kingdom, as part of their atomic bomb project, known by the code name Tube Alloys. 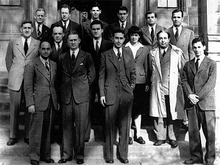 Part of the Chicago Pile Team, including Enrico Fermi and Leó Szilárd

In 1942, a team at the University of Chicago lead by Enrico Fermi constructed the Chicago Pile-1, the first artificial nuclear reactor. The Chicago Pile-1 achieved criticality in December 1942. In 1943, the United States Military developed a number of nuclear reactors as part of the Manhattan Project and for their need of plutonium for nuclear weapons. Fermi and Szilárd filed for the patent on nuclear reactors in 1944, but the issuance was delayed due to wartime secrecy.