Maria Sharapova was born on 19 April 1987, in Nyagan, Russian SFSR, Soviet Union. Her parents, Yuri Sharapov and Yelena, are from Gomel, Byelorussian SSR. Concerned about the regional effects of the 1986 Chernobyl nuclear accident, they left their homeland shortly before Maria was born.

In 1990, when Sharapova was three, the family moved to Sochi, Krasnodar Krai, Russia. She hit her first tennis ball when she was 4 years old. Her father, Yuri, befriended Aleksandr Kafelnikov, whose son Yevgeny would go on to win two Grand Slam singles titles and become Russia's first world No. 1 ranked tennis player. Aleksandr gave Sharapova her first tennis racquet in 1991 when she was four, whereupon she began practicing regularly with her father at a local park. Maria took her first tennis lessons with veteran Russian coach Yuri Yutkin, who was instantly impressed when he saw her play, noting her "exceptional hand-eye coordination"

From 2003, Sharapova played a full season and made a rapid climb into the top 50 by the end of the year. She made her debuts at both the Australian Open and the French Open, but failed to win a match in either. Then, as a wildcard at Wimbledon, she defeated 11th seed Jelena Dokić, her first win over a top-20 player, to reach the fourth round, where she lost in three sets to Svetlana Kuznetsova. By the end of September, Sharapova had already captured her first WTA title at a smaller event, the Japan Open Tennis Championships, before winning her second in her final tournament of the season, the Bell Challenge in Quebec City. To cap off her first full season as a professional, she was awarded the WTA Newcomer of the Year honor.

2004: Wimbledon glory and rise to fame

During the spring clay-court season, Sharapova entered the top 20 on the WTA world rankings as a result of reaching the third round of the Qatar Telecom German Open and the Internazionali BNL d'Italia, both of which were Tier I events. At the latter event, she defeated a player ranked in the top 10 for the first time with a straight-sets win over world No. 10 and 2004 French Open finalist Elena Dementieva. Later that clay-court season, she went on to make the quarterfinals of a Grand Slam for the first time at the French Open, losing there to Paola Suarez 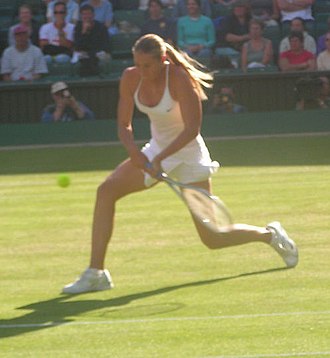 Sharapova at Wimbledon in 2004

Maria Sharapova was born in Nyagan.

A mansion in Los Angeles, a $8.6 million ranch and a millionaire boyfriend: how Maria Sharapova lives

Maria Sharapova Retires! Her Best Moments at the US Open

Title
Author
Date
Publisher
Description
Maria Sharapova wants to be clear: She is retiring, not quitting
Christopher Clarey | NYT
February 28, 2020
@bsindia
A 6-foot-2 Russian who punctuated her flat groundstrokes with piercing shrieks, Sharapova made one of the most extraordinary journeys in sports
Wednesday evening news briefing: Coronavirus fears postpones Six Nations match
Chris Price
February 26, 2020
The Telegraph
Your evening guide: Ireland v Italy clash in Dublin put back as virus spreads and Sajid Javid's parting shot at Dominic Cummings
Goodbye, Tennis: 5-time Grand Slam winner Maria Sharapova retires at 32
AFP | PTI
February 26, 2020
@bsindia
She shot to fame as a giggly 17-year-old Wimbledon winner in 2004, the third-youngest player to conquer the All England Clubs hallowed grass courts
Tennis star Maria Sharapova announces retirement - Times of India
February 26, 2020
The Times of India
Tennis News: Five-time Grand Slam winner Maria Sharapova, one of the world's most recognisable sportswomen, on Wednesday announced her retirement from tennis. Shar
Future uncertain for Maria Sharapova after early Australian Open exit
January 21, 2020
Hindustan Times
In the main draw on a wild card with a world ranking of 145, the 32-year-old Russian put up a dogged mid-match fight on Rod Laver Arena before crumpling to a 6-3 6-4 defeat at the hands of Donna Vekic.