Famous As: 35th President of the United States

Who was John F. Kennedy?

A quote by Kennedy, ‘Do not pray for easy lives. Pray to be stronger men’, perfectly summarizes his philosophy of life. A man with a futuristic vision, John Fitzgerald Kennedy served as the 35th President of the United States. Born in an elite, politically involved Catholic family of Boston, Kennedy was elected as President at the age of 43. Before taking up the office of the President, Kennedy served in the U.S. House of Representatives and the US Senate. He defeated Vice President and Republican candidate Richard Nixon to become the President of the United States. He was the youngest President elected and the first Roman Catholic to hold the prestigious office. Kennedy is known to have played an influential role in revolutionizing American politics. Though the initial days of his presidency brought out a negative image of the Kennedy-ruled White House, due to the Bay of Pigs fiasco and inimical Cold War, it was due to his skilful statesmanship and confident approach that he earned the title of a compelling, charismatic leader. 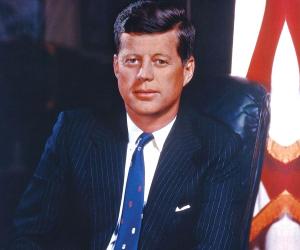 In 1945, he took up the job of a special correspondent for the Hearst Newspaper. The job not only exposed him to journalism as a possible career option, but also brought him in public domain.

Meanwhile, the death of his elder brother, Joseph Kennedy Jr cast a shadow of disappointment in the Kennedy family, especially to his father who envisioned his son to take up the chair of the US President. Kennedy took it upon himself to fulfil the hopes and aspirations of his family and became the family’s political leader.

In 1946, Kennedy filled up for the position of James Michael Curley at the US House of Representatives, beating the Republican candidate by a large difference - his war hero status and a wealthy background aiding him in the process.

Kennedy served as a congressman for six years. However, he was frustrated with the job. The reason for the same was that unlike the profiles he previously held, the work was dull and boring and stifled young, inexperienced representatives like him with rules and procedures.

As such, in an effort to look for much more influential work and make ‘real’ contribution, Kennedy contested for the US Senate seat. The votes for Kennedy outnumbered those for his republican opponent, Henry Cabot Lodge, Jr thus helping Kennedy rise to a better position and larger platform.

Filling up the seat of the Senate did not come in easy for Kennedy as he suffered from major health problems. He was critically ill for most of the times, which explained his absence from the Senate.

It was during this time that Kennedy came up with the book, ‘Profile of Courage’, which gives a detailed account of eight Senators who had taken unpopular stances, despite the fact that it risked their careers. The book was much appreciated and earned him a Pulitzer Prize.

Meanwhile, the profile of the Senate also failed to please Kennedy who was bored solving Massachusetts-specific issues and was interested in the bigger picture. He wanted to be a part of the international challenges and solve country-related problems and not state-related ones.

In 1956, Kennedy contested the Vice Presidential election, but lost the same to Senator Estes Kefauver of Tennessee. The failure did not de-motivate Kennedy who believed that the occasion provided him with national exposure.

Two years later, Kennedy was re-elected to the Senate, defeating Republican opponent Vincent J Celeste to serve his second term. Following this, Kennedy decided to run for the presidency.

In the 1960 Democratic primary election, Kennedy initiated his campaign for the Presidential election. He outclassed Senators Hubert Humphrey and Wayne Morse to face Senator Lyndon B. Johnson at the Los Angeles convention. Defeating the latter too, Kennedy was nominated by the Democratic convention as its candidate. He chose Johnson as his Vice Presidential candidate.

Kennedy faced Republican candidate Richard Nixon, the then Vice President, in the general elections. He participated in the first televised U.S. presidential debate in the U.S. history. While he appeared relaxed and confident, Nixon was tensed and uncomfortable due to which people voted for Kennedy and favoured him as the winner.

On November 8, 1960, Kennedy became the 35th President of the United States, defeating Nixon by a razor-thin margin. His appointment was historic as he became the second youngest American president, the first Catholic president and the first president born in the 20th century.

Who was John F. Kennedy? Everything You Need to Know