Refers to the collection and use of information from naval, joint, and national sensor systems in order to find, fix, and track both friendly and hostile forces and is a component of command, control, communications, intelligence, surveillance and reconnaissance (C4ISR) systems.

an integrated operations and intelligence activity that synchronizes and integrates the planning and operation of sensors, assets, and processing, exploitation, and dissemination systems in direct support of current and future operations.

ISR systems are at the intersection between military planning, operations, and assessment where intelligence is the product of surveillance and reconnaissance operations.

Is defined as the product resulting from the collection, processing, integration, evaluation, analysis, and interpretation of available information concerning foreign nations, hostile or potentially hostile forces or elements, or areas of actual or potential operations.

Is defined as a mission undertaken to obtain, by visual observation or other methods, information about the activities and resources of an enemy or adversary, or to secure data concerning the meteorological, hydrographic, or geographic characteristics of a particular area.

Is defined as the systemic observation of aerospace, cyberspace, surface, or subsurface areas, places, persons, or things by visual, aural, electronic, photographic, or other means.

In ISR systems, which use a wide-array of platforms, sensors, and analytic capacity to create awareness, the principle function is to find, fix , and track both friendly and hostile forces. This includes assessing damage to hostile targets in an area of interest. In addition to ISR systems sensing as a collection, their function includes tasking sensors with the integration, interpretation, and exploitation of sensed information, either by way of analysts or operators or machine learning systems. Strike group ISR capabilities are provided by naval, joint, and national sensor systems which, in turn, can be space-based, airborne, on-the-surface, and subsurface. 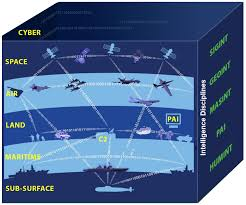 Example of the joint layers of ISR systems.

According to joint military doctrine, the primary role of intelligence is to provide information and assessments to facilitate mission accomplishment. For instance, targeting an adversary's long-range missiles is easier when military commanders know where the missiles are. ISR works to inform these commanders to enable decision making. These systems and operators work to support military planning by anticipating adversary actions and defining the operational environment. ISR roles also includes warning friendly forces of threats, supporting deceptive techniques and counter adversary deception, identify adversary vulnerabilities, hold targets at risk of being attacked, and assess combat effectiveness.

These roles and responsibilities are accomplished through a detailed joint intelligence process that facilitates an understanding of the wide variety of intelligence operations and their interrelationships. 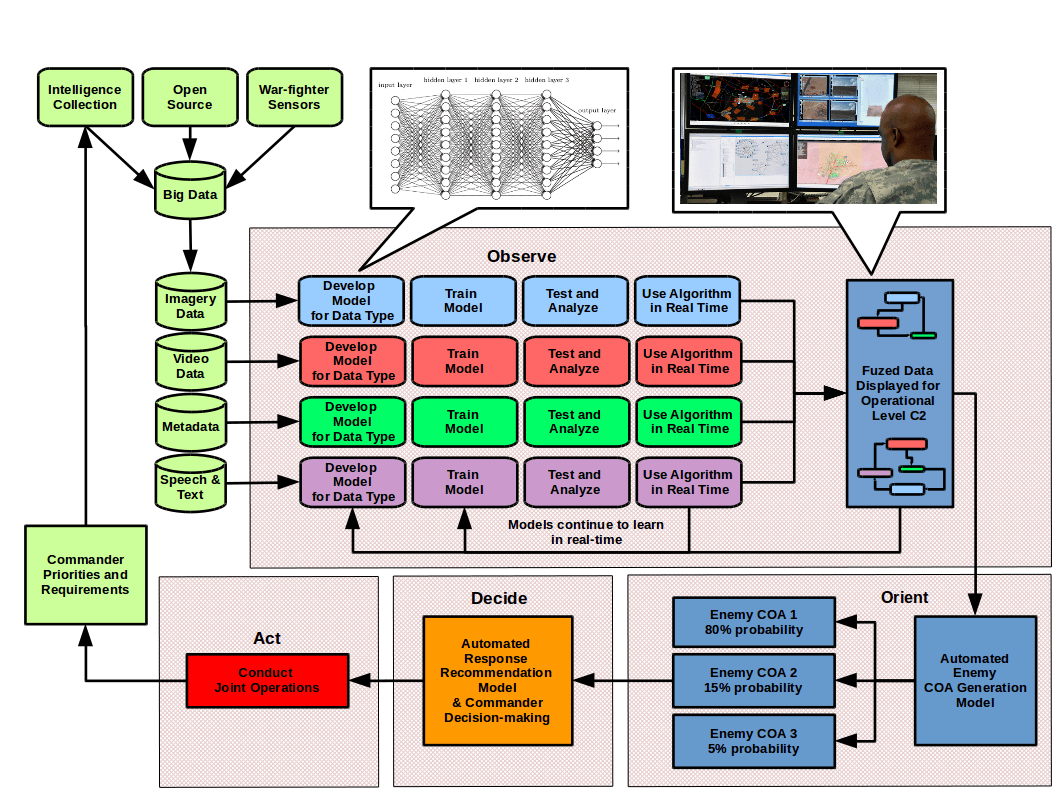 Developing ISR systems, also known as a sensing grid, plan to use artificial intelligence (AI) and machine learning (ML) to autonomously consolidate all-source information into a single operational picture, further exploiting big data in order to increase situational awareness. The all-source, fused picture is then used in conjunction with a command grid, a sophisticated AI to rapidly generate enemy courses of action for commanders to analyze, with further proposed capabilities including recommending courses of action and responses. This would further allow AI to sift through the large amounts of data collected by current ISR systems (let alone the data collected by proposed ISR grid systems). The current data rate challenges the limited number of analysts and can hinder the ability of timely responses to threats.

If realized, the strategy will see a sensing grid which enables a C2 system to observe, orient, and decide and act (OODA) at machine speeds, improving the chances of gaining a decisive advantage over an enemy.

The development of smart software, by Raytheon, called Cognitive Aids to Sensor Processing, Exploitation and Response (CASPER) is intended to further lighten an operator's workload through automation tools. These aids are intended for integration into products like Multi-Spectral Targeting Systems, which provide visible and infrared intelligence and targeting information for an array of airborne platforms. The CASPER system would allow operators to focus on decision making rather than data processing, and, in turn, allow for a faster threat response.

The use of AI within C2 and ISR systems also introduces weaknesses, which include being susceptible to deception or surprise (similar to a human analyst or decision maker), a lack of contextual understanding behind an ISR picture (at least until a "general intelligence" is achieved in AI), and, due to the use of datasets for patterns, a system will have to be specifically trained for the detection of important anomalies from adversary military systems. The datasets are also important, as AI would rely on these training sets for its prediction and probabilities, which means an adversary can develop capabilities for targeting specific AI vulnerabilities. These can include understanding and manipulating the algorithmic design or training data of an ISR AI.

An IMINT system provides photographic coverage over denied territory that, through stereo photogrammetry, enables precise geodetic positioning of targets on the ground. These capabilities have provided the means for precision strikes against fixed targets. And, as the speed of tasking, collection, and processing has increased, the same capabilities have put relocatable targets at risk. Satellite constellations under the Future Imagery Architecture program of the National Reconnaissance Office offer greater imaging capabilities.

These systems have global coverage and provide geodetic positioning of platforms emitting at radio frequencies. Their product is quickly and widely broadcast to tactical forces afloat and in the field, where it is used for strike targeting and defense avoidance and suppression, among other purposes.

In the case of the United States Air Force, ISR has been a part of the divisions remit since its establishment as a separate military service. Since 2001, the U.S. Air Force has continued to support overseas contingency operations and fielded a massive theater ISR enterprise. The most visible part of the U.S. Air Force's ISR force is the over 425 manned and unmanned aircraft of 14 different types. 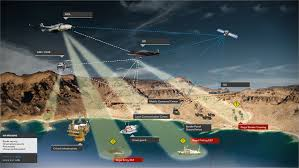 The four unmanned aerial vehicles (the MQ-1B Predator, MQ-9 Reaper, RQ-4 Global Hawk, and RQ-170 Sentinel) are newer aircraft and total over 280 aircraft. The remaining types of manned aircraft date to the 1960s and 1970s These are the so-called Iron Triad of big-wing, manned ISR platforms (which include the E-3 Sentry, E-8 Joint Stars, and various OC/RC/WC-135s, totaling about 80 aircraft) which use airframes first developed in the 1950s. These aircraft are approaching their flight hour limits.

Released on August 2, 2018 by Lt. Gen. "Dash" Jamieson, the Air Force Deputy Chief of Staff for ISR, the U.S. Air Force's Next Generation ISR Dominance Flight Plan outlines the intention to retool and increase both the quality and quantity of ISR production while simultaneously using fewer airmen. This suggests the plan depends upon the maturation of machine intelligence technology which would be provided through agile capability deployment. The further development of a collaborative sensing grid would include stand-off and penetrating, manned and unmanned airborne ISR platforms (with collaboration from space-based and cyberspace-based collection capabilities). And the proposal uses Publicly Available Information to build a foundation for information collected by classified ISR capabilities. And the plan further details the replacement of the manpower used to process, exploit and disseminate intelligence with machine intelligence systems in order for the U.S. Air Force to do more with less. 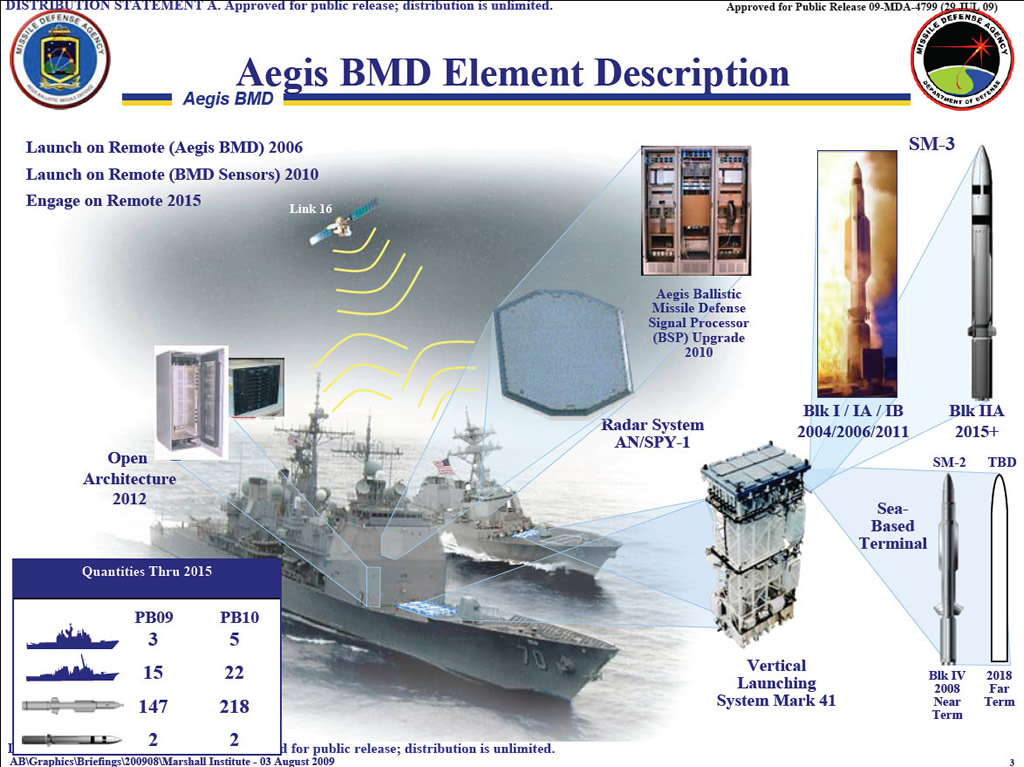 The distinction between C4ISR and combat systems continue to blur with the advent of network-centric operations. Sensors onboard Navy surface ships are integral parts of combat systems, but with the data shared through other sensor systems and further data, a surface ship can have a more complete picture for the commander's situational awareness and increase the surface ship's combat capabilities. As part of this, new air defense radars have been developed as part of a multi-mission destroyer program planned to provide horizon and volume search through a dual-band (L and X) capability.

Further, the capability for a navy to deny or degrade an adversary's ability to find and target ships through the capability to suppress an adversary's ISR, either through physical destruction, deception, disruption, and corruption, will offer a critical edge: situational awareness and a reduced threat of attack. This has increased the development of offensive capabilities for Suppression of Enemy Intelligence, Surveillance, and Reconnaissance (SEISR). This is a similar system to the suppression of enemy air defenses (SEAD) which, through recognition of the increasing lethality of air defenses, works to suppress air operations of an adversary.

The Chairman of the Joint Chiefs of Staff Joint Publication, Cyberspace Operations, works to define cyberspace ISR as:

This definition captures the majority of the operations of Cyberspace ISR. However, these operations work to exploit, attack, and defend. They exploit cyberspace in order to collect intelligence about adversaries from the information that transits and is stored on their digital networks. It works to enable cyberspace attacks on adversary computer networks and work to defend their networks. These activities are supported by cyberspace intelligence preparation of the operating environment (C-IPOE) which provides an understanding of the cyber battlespace.

This works to break cyberspace into five layers: the identity, cyber-persona, logical, physical, and geographical layers. Information in any one of these layers can provide a linkage to enable further mapping of other layers.

This is similar to human intelligence collection in which an agent may listen in on a conversation, which is more complicated but possible to do in cyberspace. While this collection can be relatively easy depending on the encryption and security levels of messages, but is often used as part of an active cyberspace collection, such as computer network exploitation (CNE) which offers a door through which a user can listen if undetected.

Dominating the Anti-Ship Missile Threat Through Suppression of Enemy ISR