Who is Gal Gadot?

Gal Gadot is a famous Israeli actress and model, best known for her character of Gisele Yashar in the ‘Fast & Furious’ film series. Listed at number 5 on the Shalom Life’s 50 most talented, intelligent, funny, and gorgeous Jewish women in the world, she is an iconic figure to be reckoned with in the Jewish world of entertainment. She started off her career as a model and went on to become the country’s leading model, winning the prestigious Miss Israeli pageant as well. She also represented the country at the Miss Universe crown. Following her super successful stint as a model, she tried her hand at acting. Gadot’s killer looks, never-say-die military spirit and artistic determination to excel helped her become a top-rated actress. She soon found roles in prestigious Hollywood projects. She was a part of ‘Fast & Furious’ film series and portrayed the role of a superwoman in the movie ‘Batman vs Superman: Dawn of the Justice’. 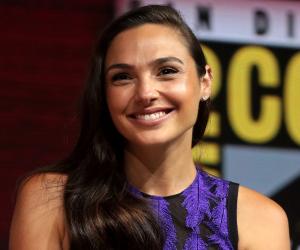 At the age of 18, Gadot competed in the 2004 Miss Israeli pageant. She won the coveted title and represented Israel at the prestigious Miss Universe crown held in Ecuador.

She served her mandatory two years of service in the Israeli Defence Forces from the age of 20. Military training brought a lot of self-discipline in her life which she states became a valuable lesson in her future career pathway.

Following her military service, Gadot studied law. It was after her first year in law school that a casting director, Justin Lin, spotted her. He called her to audition for the role of Camille Montes, the Bond girl in ‘Quantum of Solace’; but she lost it to Olga Kurylenko.

Knowing the potential that Gadot had and not willing to lose her, Lin offered her the role of Gisele in the fourth instalment of the ‘Fast & Furious’ franchise. During the same time, she made her television debut in the Israel drama ‘Bubot’.

In 2010, Gal Gadot played a minor role in the action adventure flick ‘Knight and Day’. Prior to this, she played Natanya, the girlfriend of Mark Wahlberg's character in the film ‘Date Night’.

Gadot reprised her role as Gisele in the fifth and sixth instalments of the ‘Fast & Furious' series.

In 2016, she bagged the role of Wonder Woman for the film ‘Batman vs Superman: Dawn of Justice’. Such impressive was her ‘superhero’ performance that her character became known as the best role in the film. Despite it being her debut performance as a superhero, Gadot nailed it to perfection.

Following the stupendous success of ‘Batman vs Superman’, she signed two sequels including ‘Justice League’ and a solo ‘Wonder Woman’, both of which are expected to release in 2017. For the role, she has trained in swordsmanship, Kung Fu kickboxing, capoeira and Brazilian jiu-jitsu.

Apart from her superhero series, Gadot picked up small roles in 2016, including John Hillcoat’s crime-thriller ‘Triple 9’. In the movie, she shared screen space with the very talented, Kate Winslet, and Aaron Paul. She also co-starred in the thriller film ‘Criminal’ as the wife of Ryan Reynolds' character and in the comedy ‘Keeping Up with the Joneses’, wherein she capped the role of a secret agent, alongside Isla Fisher and Jon Hamm.

Apart from being an actress, Gadot is also an active model. She took part in the Maxim photo shoot ‘Women of the Israeli Army’ and was featured on the cover of the New York post. She has led various international ad campaigns including Captain Morgan rum, Gucci fragrances, Vine Vera skincare ranges, Jaguar Cars and so on. She has been the face of Gucci's Bamboo perfume brand, Huawei smartphones, and of Miss Sixty.

From 2008 to 2016, Gadot served as the main model for the fashion brand ‘Castro’. During this time, she featured as the cover girl of various popular magazines, such as Cosmopolitan, Glamour, Bride Magazine, Entertainment Weekly, UMM, Cleo, Fashion, Lucire and FHM.

She is famous for portraying Wonder Woman in the DC Extended Universe, starting with Batman v Superman: Dawn of Justice, then the solo film Wonder Woman and latest film Justice League
(to 2015) Acting. The casting director from her Quantum of Solace audition cast Gadot for the role of Gisele Yashar in the action film Fast & Furious, the fourth film in The Fast & the Furious franchise, having earned the role over six other actresses.
(to 2016) Modeling. She has featured as the covergirl on Cosmopolitan, Glamour, Bride Magazine, Entertainment Weekly, UMM, Cleo, Fashion, Lucire, FHM
Personal Life. Gadot married Israeli real estate developer Yaron Versano on September 28, 2008. They have two daughters, Alma and Maya
(to 2006) Military Service. She carried out her two-years military service from the age of 20, then studied law
Miss Universe. When she was 18 years old. She was crowned Miss Universe Israel 2004
Gal Gadot was born in State of Israel.

!! Gal Gadot In The Best Sence Of All Fast & Furious Movies

25 Facts That Will Make You Love Gal Gadot Even More