Explainable AI (XAI) refers to the set of technologies and practices required to make the outputs of an AI model understandable and interpretable by human experts.

Explainable AI (XAI) refers to the set of technologies and practices required to make the outputs of an AI model understandable and interpretable by human experts. 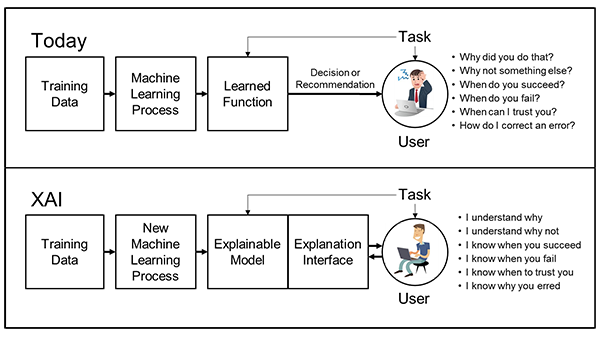 Artificial Intelligence is sometimes characterized as a black box system because it can be difficult to determine how a particular output or behavior resulted from a given set of inputs.

This presents a number of challenges for AI researchers and engineers in academia and in the private sector:

Risks imposed by mysterious, unexplainable behavior in AI models prompted AI and machine learning researchers to seek out ways to produce more explainable models and build artificial intelligence systems which can be understood and appropriately trusted.

There are several approaches to the challenge of "opening the black box," including:

There are many research efforts into explainable AI by academic institutions, the private sector, and governments. DARPA—the research and development arm of the U.S. military—launched its Explainable Artificial Intelligence program in August 2016.

In its announcement, DARPA said that "The goal of Explainable Artificial Intelligence (XAI) is to create a suite of new or modified machine learning techniques that produce explainable models that, when combined with effective explanation techniques, enable end users to understand, appropriately trust, and effectively manage the emerging generation of Artificial Intelligence (AI) systems."

A Survey on Explainable Artificial Intelligence (XAI): Towards Medical XAI

Explanation in Human-AI Systems: A Literature Meta-Review, Synopsis of Key Ideas and Publications, and Bibliography for Explainable AI

Explainable AI for Science and Medicine

The Problem with Black Boxes with Cynthia Rudin - Talk #290