Eminem is an American rapper, record producer, songwriter, and actor. He is considered as one of the greatest and most influential artists of all time. The 'Rolling Stone' magazine has labeled him the 'King of Hip Hop,' and listed him in its list of the '100 Greatest Artists of All Time.' He became passionate about rapping at a young age of fourteen, and began attending local open-mic competitions with friends. As he grew up, he formed a group of rappers called 'D12,' which became quite popular among local music lovers. Soon, he caught the attention of famous record producer Dr. Dre, and with Dre's assistance, he released successful albums like 'The Slim Shady LP,' and 'The Marshall Mathers LP.' His albums have all been roaring hits, making him one of the biggest sensations in the rap industry. Most of his songs are based on his personal struggles with his family members and his career. This is considered by many as the USP of his albums, making them close to his fans' hearts. He has often run into trouble with the law. He is known for his explicit use of words, often sending out aggressive signals. Yet, this famous rap artiste has managed to win the hearts of critics and followers alike, bagging more than a dozen 'Grammy Awards.' 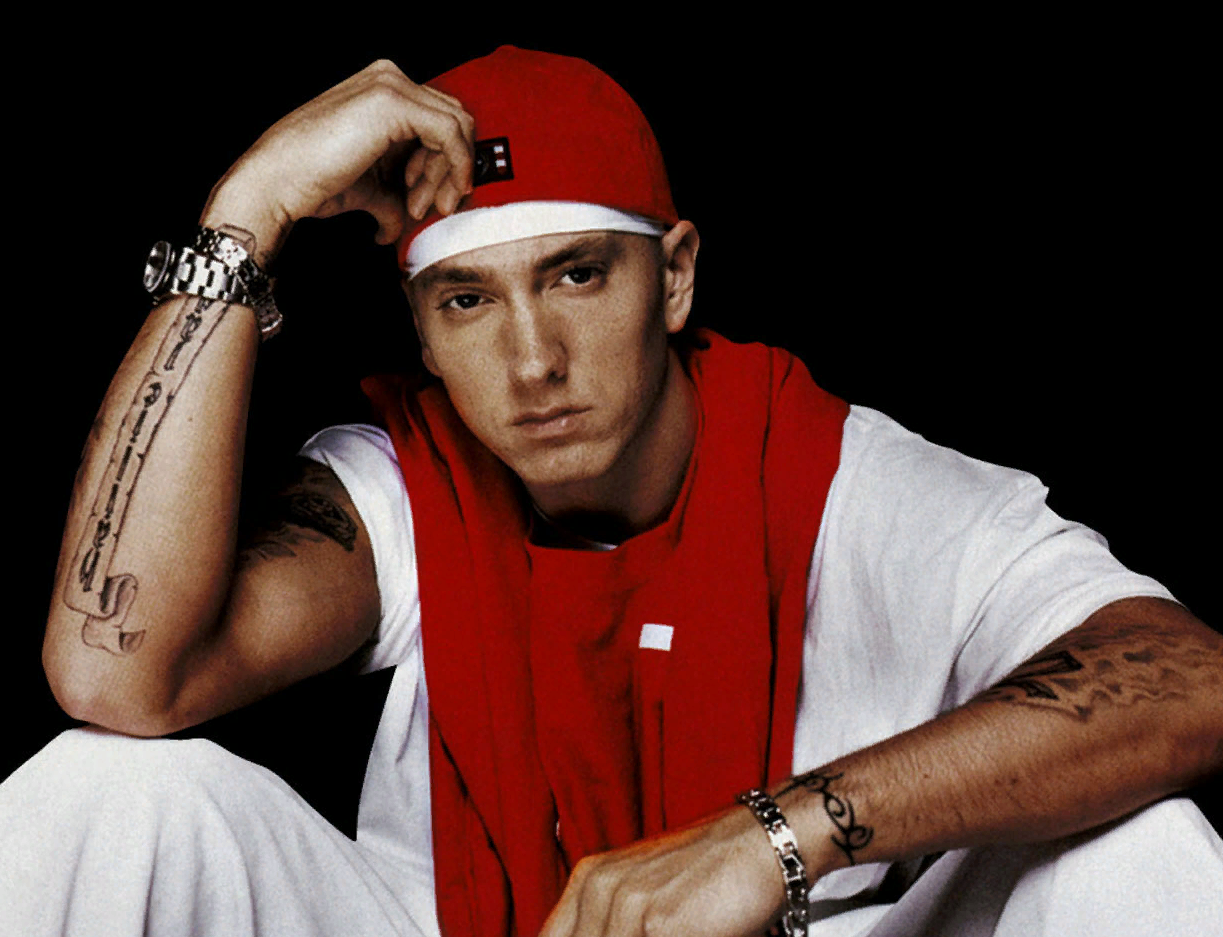 Eminem, byname of Marshall Bruce Mathers III, (born October 17, 1972, St. Joseph, Missouri, U.S.), the only child of Marshall Bruce Mathers Jr. and Deborah Rae "Debbie" (née Nelson). He is of English, Scottish, German, German Swiss, Polish and Luxembourgian ancestry. Eminem's parents were in a band called Daddy Warbucks, playing in Ramada Inns along the Dakotas–Montana border before they separated. Eminem's father, Bruce Jr., left the family, moving to California after having two other children: Michael and Sarah. His mother, Debbie, later had a son named Nathan "Nate" Kane Samara.uring his childhood, Eminem and his mother shuttled between Detroit and Missouri, rarely staying in one house for more than a year or two and living primarily with family members. In Missouri, they lived in several places, including St. Joseph, Savannah and Kansas City.

Mathers had a turbulent childhood, marked by poverty and allegations of abuse. When he was a child, a bully named D'Angelo Bailey severely injured Eminem's head in an assault, an incident which Eminem later recounted (with comic exaggeration) on the song "Brain Damage". Debbie filed a lawsuit against the public school for this in 1982. The suit was dismissed the following year by the Macomb County, Michigan judge, who said the schools were immune from lawsuits. Eminem and his mother lived for much of his youth in a working-class, primarily black, Detroit neighborhood. He and Debbie were one of three white households on their block, and Eminem was beaten several times by black youths. At age 14 he began rapping in clubs in Detroit, Michigan, and, when unexcused absences kept him in the ninth grade for the third year, he quit school, determined to make it in hip-hop music. As Eminem, he made a name for himself in the hip-hop underground, both as a solo artist and as a member of the Detroit-based rap sextet D12 (also known as the Dirty Dozen). His first album, Infinite (1996), sold poorly, however, and he continued to work menial jobs.

When Eminem placed second in the freestyle category at the 1997 Rap Olympics in Los Angeles, he came to the attention of Dr. Dre, founding member of pioneering rappers N.W.A. and the head of Aftermath Entertainment. By that time Eminem had developed the persona of the inhibitionless Slim Shady, who gave voice to Eminem’s id in often vulgar and violent lyrics. With Dr. Dre as his producer and mentor, Eminem released The Slim Shady LP early in 1999. Benefiting from the inventive channel-surfing music video for the hit song “My Name Is” and the instant credibility of Dr. Dre’s involvement, the album sold several million copies, and Eminem won two Grammy Awards and four MTV Video Music Awards.

In downtown Detroit, Eminem opens the restaurant Mom's Spaghetti, named after a line in his song "Lose Yourself." The first fans in line are served by Slim Shady himself.
Eminem is questioned by the Secret Service about lyrics in his song "Framed," where he imagines Ivanka Trump murdered in the trunk of his car. Agents determine he is not a threat; Eminem later raps about it on his song "The Ringer": "Agent Orange just sent the Secret Service to meet in person."
Thanks to the song by Eminem, the word "stan" is added to the Oxford American Dictionary, defined as "an overzealous or obsessive fan of a particular celebrity."
Eminem gets his own radio channel on Sirius satellite radio. He launches the Shade 45 channel with a gathering called the Shady National Convention, which also promotes his album Encore.
Eminem hits #1 on the Hot 100 for the first time when "Lose Yourself," from his movie 8 Mile, tops the chart.
8 Mile, a semi-biographical look at Eminem's early days as a struggling rapper in Detroit, opens in theaters. The film is a critical and commercial success, and Eminem's "Lose Yourself" becomes the first rap song to win the Oscar for Best Original Song.
Eminem's The Eminem Show hits #1 on both the UK and US album charts.
Eminem, still without an American chart-topper, lands his third UK #1 hit with "Without Me," where he takes shots at a number of soft targets including Chris Kirkpatrick, Limp Bizkit and Moby.
At the 75th Academy Awards, Eminem becomes the first rapper to take home an Oscar when "Lose Yourself," from his semi-biographical film 8 Mile, wins Best Original Song. Eminem doesn't bother to attend the ceremony, thinking he has no chance of winning, so his friend and producer Luis Resto accepts the honor in his absence.
After months of wrangling over child support, rapper Eminem's divorce becomes official.

Dr. Dre "I Need a Doctor" (Behind The Scenes)

Eminem - Making of Cleaning Out My Closet

Title
Author
Date
Publisher
Description
Eminem's 'Lose Yourself' but as a 1940's race caller
December 18, 2020
Geekologie
This is vocalist Elise Roth doing a rendition of Eminem's
Eminem appears to diss Mark Zuckerberg in hilarious, A.I.-generated deepfake
Luke Dormehl
November 24, 2020
Digital Trends
Eminem takes aim at Facebook's CEO and co-founder in an unusual new diss track. At least, that's how it appears on the surface.
50 Cent's "In Da Club" Reaches 1 Billion Views on YouTube
Universal Music Enterprises
November 16, 2020
www.prnewswire.com:443
/PRNewswire/ -- Today, 50 Cent's debut single "In Da Club" from Get Rich or Die Tryin' (Shady/G-Unit/Aftermath/Interscope/UMe) is now officially part of...
Oh, Internet: The Princess Bride's Inigo Montoya Edited To Perform Eminem's 'My Name Is'
February 12, 2020
Geekologie
Because the internet, like a clothes dryer set on auto-detect with a broken sensor, never stops spinning, this is a series of clips from The Princess Bride edited together by Ariel Avissar so Inigo Montoya and a few of...
Oscars 2020: Martin Scorsese Dozing As Eminem Raps Is Going Viral
February 10, 2020
NDTV.com
Oscars 2020: Eminem, like Marvel films, is clearly not cinema
SHOW MORE