Who is Elton John?

In the world of rock and pop music, if there is one name that resonates magic it has to be that of Sir Elton John. An English singer, pianist, and composer, Elton John continues to weave magic in his compositions and lyrics backing them up with his soulful renditions. His five decades of career has been historic and record-breaking quite literally. With over 300 million records sold, he is one of the best-selling music artists in the world. He has some quite unattainable feats under his belt—seven consecutive No. 1 US albums, 58 Billboard Top 40 singles, 27 Top 10, four No. 2 and nine No. 1 songs. For 31 consecutive years, i.e. from 1970 until 2000, he had at least one song in the Billboard Hot 100. He has to his credit more than fifty Top 40 hits and that is not all. His tribute to Princess Diana, ‘Candle in the Wind 1997’, sold over 33 million copies worldwide and is the best-selling single in the history of the UK and US singles charts even today. And if you think that is all that Elton John has for you, wait. Apart from being a noteworthy English singer and pianist, he is also a well renowned composer, produce and even actor. 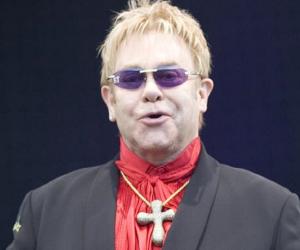 Elton John’s first job was as a weekend pianist at a pub. Thereafter, he took up several roles, forming a band with friends, working in a music publishing house, performing solo at hotels. In 1962, he formed the band Bluesology.

In 1967, he collaborated with lyricist Bernie Taupin. He wrote musical compositions for the latter’s lyrics. This led to the beginning of the historic partnership that still survives today. ‘Scarecrow’ was the first song recorded by the two. Meanwhile, Dwight changed his name to Elton John after Bluesology musicians.

In 1968, Elton John and Taupin became successful staff songwriters for DJM Records. They were writing and composing song for other singers and musicians. Starting off with easy lyrics and catchy music, they switched to more complex forms.

In 1969, Elton John received his first break as a singer and came up with his debut album ‘Empty Sky’. He soon backed it with a follow-up album, ‘Elton John’ that was released in April 1970. The album soon became his first hit album, reaching number four on the US Billboard 200 and number five on the UK Albums Chart.

The tremendous success of Elton John’s second album gave him impetus to continue making music. Consequently, in 1972, he released ‘Honky Château’, which went on to become his first US number one album. This was just the beginning as what followed was a streak of seven consecutive US number one albums.

His first song to reach the US Billboard Hot 100 number one position was ‘Crocodile Rock’ from the pop album ‘Don't Shoot Me I'm Only the Piano Player’. His 1973 album ‘Goodbye Yellow Brick Road’ gained a cult status as it was an instant hit both critically and popularly. The album established his reputation as a glam rock star.

Having gained a star status, he formed his own label, The Rocket Record Company. However, instead of releasing his own records on Rocket, he signed an offer with MCA.

In 1974, MCA released his Greatest Hits album, a UK and US number one, which was certified Diamond by the RIAA. This was followed by 1974 ‘Caribou’ and the 1975 autobiographical album ‘Captain Fantastic and the Brown Dirt Cowboy’. It debuted at number one in the US, becoming the first album ever to do so. Its success was soon repeated by the rock-oriented album, ‘Rock of the Westies’.

Though early 1970s was the most successful period for John, both commercially and critically, given his seven consecutive albums reached number one spot in the US, John became equally famous for his live shows and his dressing sense. He was known for wearing pompous, over-the-top costumes and glasses for his elaborate concerts.

In 1976, John touched the top yet again with the duet single ‘Don’t Go Breaking My Heart’ with Kiki Dee. He took a hiatus from the music industry only to return in 1978 with the album ‘A Single Man’. Following year, he became the one of the first Western artists to tour in Soviet Union and Israel.

The decade of 1980s was a decent period in John’s career. Though he had lost his Midas touch in music, thanks to his drinking and drug problems, all was not gone. He produced several smash hits during this time including ‘Little Jeannie’ ‘Empty Garden (Hey Hey Thanks)’, ‘I’m Still Standing’, ‘I Guess That’s Why They Call It The Blues’ and ‘That’s What Friends Are For’ which reached No 1 spot in US. He performed several live shows during this time.

He opened the decade of 1990 in style with his first single ‘Sacrifice’ hitting the number one spot in UK charts. It became his first solo UK hit single. Following a series of hit singles and albums, he tried his hand at other fields.

Together with Tim Rice, he wrote the songs for the 1994 Disney animated film ‘The Lion King’. The score was immensely lauded and even went on to win him his first Academy Award for ‘Can You Feel the Love Tonight’.

In 2003, Elton John scored his fifth UK number one single with ‘Are You Ready for Love’. Returning to musical theatre, he composed music for a West End production of Billy Elliot the Musical in 2005 with playwright Lee Hall. Opening to strong reviews, the show became eleventh longest-running musical in West End history. It has won 80 international awards and has been viewed by over 5.25 million people in London and nearly 11 million people worldwide.

The decade of 2010s has seen Elton John perform for a variety of shows. He has his hands full with concert shows, live performances, remix albums, performances at award ceremonies and so on.

In 2016, he came up with his 32nd studio album ‘Wonderful Crazy’ which was also his last one.

The Single ‘Merry Christmas’ written and recorded with Ed Sheeran, was released. It reached number 1 in the UK.
With most of the world homebound as the coronavirus pandemic takes hold, Elton John hosts the "Living Room Concert For America" from his home, featuring virtual performances by Mariah Carey, H.E.R., Backstreet Boys, and Tim McGraw. The concert raises money to help local food banks and support first responders during the crisis.
Elton John announces his retirement from touring, ending with a three-year Farewell Yellow Brick Road Tour.
With gay marriage now legal in England, Elton John marries David Furnish, exactly nine years after they were joined in a civil ceremony.
Elton John and his partner David Furnish take part in a civil ceremony (gay marriage is not legal in England) to make their union official.
Gus Dudgeon, frequent producer of Elton John's recordings, dies in a car accident along with his wife, Sheila, at age 59. Elton dedicates his 2004 album, Peachtree Road, to the couple.
Raising money for victims of the September 11th attacks, Paul McCartney leads "The Concert For New York" in Madison Square Garden. Elton John, Billy Joel, David Bowie, The Who, and Eric Clapton all participate.
Elton John auctions off 20 vehicles in his car collection, earning $2.75 million. He says he "doesn't have time to drive them anymore."
Elton John is knighted by Queen Elizabeth II during a ceremony at Buckingham Palace
Elton John plays at the funeral for Ryan White, an 18-year-old who contracted AIDS from a blood transfusion. Michael Jackson also attends the funeral and later dedicates the song "Gone Too Soon" to White.
...