A diode is a two-terminal electronic component that conducts current primarily in one direction (asymmetric conductance); it has low (ideally zero) resistance in one direction, and high (ideally infinite) resistance in the other. A diode vacuum tube or thermionic diode is a vacuum tube with two electrodes, a heated cathode and a plate, in which electrons can flow in only one direction, from cathode to plate. A semiconductor diode, the most commonly used type today, is a crystalline piece of semiconductor material with a p–n junction connected to two electrical terminals. Semiconductor diodes were the first semiconductor electronic devices. The discovery of asymmetric electrical conduction across the contact between a crystalline mineral and a metal was made by German physicist Ferdinand Braun in 1874. Today, most diodes are made of silicon, but other semiconducting materials such as gallium arsenide and germanium are also used.

The most common function of a diode is to allow an electric current to pass in one direction (called the diode's forward direction), while blocking it in the opposite direction (the reverse direction). As such, the diode can be viewed as an electronic version of a check valve. This unidirectional behavior is called rectification, and is used to convert alternating current (ac) to direct current (dc). Forms of rectifiers, diodes can be used for such tasks as extracting modulation from radio signals in radio receivers.

However, diodes can have more complicated behavior than this simple on–off action, because of their nonlinear current-voltage characteristics. Semiconductor diodes begin conducting electricity only if a certain threshold voltage or cut-in voltage is present in the forward direction (a state in which the diode is said to be forward-biased). The voltage drop across a forward-biased diode varies only a little with the current, and is a function of temperature; this effect can be used as a temperature sensor or as a voltage reference. Also, diodes' high resistance to current flowing in the reverse direction suddenly drops to a low resistance when the reverse voltage across the diode reaches a value called the breakdown voltage.

A semiconductor diode's current–voltage characteristic can be tailored by selecting the semiconductor materials and the doping impurities introduced into the materials during manufacture.These techniques are used to create special-purpose diodes that perform many different functions. For example, diodes are used to regulate voltage (Zener diodes), to protect circuits from high voltage surges (avalanche diodes), to electronically tune radio and TV receivers (varactor diodes), to generate radio-frequency oscillations (tunnel diodes, Gunn diodes, IMPATT diodes), and to produce light (light-emitting diodes). Tunnel, Gunn and IMPATT diodes exhibit negative resistance, which is useful in microwave and switching circuits.

Diodes, both vacuum and semiconductor, can be used as shot-noise generators. 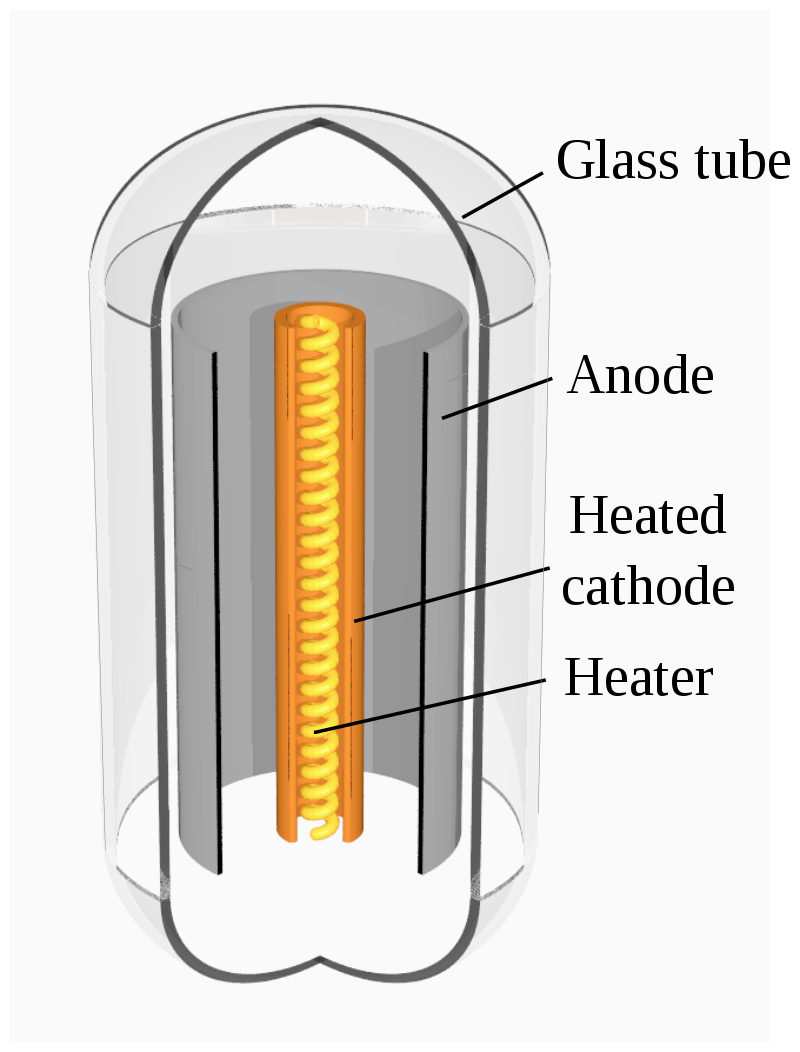 Thermionic (vacuum-tube) diodes and solid-state (semiconductor) diodes were developed separately, at approximately the same time, in the early 1900s, as radio receiver detectors. Until the 1950s, vacuum diodes were used more frequently in radios because the early point-contact semiconductor diodes were less stable. In addition, most receiving sets had vacuum tubes for amplification that could easily have the thermionic diodes included in the tube (for example the 12SQ7 double diode triode), and vacuum-tube rectifiers and gas-filled rectifiers were capable of handling some high-voltage/high-current rectification tasks better than the semiconductor diodes (such as selenium rectifiers) that were available at that time.

In 1880, Thomas Edison observed unidirectional current between heated and unheated elements in a bulb, later called Edison effect, and was granted a patent on application of the phenomenon for use in a DC voltmeter.

About 20 years later, John Ambrose Fleming (scientific adviser to the Marconi Company and former Edison employee) realized that the Edison effect could be used as a radio detector. Fleming patented the first true thermionic diode, the Fleming valve, in Britain on November 16, 1904 (followed by U.S. Patent 803,684 in November 1905).

Throughout the vacuum tube era, valve diodes were used in almost all electronics such as radios, televisions, sound systems, and instrumentation. They slowly lost market share beginning in the late 1940s due to selenium rectifier technology and then to semiconductor diodes during the 1960s. Today they are still used in a few high power applications where their ability to withstand transient voltages and their robustness gives them an advantage over semiconductor devices, and in musical instrument and audiophile applications.

In 1874, German scientist Karl Ferdinand Braun discovered the "unilateral conduction" across a contact between a metal and a mineral. Jagadish Chandra Bose was the first to use a crystal for detecting radio waves in 1894. The crystal detector was developed into a practical device for wireless telegraphy by Greenleaf Whittier Pickard, who invented a silicon crystal detector in 1903 and received a patent for it on November 20, 1906. Other experimenters tried a variety of other minerals as detectors. Semiconductor principles were unknown to the developers of these early rectifiers. During the 1930s understanding of physics advanced and in the mid 1930s researchers at Bell Telephone Laboratories recognized the potential of the crystal detector for application in microwave technology. Researchers at Bell Labs, Western Electric, MIT, Purdue and in the UK intensively developed point-contact diodes (crystal rectifiers or crystal diodes) during World War II for application in radar. After World War II, AT&T used these in their microwave towers that criss-crossed the United States, and many radar sets use them even in the 21st century. In 1946, Sylvania began offering the 1N34 crystal diode. During the early 1950s, junction diodes were developed.

At the time of their invention, asymmetrical conduction devices were known as rectifiers. In 1919, the year tetrodes were invented, William Henry Eccles coined the term diode from the Greek roots di (from δί), meaning 'two', and ode (from οδός), meaning 'path'. The word diode, however, as well as triode, tetrode, pentode, hexode, were already in use as terms of multiplex telegraphy.