An autosomal recessive disease that is characterized by the buildup of thick, sticky mucus that can damage many organs.

Breanna Glisson approved a suggestion from Golden's AI on 12 Jun, 2019
Edits made to:
Article (+13/-13 characters)
Article

According to the Cystic Fibrosis Foundation Patient Registry, in the United StatesUnited States:

Cystic fibrosis is a progressive, genetic disease that causes persistent lung infections and limits the ability to breathe over time.

In people with CF, mutations in the cystic fibrosis transmembrane conductance regulator (CFTR) gene cause the CFTR protein to become dysfunctional. When the protein is not working correctly, it’s unable to help move chloride -- a component of salt -- to the cell surface. Without the chloride to attract water to the cell surface, the mucus in various organs becomes thick and sticky.

In the lungs, the mucus clogs the airways and traps germs, like bacteria, leading to infections, inflammation, respiratory failure, and other complications. For this reason, minimizing contact with germs is a top concern for people with CF.

In the pancreas, the buildup of mucus prevents the release of digestive enzymes that help the body absorb food and key nutrients, resulting in malnutrition and poor growth. In the liver, the thick mucus can block the bile duct, causing liver disease. In men, CF can affect their ability to have children.

People with CF can have a variety of symptoms, including:

People with only one copy of the defective CF gene are called carriers, but they do not have the disease. Each time two CF carriers have a child, the chances are:

The defective CF gene contains a slight abnormality called a mutation. There are more than 1,700 known mutations of the disease. Most genetic tests only screen for the most common CF mutations. Therefore, the test results may indicate a person who is a carrier of the CF gene is not a carrier.

Diagnosing cystic fibrosis is a multistep process, and should include a newborn screening, a sweat test, a genetic or carrier test, and a clinical evaluation at a CF Foundation-accredited care center. Although most people are diagnosed with CF by the age of 2, some are diagnosed as adults. A CF specialist can order a sweat test and recommend additional testing to confirm a CF diagnosis.

According to the Cystic Fibrosis Foundation Patient Registry, in the United States:

Approximately 1,000 new cases of CF are diagnosed each year.

More than 75 percent of people with CF are diagnosed by age 2.

More than half of the CF population is age 18 or older.

The Foundation has thus far committed over $72 million to the Nonsense and Rare Mutations Research and Therapeutics Initiative, a multifaceted effort that already has funded more than 60 projects over the past several years at both academic institutions and pharmaceutical companies.

In 2018, the Foundation announced that it was committing $100 million to the Infection Research Initiative, a comprehensive approach to improve outcomes associated with infections through enhanced detection, diagnosis, prevention, and treatment.
Edits on 1 Jan, 2017 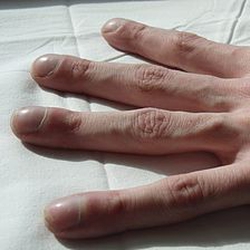 An autosomal recessive disease that is characterized by the buildup of thick, sticky mucus that can damage many organs.