Who was Aretha Franklin?

Aretha Louise Franklin, known as ‘The Queen of Soul’, was the first woman ever to be inducted in the Rock and Roll Hall of Fame. She was born in a religious household in Tennessee to Reverend C.L. Franklin. Her mother was a gospel singer. She was interested in music and singing from a very young age and taught herself to play the piano. Her father recognized her talent for singing and started to manage her from the time she was 14, trying to get her a deal with a record company. She was signed for the first time by Columbia Records, the association that lasted for 6 years and she became an instant international craze. Later, she signed the Atlantic records and Arista Records, the label that she stuck with for 20 good years. She was the winner of 18 Grammy Awards and has also received many American Music Awards. She had given to the world acclaimed albums like: ‘I Never Loved a Man the Way I Love You’, ‘Soul Lady’, ‘Young, Gifted & Black’, etc. She was one of the best-selling female artists of all time and had been listed twice on the ‘100 Greatest Artists of All Time’ and ‘100 Greatest Singers of All Time’ lists on the Rolling Stone magazine. 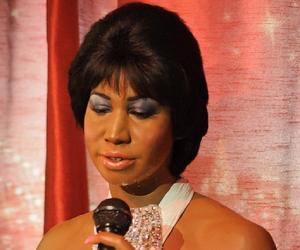 At the age of 14, Franklin’s talent for singing was recognized by her father who started managing her, to get her a recording deal. In 1956, her first album,Songs of Faith, came out under J. V. B. Records label.

In 1960, Franklin was signed by Columbia Records, after she persuaded her father to let her record pop music. Her popular single ‘Today I Sung the Blues’ was released in the same year - it reached the Hot Rhythm & Blue Sellers Chart.

In 1961, Franklin’s debut pop album came out with Columbia Records, titled ‘Aretha: With The Ray Bryant Combo’. The album was an instant hit with the American listeners and the hit single ‘Rock-a-bye’ catapulted her into an international star.

In 1962, the same recording company released two of her albums: ‘The Electrifying Aretha Franklin’ and ‘The Tender, the Moving, the Swinging Aretha Franklin’. By this time, she was called the ‘new-star female vocalist’ by A-list magazines.

From 1964-1966, Franklin released various hit singles like: ‘Runnin’ Out of Fools’, ‘One Step Ahead’, ‘Cry Like a Baby’, ‘You Made Me Love You’, etc. under Columbia Records. She also appeared on shows like Hollywood A Go-Go.

In 1967, Aretha singed to Atlantic Records and released ‘I Never Love a Man the Way I Love You’ which topped the R&B chart and the Billboard Hot 100 with hit singles like: ‘Do Right Woman, Do Right man’, ‘Respect’, etc.

In 1968, she released her albums: ‘Lady Soul’ and ‘Aretha Now’ with the Atlantic Records, giving hit singles like: ‘I say a Little Prayer’, ‘Think’, etc. She also received two Grammys and SCLC Drum Beat Award for Musicians.

During the same years, she recorded her first live album ‘Aretha Live at Fillmore West’. She gave out hit singles like: ‘Angel’, ‘Until You Come Back to Me’, ‘I’m in Love’, etc. She also worked on the soundtrack of the movie ‘Sparkle’.

In 1980, she signed the Arista Records and gave a memorable performance for the Queen of England at the Royal Albert Hall. She also did a cameo in the musical ‘The Blues Brothers’ in the same year.

During the same time, ‘Aretha’ was released. She got nominated for a Grammy for one of the singles from the album ‘I can’t Turn You Loose’. A hit single ‘United Together’ made to the number 3 on the R&B chart.

In 1981, Franklin released her album ‘Love All the Hurt Away’. The album included her famous duet with George Benson ‘Hold On, I’m Comin’, which eventually fetched her Grammy. It was her 11th Grammy so far.

In 1985, ‘Jump to It’ was released. It was a Gold standard album and a huge commercial hit after almost 7 years. The single from the album, with the same title, ranked first on ‘top 40 single on the pop charts’.

In 1985, she released ‘Who’s Zoomin’ Who’, which became her first platinum album and sold over a million copies. It included the hit singles like ‘Freeway of Love’ and ‘Sisters Are Doing It for Themselves’.

In 1987, she released another gospel album, titled ‘One Lord, One Faith, One Baptism’, which was followed by another one ‘Through the Storm’. Around the same time her album ‘What You See is What You Sweat’ was released.

In 1998, her album ‘A Rose Is Still a Rose’ was released, which turned out to be of Gold standard. During the same time, Franklin gave a performance at the Grammy Awards, singing ‘Nessun Dorma’ and received an international acclaim for it.

From 2004-2009, Franklin released albums like: ‘So Damn Happy’, ‘Jewels in the Crown: All-Star Duets with the Queen’ and ‘This Christmas ‘Tis of Thee’. She also performed at President Barack Obama’s inaugural ceremony.

From 2010-2013, she recorded an album under her own label, ‘Aretha: A Woman Falling Out of Love’. She was honored by a degree from the Yale University. She is now working under RCA Records.

Franklin announces she will retire from performing in concert after the release of one more album
Releases a new album, "Aretha Franklin Sings the Great Diva Classics"
Releases new album, "Aretha: A Woman Falling Out of Love"
Wins Grammy Award for Best Gospel Performance for "Never Gonna Break My Faith," shared with Mary J. Blige
Is awarded the Presidential Medal of Freedom by President George W. Bush
Is hospitalized and released for allergic reaction to antibiotics
Starts her own record label, Aretha's Records
Wins Grammy Award for Best Traditional R&B Vocal Performance for "Wonderful"
Is named a winner of the National Medal of Arts by the National Endowment for the Arts
Publishes an autobiography "Aretha: From These Roots"

Who was Aretha Franklin? Everything You Need to Know