Jazz, musical form, often improvisational, developed by African Americans and influenced by both European harmonic structure and African rhythms. It was developed partially from ragtime and blues and is often characterized by syncopated rhythms, polyphonic ensemble playing, varying degrees of improvisation, often deliberate deviations of pitch, and the use of original timbres. 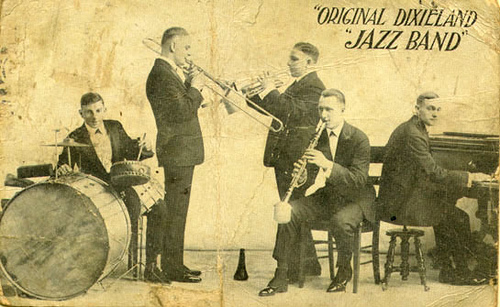 The elements that make jazz distinctive derive primarily from West African musical sources as taken to the North American continent by slaves, who partially preserved them against all odds in the plantation culture of the American South. Furthermore, Black slaves came from diverse West African tribal cultures with distinct musical traditions. Thus, a great variety of Black musical sensibilities were assembled on American soil. These in turn rather quickly encountered European musical elements—for example, simple dance and entertainment musics and shape-note hymn tunes, such as were prevalent in early 19th-century North America.

Jazz developed in the United States in the very early part of the 20th century. New Orleans, near the mouth of the Mississippi River, played a key role in this development. The city's population was more diverse than anywhere else in the South, and people of African, French, Caribbean, Italian, German, Mexican, and American Indian, as well as English, descent interacted with one another. African-American musical traditions mixed with others and gradually jazz emerged from a blend of ragtime, marches, blues, and other kinds of music. At first jazz was mostly for dancing. In later years, people would sit and listen to it. After the first recordings of jazz were made in 1917, the music spread widely and developed rapidly. The evolution of jazz was led by a series of brilliant musicians such as Louis Armstrong, Duke Ellington, Charlie Parker, and Miles Davis. Jazz developed a series of different styles including traditional jazz, swing, bebop, cool-jazz, and jazz-rock, among others. At the same time, jazz spread from the United States to many parts of the world, and today jazz musicians--and jazz festivals--can be found in dozens of nations. Jazz is one of the United States's greatest exports to the world.

Miles Davis - So What (Official Video)

Search on Google
Search on Bing
Title
Author
Date
Publisher
Description
The Jazz à l'Etage Festival is turning 10!
February 12, 2019
WebWire
The Jazz à l'Etage Festival will celebrate its 10th anniversary in Saint-Malo and the Rennes metropolitan area from February 9th to March 9th. Its ambitious program combines young talent and well-known musicians. The BNP Parisbas Foundation is pleased to renew its commitment to this major cultural event in Brittany (France), which promotes jazz in all its diversity. There are close ties between the festival and BNP Paribas. Since 2012, the Group supports Jazz à l'Etage through the...