CNN was an early adopter of Adobe Premiere Pro. Also, in 2007, certain BBC departments adopted Premiere Pro. It has been used to edit feature films, such as Deadpool, Gone Girl, Captain Abu Raed, Terminator: Dark Fate and Monsters, and other venues such as Madonna's Confessions Tour.

Premiere Pro is the successor to Adobe Premiere and was launched in 2003. Premiere Pro refers to versions released in 2003 and later, whereas Premiere refers to the earlier releases. Premiere was based on ReelTime, a product acquired from SuperMac Technologies Inc. and was one of the first computer-based NLEs (non-linear editing system), with its first release on Mac in 1991. Adobe briefly abandoned the Mac platform after version 6 of Premiere. Up until version Premiere Pro 2.0 (CS2), the software packaging featured a galloping horse, in a nod to Eadweard Muybridge's work, "Sallie Gardner at a Gallop".

Premiere Pro supports high resolution video editing at up to 10,240×8,192 resolution, at up to 32 bits per channel color, in both RGB and YUV. Audio sample-level editing, VST audio plug-in support, and 5.1 surround sound mixing are available. Premiere Pro's plug-in architecture enables it to import and export formats beyond those supported by QuickTime or DirectShow, supporting a wide variety of video and audio file formats and codecs on both MacOS and Windows. When used with CineForm's Neo line of plug-ins, it supports 3D editing with the ability to view 3D material using 2D monitors, while making individual left and right eye adjustments.

Premiere Pro can be used for all common video editing tasks necessary for producing broadcast-quality, high-definition video. It can be used to import video, audio and graphics, and is used to create new, edited versions of video which can be exported to the medium and format necessary for the distribution. When creating videos using Premiere Pro, various videos, still images and audio files can be edited together. Titles and motion graphics can be added to videos and filters can be applied along with other effects.

Premiere Pro was very well received at launch in the film and video industry, seeing use in films such as Superman Returns, Dust to Glory (for video capture processing), and also in places such as Madonna's Confessions Tour.

Video projects in Premiere Rush can be opened in Premiere Pro to add more complex edits and views.

Adobe Illustrator files can also be opened directly in Premiere Pro. These files are generally vector files, which means that they are mathematical paths that can expand or decrease with any zoom level.

The Premiere Pro workflow takes advantage of metadata in the script of video production. The script is created in or brought into Adobe Story, then passed to Adobe OnLocation to capture footage and attach any relevant metadata from the script to that footage. Finally, in Premiere Pro, speech recognition can match the audio to the dialogue from the script in the metadata. Clips can be searched based on their dialogue in Premiere Pro, and can be sent to Adobe Encore to make searchable web DVDs. Encore was discontinued with the release of Adobe Creative Cloud. Adobe Prelude replaces OnLocation in CS6 and above.

There are other integration functions, such as Edit in Adobe Audition, Dynamic Link to Encore, and Reveal in Adobe Bridge. In June 2020, Adobe launched a stock audio offering for Premiere Pro users.

Various extensions are available for Premiere Pro, provided by third parties. These include music libraries and graphic elements. Extensions open in their own panel within the Premiere Pro interface. 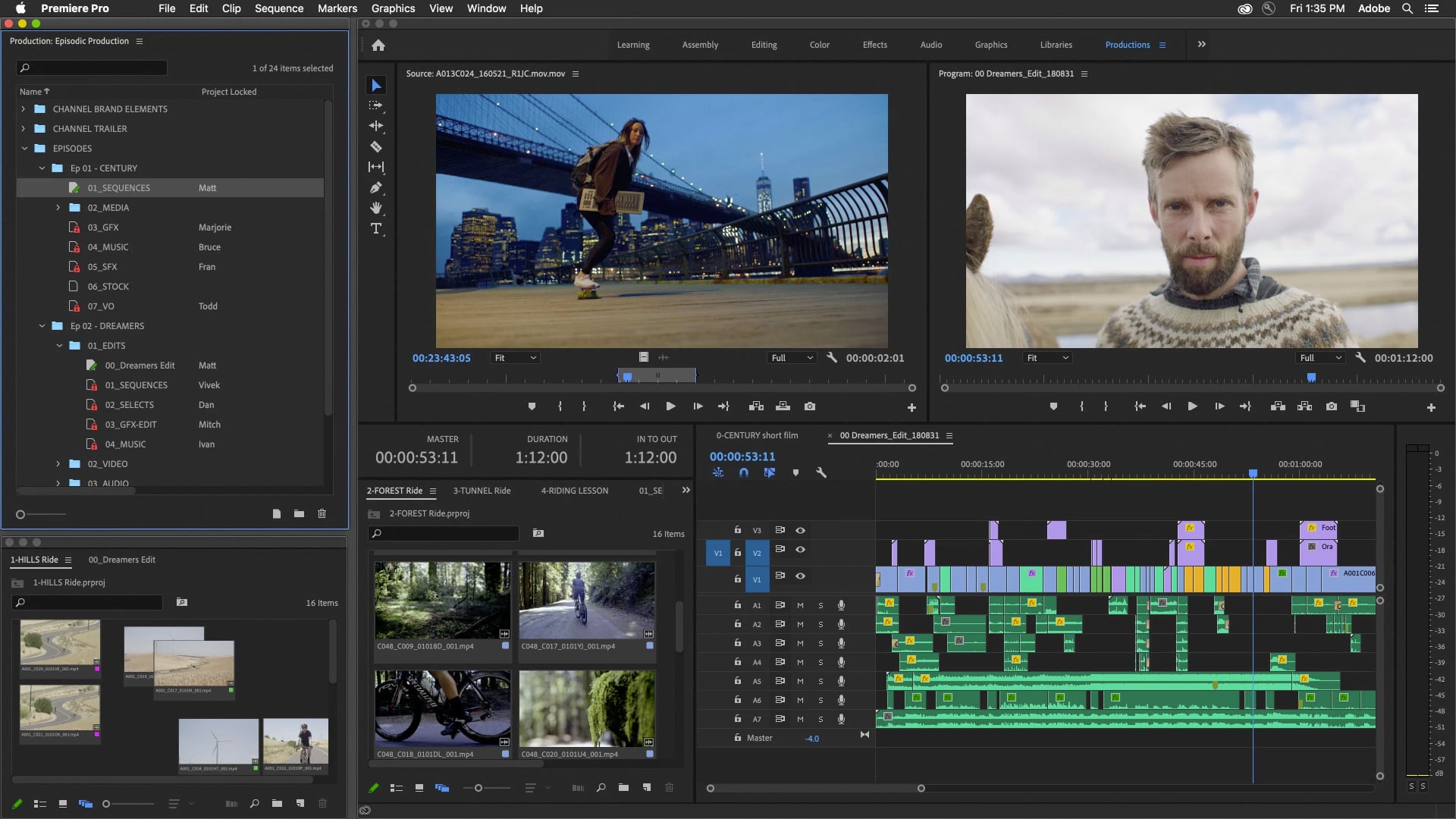