Adobe After Effects is a digital visual effects, motion graphics, and compositing application developed by Adobe Systems and used in the post-production process of film making, video games and television production. Among other things, After Effects can be used for keying, tracking, compositing, and animation. It also functions as a very basic non.

What is After Effects

After Effects can be used to design titles, create cartoon characters, and apply animation. Although it can do all these things, it is not the same as video editing software. This program is best used to apply effects after the footage has been edited, or to create animation and motion graphics from otherwise static objects. It is a tool for storytelling, creating visually appealing motion graphics that integrate into any medium to enhance a presentation, story, image, or mood. 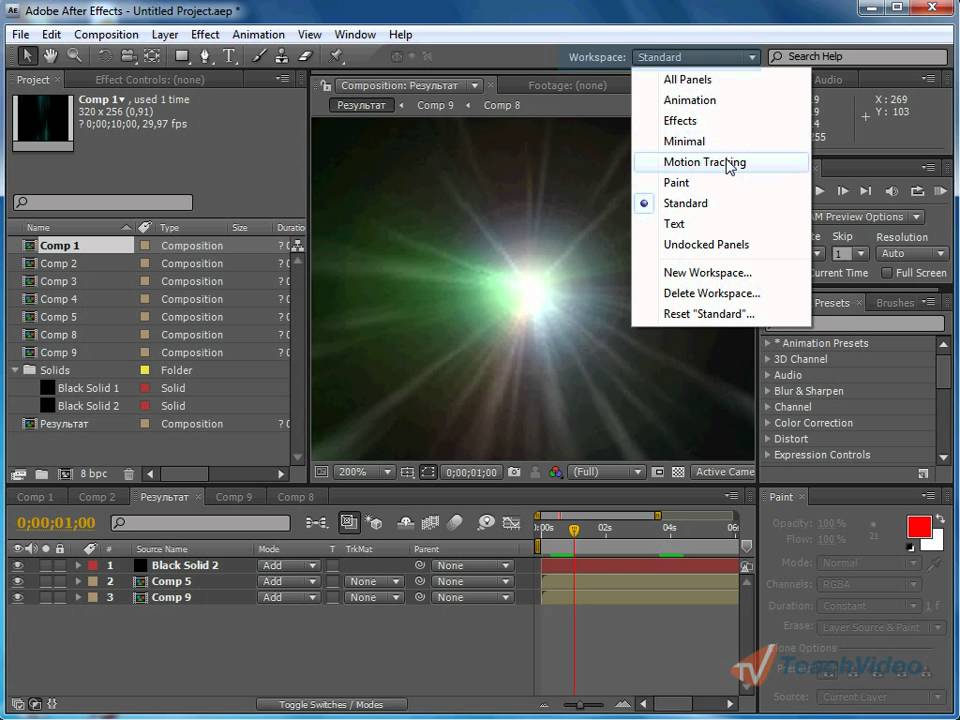 How After Effects is used

The primary uses of After Effects are divided into three categories: Animation, Effects, and compositing

The type of animation for which After Effects is mostly used is known as Motion Graphics, which involves creating motion and movement of traditionally static objects such as logos, text, and other graphic elements.

The type of Effects, sometimes called visual effects (VFX) are well known from film and video. Adding snow to a video scene, creating fire or water, making objects appear to turn into liquid are all examples of effects. You can use After Effects to create these visual effects from your own video.

Who uses After Effects

After Effects is the industry-standard software application for creating visual effects and motion graphics and can be purchased on its own or as part of the Adobe Creative Cloud. Gaining proficiency in After Effects program comes from in-depth training and hands-on use.

After Effects for TV, Movie, and video graphics

After Effects started as a program for graphics professionals to create high quality video for broadcast on television and it still is an important tool for broadcast-design professionals today. Walk into just about any post-production facility, advertising agency or motion graphic design studio in New York and you will find After Effects being used to create original content for video such as lower-thirds, bumpers, commercials, and title treatments. Many video professionals consider it an essential tool in their daily work for both motion graphics creations and compositing. In fact, you can see it in use by networks in NYC such as MTV, NBC, Spike, truTV, and the Food Network, where it’s used to produce stunning, high quality graphics and motion design packages quickly and affordably.

Companies of all sizes use the Internet as marketing and public relations tools and it is an excellent medium for displaying high quality motion graphics created using After Effects.

After Effects for presentation graphics

Digital displays, such as high-definition televisions, monitors, and projectors, are some other areas where motion graphics is displayed. Whether you walk into a Midtown NYC bank and see a display with an animated logo, or attend a NY Rangers game at Madison Square Garden and see animation on the scoreboard, you are viewing After Effects in action. After Effects is used to add impact to otherwise static objects. This can also involve corporate presentations with animation for slides, charts, and graphs. With the proliferation and affordability of high-definition televisions and other digital displays, many public venues, such as malls, retail stores, schools, and even military bases, are using motion graphics to both inform and entertain.

Adobe After Effects CC is the industry standard software for visual effects and motion graphics. It is part of the subscription-based Adobe Creative Suite. CC stands for “creative cloud” and is automatically updated for its users on a continuous basis. This collaboration also makes it easier to use other Adobe applications when needed. CC also allows syncing of your settings to use it on any computer anywhere in the world. Although the program can be stored locally, the subscription must be active to receive updates and have all functionality. Subscriptions can be cancelled at any time.

What is created with After Effects

As a creative and technical tool for video, effects, and compositing it can be used to compose, create and stylize 2D footage in a 3D space. After Effects can be used to design titles, create 2D cartoon characters, merge videos together into a single unified set of moving images, animate static logos and text. After Effects is not the same as video editing software, as it is generally used to apply effects after video footage has been edited or to create stand-alone motion graphics.