Chemical with molecular formula C8H10N2. Acetaldehyde phenylhydrazone (APH) is the first recorded example of a solid that forms two structurally distinct liquids when it melts.

Acetaldehyde phenylhydrazone (APH) is made by dissolving solid acetaldehyde into aqueous ethanol and then adding drops of liquid phenylhydrazine. APH crystals appear upon chilling the mixture. 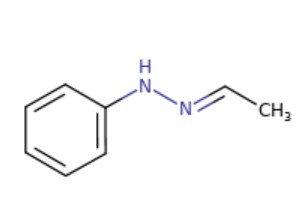 Acetaldehyde phenylhydrazone, C8H10N2, has a molecular weight of 134.181. APH is composed of a benzene ring attached to a pair of nitrogen atoms. One of the nitrogen atoms is attached to a hydrogen atom and a methyl group. There are two isomers, Z and E, where the methyl group points down or up respectively. As a solid, molecules of APH take the Z form but liquid APH also contains the E isomer. APH is the first recorded example of a solid that forms two structurally distinct liquids when it melts. Minute and almost undetectable contamination determine which of the liquids that will emerge.

Acetaldehyde phenylhydrazone (APH) is a crystal first produced in the laboratory of German chemist Emil Fischer and reported in his 1896 paper. APH was used in Fischer’s studies on sugar. Fischer won the 1902 Nobel Prize in Chemistry for synthesizing sugars and caffeine. It seemed that APH did not obey the laws of thermodynamics as different batches of APH melted at different temperatures, 65oC or 100oC, even though the crystals seemed identical and this was an unsolved mystery in chemistry for more than a hundred years.

In 2019 chemist Terry Threlfall at University of Southampton, UK and his colleagues reported a solution to the mystery in the journal Crystal Growth and Design. Threlfall’s group confirmed by X-ray diffraction, nuclear magnetic resonance, IR spectroscopy that APH crystal batches with two melting temperatures were identical. Adding drops of acid or alkali during the crystallization process was shown by both Fischer and Threlfall to steer formation of the low-melting version or high-melting version respectively. Threlfall found that only a whiff of acid or ammonia vapor was needed to switch the melting points.

Threlfall’s collaborator Hugo Meekes, a physicist at Radboud University in Nijmegen, Netherlands, analysed the high-melting and low-melting APH in liquid molten form by NMR and discovered that the two liquids had different spectra. They showed that the same solid crystal melted into two liquids with distinct compositions. While solid APH contains only the Z isomer with the methyl group pointing down, liquid APH, where molecules are spaced further apart, can switch between the Z isomer and the E isomer where the methyl group point up. Liquid APH switches back and forth between isomers until it settles on a stable mix of about one-third Z isomer and two-thirds E form.

APH is unusual in that the optimal isomer combination for liquid APH and solid APH are different. Threlfall and collaborators found that the high-melting solid APH crystal first melted to form liquid that was all Z isomer and then the Z-type molecules began to flip to E-type until they got to the stable mix. The low-melting solid APH crystal melted almost immediately to the stable mix of two-thirds E and one-third Z.

Similar to how salt lowers the melting point of water ice, a melting-point suppression occurs with APH. Threlfall suggested that hydrogen ions cling to the surface of the solid crystal and catalyze the shift from Z form to E form. Hydrogen ions could shift the electron density of the nitrogen atoms, loosening the connection between nitrogen and carbon atoms from a strong double bond to a weaker single bond that can rotate, allowing switching between Z and E forms. The catalysis speeds up the switch from Z to E so that it occurs as the solid melts.

The mysterious crystal that melts at two different temperatures