ACS Group is an industry. Construction and engineering services founded in 1942.

ACS Actividades de Construccion y Servicios SA provides construction and engineering services and specializes in civil works projects. It operates through the following segments: Construction, Industrial Services, Services and Corporate. t is one of the leading construction companies in the world, with projects in many countries around the world. The company was founded in 1997 as a result of the merger of OCP Construcciones, S.A. and Gines Navarro Construcciones, S.A. The group is present in Germany, India, Brazil, Chile, Morocco and Australia. The headquarters is in Madrid and the chairman is Florentino Pérez. The company was formed by a team of engineers when they decided to acquire Construcciones Padrós S.A., a financially struggling construction business, in 1983. The company acquired a majority stake in Cobra, an ancillary service business, and merged with OCISA SA to create OCP Construcciones, SA in 1993; in 1997 it merged with Ginés Navarro Construcciones, SA to create Grupo ACS. It subsequently bought Onyx SCL, an environmental contractor, in 1999 and, in 2000, stakes in telecommunications businesses Xfera and Broadnet, before acquiring Dragados SA, a major contractor set up during World War II to dredging the port of Tarifa, which subsequently acquired extensive experience in hydroelectric and civil works in 2003. 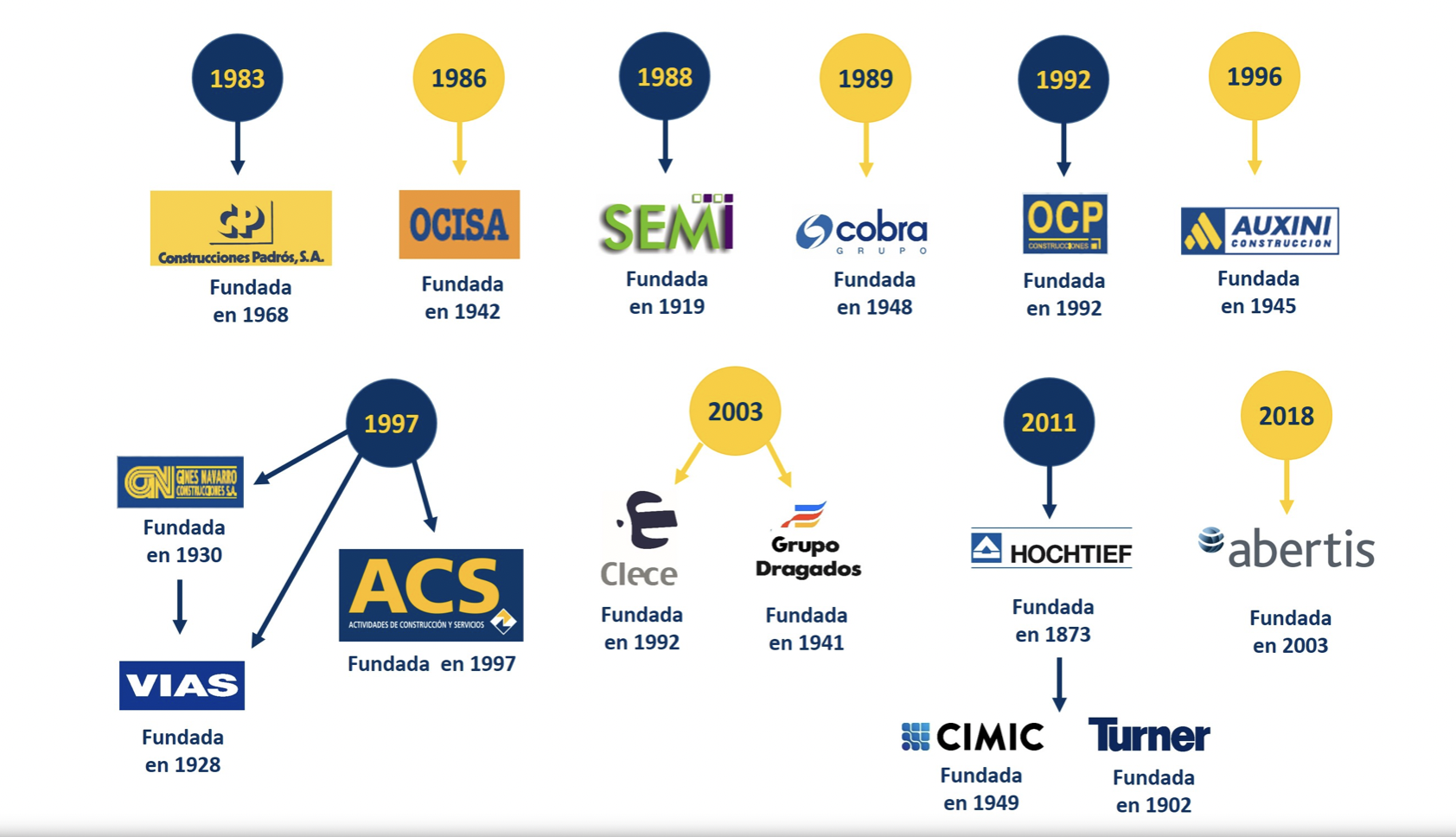 ACS Group has consistently been ranked #1 among the world's top transport developers by Public Works Financing Magazine, ranking as the world's leading concession group from 1994 to 2005 and from 2007 to 2012. In the coming years, the industrial services sector will continue to strengthen its position and leadership position in countries where it already has a strong implementation, combining it with a steady expansion into new geographic markets with great growth potential, using the synergies obtained from joint actions with other ACS companies. group.

The industrial services area will continue to focus on strengthening its position as a global benchmark in the sector through continuous technological innovation and technical excellence. As such, it aims to efficiently and economically combine industry support activities, which provide greater recurrence and stability, with Integrated Projects activities, which are highly specialized and specific solutions for each client, provide a higher level of profitability, and in 2020, there were more than 45,000 employees.

Today ACS Group is a large construction holding with a large number of business units operating in different countries of the world, including many countries in Europe, Asia, Africa, Oceania and South America. Now the corporation employs about 210 thousand people. ACS Group's estimated average annual profit is 2 billion euros, and its cash equivalent of assets is approximately 100 billion euros.

ACS Group has over 40 years of experience in managing and developing concession projects around the world and has successfully participated in over 152 public-private partnerships to date. Its current infrastructure portfolio includes 28 road projects, 5 railways and 12 public facilities, including bridges, transport hubs, airports, parking facilities, social infrastructure and ports.

Tertiary sector of the economy