U.S. state located in the north-central United States. Although industry is well developed in Wisconsin, and it is industrial production that provides most of the state's income, it is traditionally considered agricultural, or rather, the most "dairy" and "cheese" state in the United States.

On the territory of the modern state of Wisconsin, people have lived for about twelve thousand years. Gradually, the indigenous people of the American continent moved from hunting and gathering to farming, approximately two and a half thousand years ago, the first permanent settlements appeared on the lands of Wisconsin.

The Indian tribes of Wisconsin in the first millennium AD are known for their culture of "shaped mounds", mounds depicting animals or people. Such mounds can be seen in many other states of the US, especially in the Midwest, but Wisconsin has more of them than in any other region of the US.

Later, around the 11th century, "Mississippi culture" spread to Wisconsin. It is characterized by a developed agriculture with corn as the main crop, and a significant centralization of political and religious power. On the site of an Indian settlement that existed in the 10th-13th centuries, dating back to the period of the Mississippian culture, near the city of Aztalan, there is a US National Historic Monument (and a Wisconsin state park). The first European to land in Wisconsin was the Frenchman Jean Nicolet in 1634. On the instructions of the governor of the colony of New France, Samuel de Champlain (who himself was an outstanding explorer of the northeastern regions of the modern United States, in particular Massachusetts, Vermont, New Hampshire and Maine), Jean Nicolet was looking for a waterway through the North American continent to the Pacific Ocean. Nicolet passed through Lake Huron, Lake Superior and Michigan in a canoe, landing on the shores of Wisconsin near the modern city of Green Bay.

Famous natives and residents of Wisconsin

John Muir (John Muir, 1838-1914) - naturalist and writer, one of the initiators of the creation of reserves in the United States, known as the "Father of National Parks". Born in Scotland, but later lived in Wisconsin.

Carrie Chapman Catt (1859-1947) was the leader of the suffragette movement in the United States, and played a large role in the struggle for the passage of the Nineteenth Amendment to the US Constitution, giving women the right to vote. Born in the city of Ripon. Harry Houdini (1874–1926) was a well-known illusionist and performer of escape tricks. Born in Hungary, but spent his childhood in Appleton, Wisconsin.

Douglas MacArthur (Douglas MacArthur, 1880-1964) - the famous general, participant in the First and Second World Wars, as well as the Korean War. He was born in Arkansas, but later lived in Milwaukee.

Golda Meir (1898–1978) is a politician and prominent statesman of the State of Israel. Born in Kiev, but later lived in Wisconsin.

George Frost Kennan (1904–2005) was a dimlomat, known as the ideologist of the "containment policy" during the Cold War. Born in Milwaukee.

Lester William "Les Paul" Polsfuss (1915–2009) was a musician, poet, and one of the inventors of the electric guitar. Born in Wakeshaw.

Seymour Cray (1925-1996) - engineer, creator of a series of supercomputers. Born in Chippewa Falls.

Baking - kringle (a type of pretzel) The largest urban agglomerations in Wisconsin formed around the cities of Milwaukee and Racine (more than 1,550,000 people, thirty-ninth place in the list of US metropolitan areas) and Madison (about 570,000 people). In addition, the city of Kenosha, located in the southwest of the state, is part of the third largest metropolitan area in the United States, formed around Chicago in neighboring Illinois.

The largest ethnic (national) groups among the population of Wisconsin:

Wisconsin has the largest percentage of ethnic Poles of any US state.

Although industry is well developed in Wisconsin, and it is industrial production that provides most of the state's income, it is traditionally considered agricultural, or rather, the most "dairy" and "cheese" state in the United States. Wisconsin is often jokingly referred to as America's "Dairy Country" and its inhabitants as "Cheeseheads". 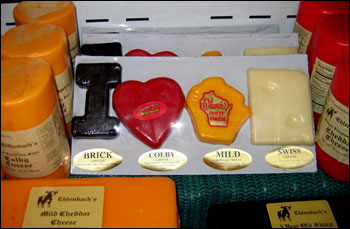 Indeed, Wisconsin leads the United States in terms of cheese production, providing about a quarter of the national production of this most popular product. There are about thirteen thousand dairy farms in the state, which contain more than a million and a quarter cows. Wisconsin ranks second (after California) in the United States in terms of milk production (and third, after Idaho and Vermont, in per capita milk production). Almost 90% of milk goes to the production of cheese. Cheesemaking in Wisconsin has been developing since the middle of the 19th century, and today about one hundred and thirty cheese makers in the state produce more than a million tons of cheese per year.

Title
Author
Date
Publisher
Description
Federal judge sets hearing on blocking Wisconsin wolf hunt
October 1, 2021
AP NEWS
MADISON, Wis. (AP) -- A federal judge on Friday scheduled a hearing for later this month on whether to block Wisconsin's fall wolf hunt. Six Chippewa tribes filed a lawsuit in the Western District of Wisconsin on Sept.
Wisconsin signs $17M contract to update unemployment system
September 29, 2021
AP NEWS
MADISON, Wis. (AP) -- Wisconsin has entered into a nearly $17 million, multi-year contract with software development company Flexion to update the antiquated system for paying unemployment claims that was overwhelmed last year during the start of the COVID-19 pandemic, the state announced Wednesday.
Enbridge: Line 3 replacement complete; oil will flow Friday
The Associated Press
September 29, 2021
CTVNews
Enbridge announced Wednesday that construction on the upgrade of its Line 3 crude oil pipeline across Minnesota is 'substantially complete' and that the company will start filling it with oil Friday.
US has enough COVID-19 vaccines for boosters, kids' shots
By TODD RICHMOND and KATHLEEN FOODY
September 26, 2021
AP NEWS
MADISON, Wis. (AP) -- With more than 40 million doses of coronavirus vaccines available, U.S. health authorities said they're confident there will be enough for both qualified older Americans seeking booster shots and the young children for whom initial vaccines are expected to be approved in the not-too-distant future.
Democrats say Fort McCoy refugees are being properly vetted
September 8, 2021
AP NEWS
SPARTA, Wis. (AP) -- Several Democratic members of Wisconsin's congressional delegation who toured Fort McCoy say they're confident Afghan refugees arriving at the Wisconsin base are being properly vetted before they resettle across the country.
SHOW MORE
wisconsin.gov
Is a