Wireless mesh network is a type of network topology that enables cost-effective and low-mobility network access to a local region.

Wireless Mesh Networks (WMNs) are formed by a set of gateways, mesh routers, and mesh clients. Gateways and stationary mesh routers constitute the network's backbone. Mesh clients include cell phones, laptops, or other wireless devices. Routers communicate with the external network (e.g. the Internet) by forwarding each other’s traffic towards the gateway nodes, which are directly connected to the wired infrastructure. 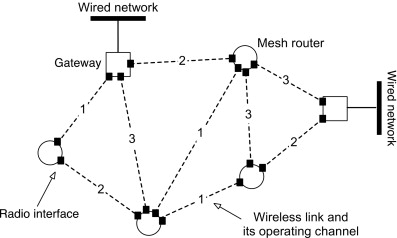 The diagram on the right illustrates a sample wireless mesh network consisting of six mesh routers, two of which also function as gateways. Advantages of WMNs include low upfront cost, rapid deployment, ease of installation and maintenance, and reliable service coverage. Additionally, in comparison to traditional ad hoc networks, the resources of routers in meshes are not limited, meaning that they can perform more resource-intensive functions.

In a WMN, each router forwards packets on behalf of other nodes (which may not be within direct wireless transmission range of their destinations). Moreover, the gateway functionalities enable the integration of WMNs with various existing wireless networks, such as Wi-Fi, cellular networks, WiMax, and others. In this type of network, the nodes automatically establish and maintain mesh connectivity among themselves (forming an ad hoc network). As a result, a WMN is self-organized, self-configured, and redundant (the failure of one node does not prevent other nodes from communicating).

WMNs have the potential to improve the performance and capacities of other types of ad hoc networks, including wireless local area networks (WLANs), wireless personal area networks (WPANs), and wireless metropolitan area networks (WMANs). WMNs are a universal solution applicable to a variety of small-, medium-, and large-scale scenarios, including personal, local, campus, and metropolitan areas. Mesh technology finds many applications in wireless multi-player gaming, campus connectivity, military communication, municipal networks, and more. Some of the specifications of WMNs include:

The figure below illustrates the connectivity of a wire mesh network. 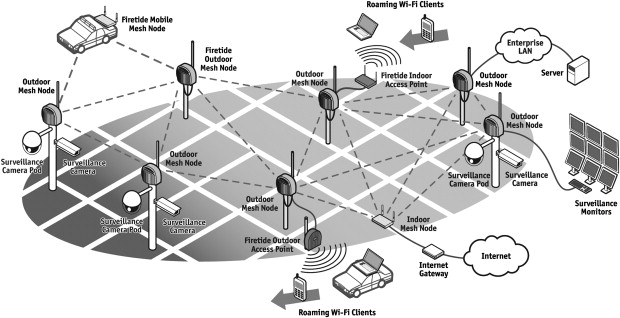 Infrastructure or backbone meshes are formed by a set of mesh routers connected by self-configuring and self-healing wireless links. Some of the routers have a gateway function, providing Internet connectivity for other routers and clients that connect to them.

Client meshes are mobile ad hoc networks, where each client acts as an independent router with no centralized routing control. In this type of infrastructure, clients can perform network tasks such as routing and forwarding.

Hybrid meshes are the most generic type of architecture, combining both infrastructure and client meshes. Infrastructure provides connectivity to other networks such as internet, and clients provide a dynamic extension of the network.

The integration of WMNs with other networks such as the Internet, cellular, IEEE 802.11, IEEE 802.15, IEEE 802.16, sensor networks, etc., can be carried out through the gateway and bridging functions in the mesh routers.

By leveraging IEEE 802.11 (commonly known as Wi-Fi) hardware, wireless mesh networking reduces the dependency on wired infrastructure, which makes it useful for providing inexpensive Internet access to low-income and low-population areas. The capacity of effective throughput that can be utilized by the clients is a key challenge in the implementation of wireless mesh networking.

To lessen the interference and increase the capacity of a wireless mesh network, the devices may also transmit over different non-overlapping channels provisioned in the IEEE 802.11 standards. This is done by equipping the routers with multiple radio interfaces tuned to isolated individual channels. The network capacity of a multi-radio wireless mesh network is dependent on how various channels are assigned to each radio interface to form a minimum-interference mesh network. For the mesh network to remain connected, the number of channels assigned to a router has to be at most the number of interfaces on the router.

Routing protocols designed for mobile ad hoc networks (MANETs) focus chiefly on locating a single most efficient route to any destination out of the various paths available. In wireless mesh networks, traffic is primarily routed either towards the Internet gateways (IGWs) or from the IGWs to the access points. In order to perform effectively, WMN routing protocols must take into consideration the following:

The objective of multipath (also called SAN multipathing or I/O multipathing) routing in a wireless mesh network is to use several effective paths to reach destinations without imposing excessive control overhead to maintain them. Multipath routing helps networks to stabilize and adapt to load.

Protocol constraints limit the self-organizing, -healing, and -conﬁguring advantages of WMNs. Implementations of WMNs mostly utilize single path MANET routing protocols, but this is not an optimal solution for the redundant, hierarchical, and layered architecture of wireless mesh networks. In WMNs where the number of redundant paths exceeds those in conventional last-hop wireless or wired networks, multipath routing would improve reliability and performance of end-to-end communication. Potential benefits of multipath routing include:

The global wireless mesh network market size was valued at USD 6.11 billion in 2018 and is projected to expand at a compound annual growth rate (CAGR) of 9.1% from 2019 to 2025. This expansion is driven by the accelerated usage of Artificial Intelligence (AI) and Internet of Things (IoT) technologies in various industries.

It is anticipated that the increased usage of mobile and handset devices along with developments in technologies used in such devices will contribute to further market growth, as well as the adoption of 3G, 4G, and LTE technologies. North America is expected to lead the global market in the future as the region has a large number of Wi-Fi/WLAN networks. Other contributors to the WMN market include:

The WMN market in Asia-Pacific

The WMN market's impact is predicted to be significant in Asia-Pacific as it is considered to be an emerging economy. WMN networks are implemented in industrial and commercial segments including public safety, industrial automation and monitoring, mining automation, environmental monitoring, malls, shopping centers, and hi-tech city parks, which are a part of the smart infrastructure development in this region.

5 GHz is an effective solution to respond to the ubiquitous demand for faster network speeds and is estimated to be the fastest-growing radio frequency segment between 2019 and 2025. As per the World Telecommunications Conference, the 5 GHz spectrum was allocated for unlicensed usage by developed countries.

5G is expected to provide benefits in three major areas, also known as the “5G triangle”: 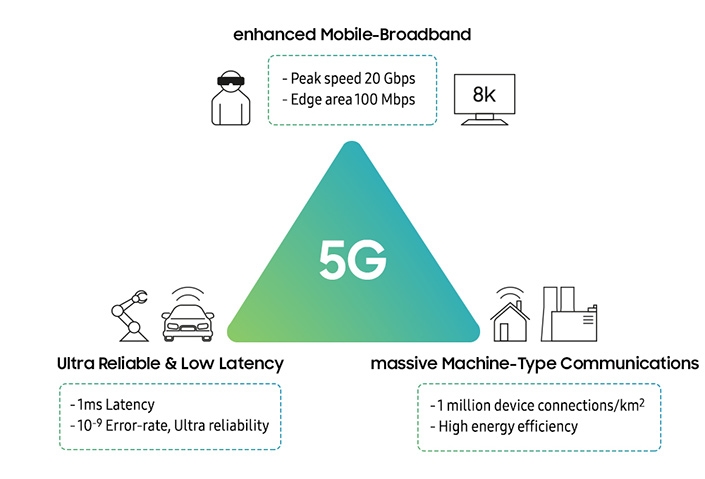 The reduced latency provided by 5G networks will be beneficial for autonomous vehicles, as they will be able to respond 10-100 times faster than over ordinary cellular networks. A vehicle-to-everything (V2X) communication network is a possibility in the future. This would enable vehicles to automatically and instantaneously respond to objects and changes around them. It is necessary for autonomous vehicles to be able to send and receive signals in milliseconds in order to brake or shift directions in response to road signs, hazards, and people crossing the street.

As cities deploy intelligent transportation systems (ITS), the need for connected vehicle technology increases. Some aspects of these systems are relatively easy to install using communications systems that support smart traffic management to handle vehicle congestion and route emergency vehicles.

The low latency of 5G will enhance the immersiveness and interactivity of AR and VR applications. In industrial applications, for instance, a technician equipped with 5G-powered AR goggles could have their vision augmented with an overlay that would aid them by identifying parts of machinery, providing repair instructions, or highlighting hazards.

Drone-powered solutions have become increasingly present in the consumer market (for filming, photography, or recreational flying) and across many industries, including utilities (e.g. equipment inspection), logistics, and retail (e.g. delivery of goods). As the market expands, the introduction of 5G can improve the range and interactivity of drones, strengthening both the drone and 5G markets.

Wearables, trackers, and sensors are projected to constitute a large share of the 5G market. Every device connected over a cellular connection can potentially benefit from 5G, which will enable yet more devices to gain connectivity and operate at low latency in any given area.