Micheal Ray Nguyen-Stevenson, better known by his stage name Tyga, is a well-known American rapper. Born to Vietnamese-Jamaican parents, Tyga was influenced by a low socioeconomic background and street life during his childhood. His cousin introduced him to rap music, which had a major impact on his life and encouraged him to take up music as a profession. There are various stories about the origin of his nick name ‘Tyga.’ He made it big with his music albums and mixtapes, which were made in collaboration with other big names in the industry. His music videos are known for explicit scenes and deep lyrics. He has also produced and acted in a few adult movies. His career has had its ups and downs; while he has earned a ‘Grammy’ nomination and ‘MuchMusic Video Award,’ he has also faced several legal issues. His personal life has also been turbulent; he has had a string of relationships and a son born out of marriage. After three successful albums, his fourth album had problems being released. However, he managed to release it and followed it up with other albums. He has a number of friends in the American rap scene and several followers on social media. 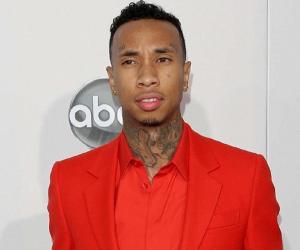 After the success of his 2007 debut mixtape ‘Young On Probation,’ Tyga signed a record deal with Lil Wayne’s ‘Young Money Entertainment.’ The track ‘Deuces,’ which he performed with Chris Brown and Kevin McCall, was released as his debut single. The single reached number 14 on the ‘Billboard Hot 100’ and number one on the ‘Billboard Hot R&B / Hip Hop Songs’ list. The song went on to receive a ‘Grammy’ nomination for ‘Best Rap / Sung Collaboration

Thanks to his cousin McCoy, he toured with ‘Gym Class Heroes’ and made his first independent album titled ‘No Introduction,’ which was released by ‘Decaydance Records’ in 2008. His song ‘Diamond Life’ got featured in the movie ‘Fighting.’ It was also used in video games, such as ‘Need for Speed: Undercover’ and ‘Madden NFL 2009.’

Before he made his first studio album, he made a number of mixtapes and singles that kept him in the public eye. By then, he had established himself and was recording for ‘Young Money Entertainment,’ ‘Cash Money Records,’ and ‘Republic Records.’

After his initial success with ‘Money Entertainment,’ he collaborated with big names like Rick Ross, Chris Brown, and Bow Wow to make a splash in the music scene. He signed up with Kanye West’s ‘Good Music Imprint’ to start a new chapter in his music career.

Tyga’s style transformed with the release of his ‘Young Money’ debut album ‘Careless World: Rise of the Last King’ in 2012. It contained a snippet of Martin Luther King Jr’s ‘I've Been to the Mountaintop’ speech that had to be removed before the album was released. The album reached number four on the ‘US Billboard Top 200’ and featured guest artists like T-Pain, Pharrell, Nas, Robin Thicke, and J Cole.

In April 2013, he released his third album ‘Hotel California.’ The album received mixed reviews and was referred to as “the least creative major label rap album in recent memory.” It was a tough period for Tyga as his album ‘The Gold Album: 18th Dynasty’ and duet with Justin Bieber had to be put on hold as he fell out with ‘Young Money.’

In September 2016, Kanye West, the brother-in-law of his then-girlfriend Kylie Jenner, announced that Tyga had been signed with ‘Good Music,’ under the aegis of ‘Def Jam Recordings.’ Some saw this as the only opportunity for Tyga to redeem himself in the world of music.

Under ‘Good Music,’ he released his fifth studio album ‘BitchImTheShit2’ in July 2017, which performed poorly on the ‘Billboard’ charts. He followed it up with his sixth album ‘Kyoto,’ which featured artists like 24hrs, Gucci Mane, and Tory Lanez.

‘Kyoto’ received negative reviews from critics. It also failed to impress music lovers, putting Tyga in a spot of bother.

In an attempt to revive his career, he released his next single titled ‘Taste’ in 2018. Featuring Offset, the single became an instant hit. It received a 6x platinum by RIAA and helped his career get back on track.

He followed it up with his next single ‘Swish,’ which received Gold certification. In 2019, he released his seventh studio album ‘Legendary,’ which reached no. 17 on ‘US Billboard 200.’

Tyga - "Taste" in 360° from Wireless Festival with MelodyVR