Who is Tina Fey?

Elizabeth Stamatina Fey, better known by her nickname Tina Fey, is an American actress, comedian, writer, and producer. She is best known for her work in Saturday Night Live and 30 Rock. Even as a college student, Tina was interested in pursuing a career in comedy. She got her major breakthrough in 1997 when she was hired as a writer for Saturday Night Live, a late-night live TV comedy show. After just two seasons, she was promoted to the post of head writer, the first female to become the head writer in the show’s history. She then went on to create the TV comedy series 30 Rock, loosely based on her experiences as a writer for Saturday Night Live. The show was a huge critical success and won several awards. She has also made several film appearances, notably in films like Martin & Orloff, Mean Girls, and Baby Mama. Even after leaving Saturday Night Live, Tina Fey has made frequent guest appearances on the show. During her guest appearances, she performed a series of parodies on American politician Sarah Palin. Her performance was much loved and won her numerous accolades. She also authored a book, a comic autobiography titled Bossypants in 2011 which topped The New York Times best seller list. In addition, she also takes active interests in several charities. 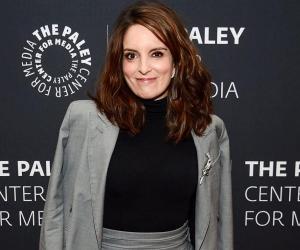 Tina Fey’s writing and acting career began in 1997 when she was selected as a writer for NBC’s variety show Saturday Night Live. In 1999, she became the show’s first female head writer.

She began performing sketches in 2000. Along with Jimmy Fallon, she became the co-anchor of Saturday Night Live’s Weekend Update. In 2004, Fallon was replaced by Amy Poehler. For the first time Weekend Update was anchored by two women. The pair got positive response from the public.

She wrote the screenplay for the 2004 teen comedy film Mean Girls in which she also portrayed a role. The film depicts the effects of high school social cliques on teenage girls.

She co-starred with her former colleague Amy Poehler in the comedy film Baby Mama which released in 2008. The same year, she voiced Lisa’ in Ponyo, a Japanese animated fantasy film.

In 2013, she was seen in the romantic comedy film Admission. In 2014, she starred in the movie This Is Where I Leave You and Muppets Most Wanted.

From 2017 to 2018, she portrayed ‘Diana St. Tropez’ on NBC's ‘Great News.’ In 2019, Tina Fey was seen in Netflix movie Wine Country and Amazon anthology series Modern Love. She cocreated the Netflix series Unbreakable Kimmy Schmidt, which ran from 2015 to 2019.

In 2020, she portrayed the role of Lemon for 30 Rock: A One-Time Special and voice acted in the Pixar animated film Soul.

Who is Tina Fey? Everything You Need to Know

Who is Tina Fey? Everything You Need to Know

Mean Girls
‌
Whiskey Tango Foxtrot
‌
This Is Where I Leave You