When a beautiful stranger leads computer hacker Neo to a forbidding underworld, he discovers the shocking truth--the life he knows is the elaborate deception of an evil cyber-intelligence.

The film depicts a future in which people are forcibly connected by insurgent machines to the Matrix, an interactive computer program that simulates reality. In this way, machines get from people the energy they need to survive. The hacker Neo must learn what the real world is and become the liberator of humanity.

At night, some people are harassed by government agents and police. The fugitive woman runs to the phone booth and disappears. During the day, programmer Thomas Anderson works for a large company, and at night he leads the life of a hacker nicknamed Neo. He learns about the influential hacker Morpheus and suddenly receives mysterious messages on the computer. Someone advises him to follow the white rabbit and later Thomas sees a girl with a rabbit tattoo. The hacker goes with her and her friends to a nightclub, where the girl introduces herself as Trinity, another famous hacker. Trinity warns - Neo is being watched.

Morpheus teaches Neo to fight machines and people in simulations. But he warns that if a person dies in the Matrix, he actually dies. The only way out of the imaginary world into the real world is a telephone, so Neo has to look for a handset in case of danger. Having gained enough experience, Neo of Trinity goes to the prophetess Pythia in the Matrix to check whether he is really the chosen savior of mankind. Meanwhile, on board the "Nebuchadnezzar" is a traitor Cypher. He secretly goes to the Matrix and meets with her service programs, Smith's agents. Cypher offers to help get access codes to Zion, and in exchange wants to get a new life in the Matrix as a rich celebrity. 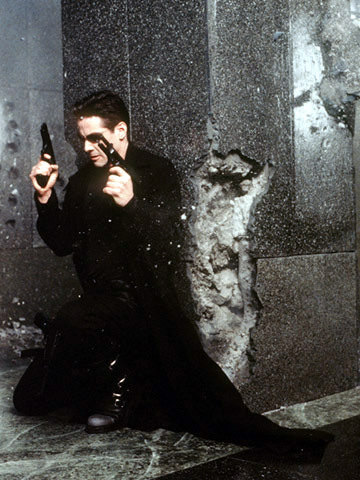 Entering the Matrix, Neo looks at it quite differently, realizing that the whole illusory world is built to control people. He, Morpheus and Trinity manage to find Pythia. The prophetess shows other potential chosen ones who know how to change the Matrix, creating such phenomena as telekinesis. The boy teaches Neo that the Matrix does not really exist, it is just electrical signals coming to the brain. Therefore, a person can change it at will. Pythia claims that Neo was not chosen, but foretells: he will have to choose who to live next: Neo or Morpheus. When he leaves Trinity to get out of the illusion, Neo feels deja vu. This is a sign of machine intervention and the Smith's chase soon begins.

Interrogating Morpheus, Smith calls people a mistake of nature that destroys their habitat. Therefore, the world must belong to machines that bring order, and people must serve them. Tank offers to kill Morpheus without letting the cars break him. But Neo decides to go to the Matrix and save the commander, even at the cost of his life. Armed, he and Trinity attack the building where Morpheus is being held. Remembering that the Matrix is ​​unreal, Neo is able to dodge bullets, thus temporarily overcoming enemy programs. After defeating numerous Smiths and people loyal to the Matrix, he rescues Morpheus from Trinity. As they emerge from the Matrix, Smith shoots into the phone, cutting off the path to reality. 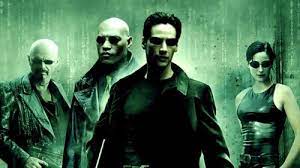 The Matrix was founded.

...
warnerbros.com/movies/matrix
Is a
‌
Creative work