The economy of Tennessee is very diversified, there is no one leading industry, but there are successfully operating financial companies, industry, agriculture, mining, tourism, entertainment and other areas.

Archaeological studies show that people lived on the territory of the modern state of Tennessee at least twelve thousand years ago. Remains of several Mississippian Indian settlements known as "mound builders" (ca. 1000-1600) have also been found in the state. The ancient inhabitants of Tennessee were characterized by well-developed agriculture (the main crop was corn) and trade, a rather complex hierarchy of society, and, of course, the construction of earthen mounds (mounds) that had ceremonial significance. By the time Europeans arrived, the Muscogee (Creek), Yuchi, Cherokee, Chickasaw, Choctaw, and others lived here. 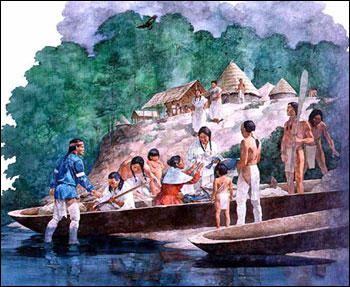 The first European explorer of Tennessee was the Spanish conquistador Hernando de Soto, who during his famous expedition in 1539-40 passed through the territory of Florida, Georgia, South Carolina, North Carolina, Tennessee, Alabama and Mississippi. Following him, Tennessee was explored by the Spaniards Tristan de Luna (in 1559) and Juan Pardo (in 1567). After the first meetings with Europeans, the population of Indian settlements decreased sharply due to diseases brought from the Old World, to which the native inhabitants of America had no immunity.

In 1682, the famous Rene de La Salle, who descended from the Great Lakes to the Gulf of Mexico along the Mississippi River and declared the land in its basin the property of France, stopped for several days in the area of ​​modern Memphis. He fortified his camp with a stockade and named it Fort Prudhomme, it was the first European settlement in Tennessee.

The first English settlement in the state was founded in 1756, when colonists from South Carolina built Fort Loudon in eastern Tennessee, which at that time became the westernmost outpost of the English colonies.

In 1790, the US government created the Southwest Territory, which included the modern state of Tennessee, as well as parts of Alabama and Mississippi. In 1795, the Tennessee Constitution was adopted, and on June 1, 1796, Tennessee became the sixteenth state of the United States, the first capital of the new state was the city of Knoxville.

Three physiographic regions are distinguished on the territory of the state: Eastern, Central and Western (they are symbolized by the three stars on the Tennessee flag). Interestingly, unlike any other US state, the division into regions (along with the generally accepted division into districts) in Tennessee is confirmed by law and their boundaries are clearly defined. This is due to the historically established quotas for the representation of regions in government (for example, there can be no more than two out of five judges of the State Supreme Court from one region).

East Tennessee is part of the Appalachian Mountains. On the border with North Carolina, the Blue Ridge ("Blue Ridge"), covered with dense forests, stretches. It is here that Mount Clingmans Dome (2,025 meters above sea level) is located, the highest point in Tennessee, as well as the Appalachian Trail, which is very popular with American hikers (it starts in the south, in Georgia, and goes through the states of North America). The Carolinas, Tennessee, Virginia, West Virginia, Maryland, Pennsylvania, New Jersey, New York, Connecticut, Massachusetts, Vermont, New Hampshire and Maine are also home to the Great Smoky Mountains National Park (one of the most popular tourist attractions USA) and the Cherokee National Forest.

West of the Blue Ridge is the Tennessee Valley ("Big Valley"), part of the Appalachian Ridge and Valley ("Ridges and Valleys") region. Numerous rivers and streams flowing from the mountain slopes separating the fertile valleys form here the sources of the Tennessee River, the largest in the state.

Central Tennessee is bounded to the east by the slope of the Cumberland Plateau, and to the west by the Tennessee River, which looped through Alabama and flowed north to Kentucky. It is a rolling plain with fertile land, much like the Bluegrass region in the Bluegrass State.

West Tennessee is a lowland bordered by the Mississippi River to the west and the Tennessee River to the east, with extremely fertile and excellent agricultural land. This is part of the "Mississippi Valley" between the Appalachians and the Inner Highlands, filled for millennia with alluvial (floodplain) deposits of the greatest river in North America.

About 6,410,000 people live in the state of Tennessee (seventeenth most populous among US states). The average population density in Tennessee is about 60 people per km2 (twentieth place in the USA). 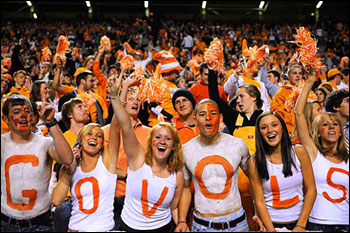 The largest ethnic (national) groups among the population of Tennessee:

Referring themselves to the ethnic group "Americans" during the census are, as a rule, the descendants of the British and Scots who have lived in the United States for many generations.

The economy of Tennessee is very diversified, there is no one leading industry, but there are successfully operating financial companies, industry, agriculture, mining, tourism, entertainment and other areas.

Many important transport routes pass through Tennessee, Memphis Airport occupies one of the first places in the world in terms of cargo traffic, so it is no coincidence that the headquarters of one of the largest US logistics companies FedEx is located here.

The state's industries produce textiles, food, semiconductor products, medical equipment, chemicals, musical instruments, and military products. Recently, the automotive industry has been developing in Tennessee, for example, a Volkswagen plant is operating in Chattanooga, and Nissan is operating in Smyrna.