Supercomputers refer to any of a class of high-level computers with performance far exceeding that of a general-purpose computer.

A supercomputer refers to any of a class of high-level computers with performance far exceeding that of a general-purpose computer. The phrase is generally used to describe the fastest and most powerful computers at any given time. Supercomputers are made up of interconnects, I/O systems, memory, and processor cores. Compared with traditional computers, supercomputers use multiple central processing units (CPU), that are grouped into compute nodes. Supercomputers can contain tens of thousands of nodes, with interconnecting communication capabilities to collaborate on solving a specific problem.

Supercomputers are applied to data-intensive and computation-heavy applications, often for scientific research or engineering calculations, including the following:

With reductions in cost during the 1990s, supercomputers began to find wider use across businesses for market research and other related modeling. In recent years, many organizations requiring large processing power have begun using cloud computing over supercomputers. High-performance computing (HPC) via the cloud is more affordable, scalable, and easier to upgrade compared with on-premises supercomputers.

Early computers, such as the Colossus and ENIAC, are sometimes referred to as supercomputers. However, the phrase "supercomputer" didn't come into use until the early 1960s.

Colossus, the first functional, electronic, digital computer designed by Tommy Flowers and built at Bletchly Park, began operations in 1944. The machine was designed to help British code-breakers during World War II working on a German cipher code-named "Tunny." The existence of Colossus was kept secret until 1975.

ENIAC, formally known as the Electronic Numerical Integrator and Computer, was the first vacuum tube, all-electronic, programmable computer to be unveiled to the world. Designed by John Mauchly and J. Presper Eckert in Philadelphia, ENIAC was revealed on the front page of The New York Times on February 14th, 1946. ENIAC was assembled and operated at the University of Pennsylvania. The machine was used to calculate complex trajectories for missiles and other armaments. 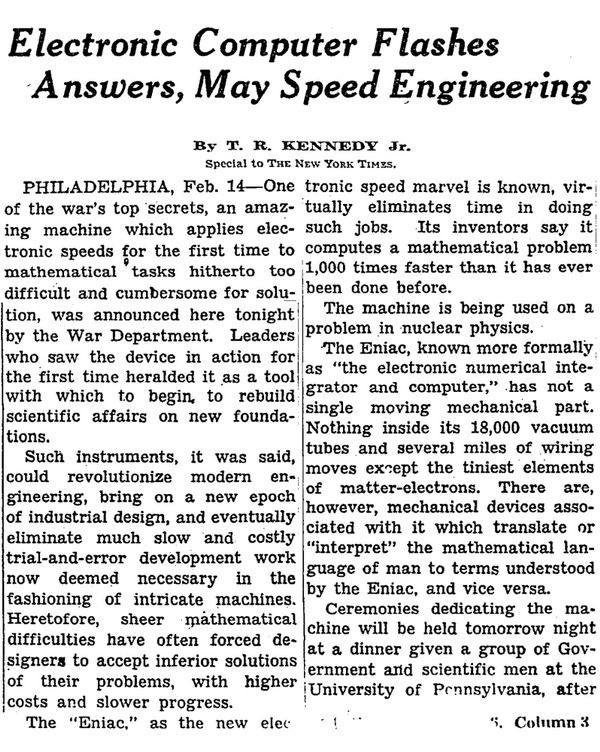 Announcement of ENIAC in the New York Times.

The Naval Ordnance Research Calculator (NORC) designed by IBM went into operation in 1954, becoming the most powerful computer in the world. Build between 1950 and 1954 at Columbia University's Watson Scientific Computing Laboratory, the machine helped forecast weather and performed other complex calculations.

In the late 1950s, the US government began regularly funding the development of cutting-edge, high-performance computer technology for military applications. These events would go on to have a significant influence on the progress of future supercomputers.

In 1951, supercomputer pioneer Seymour Cray joined Engineering Research Associates (ERA), which was later taken over by Remington Rand, Inc. (later merged with other companies to become Unisys Corporation). Cray left with William Norris (ERA’s founder), to begin Control Data Corporation (CDC) in 1957. At that time, Remington Rand’s UNIVAC line of computers and IBM had most of the market for business computers. Rather than compete for business computers, CDC chose to focus on fast, scientific computers.

On October 16th, 1959, CDC released its first model, designed by Seymour Cray—the CDC 1604. One of the first computers to replace vacuum tubes with transistors the CDC 1604 was quite popular in scientific laboratories and found applications in real-time data processing, controlling weapons systems, solving large scientific problems, and commercial applications.

During the early 1960s, a number of new computers specifically designed to be more powerful than the fastest commercial machines became available, and the phrase "supercomputer" came into use.

In 1961, IBM released its own scientific computer, the IBM 7030, commonly known as Stretch. The machine was capable of 2 million operations per second, but found few purchasers due to its tube and transistor hybrid design, and IBM temporarily withdrew from the supercomputer market after losses of $20 million. 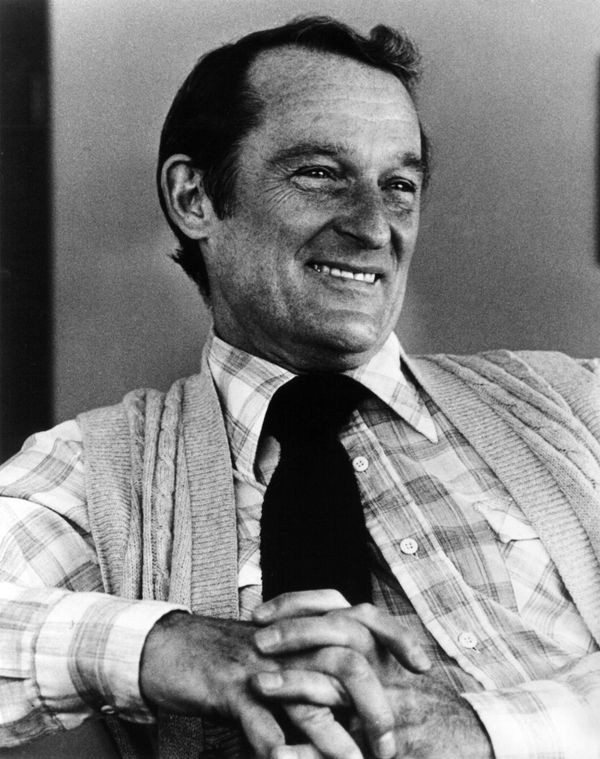 The CDC 6600 was designed by Cray, who was deeply involved in every aspect of creating the computers that his companies built. In particular, he worked on the dense packaging of electronic components that computers require. His designs cut the distances signals had to travel to speed up machines.

The UNIVAC LARC (Livermore Advanced Research Computer) was Remington Rand's first supercomputer. It was delivered to the Lawrence Livermore National Laboratory (then called the University of California Radiation Laboratory) in March of 1960.

The Atlas computer was developed by Tom Kilburn at the University of Manchester, starting in 1956. The machine, completed in 1962, was the first computer to use virtual memory, had the first recognizable modern operating system, impressive RAM (96 KB), and multiprogramming capabilities. Atlas computer at the University of Manchester.

Cray worked on a series of new supercomputers at CDC until he left to start Cray Research, Inc., in 1972. CDC continued producing supercomputers based on his designs. In 1976, Cray Research introduced the Cray-1 machine with the first successful implementation of vector processing.

On June 30th, 1976, Cray Research filed US patent No. 4,128,880 titled "Computer vector register processing," listing Seymour Cray as the sole inventor. The patent was granted on December 5th, 1978. The patent claimed a vector processing apparatus for a computer having a main memory and addressed shortcomings in conventional vector processing machines to enable efficient processing of short, moderate, and long length vectors. For this patent, Cray was posthumously inducted into the National Inventors Hall of Fame in 1997.

Introduced in 1982, the Cray X-MP was of the first machines to use multiprocessing linking two Cray-1 in parallel to triple their individual performance. In 1985, the Cray-2 a four-processor computer, became the first machine capable of over one billion FLOPS. In 1989, Cray left to form a new company, Cray Computer Corporation.

Announced in April 1989, NEC Corporation's SX-3/44R became the fastest supercomputer in the world in 1990. Based on NEC's SX-2 supercomputer from 1983, the SX-3 consists of seven models ranging from 1.4 GFLOPS uniprocessor to maximum performance of 22 GFLOPS quad processor model.

In 1993 the TOP500 project was launched to improve and renew the Mannheim supercomputer statistics. The organization ranks systems using the Linpack benchmark—the ability to solve a set of linear equations using a dense random matrix. Since 1993, TOP500 has published two lists a year (June and November) detailing the fastest supercomputers in the world. A timeline from TOP500 can be found here.

In March 1996, the Hitachi SR2201, a 1,024 processor, achieved 232.4 GFLOPS to become the fastest computer in the world. This was surpassed in June 1997 by the Intel ASCI Red supercomputer, the first teraflop/s computer. During the 90s when vector computers became less important, the US Department of Energy's ASCI (Accelerated Strategic Computing Initiative) program opened new funds with a focus on defense applications. Intel's ASCI Red used the cluster model.

Most modern supercomputers use the cluster model and many incorporate both CPUs and GPUs to work together to perform calculations. The following are the top supercomputer players, in terms of power:

Supercomputer Fugaku became the fastest computer in the world in June 2020, with 442 Pflop/s exceeding the performance of Summit. The system is installed at Riken Center for Computational Science (R-CCS) in Kobe, Japan. Supercomputer Fugaku was co-developed by Riken and Fujitsu and is based on Fujitsu’s custom ARM A64FX processor.

The diagram below shows a timeline of key IBM supercomputers dating back to the Naval Ordnance Research Calculator (NORC) developed in 1954. The TOP500 project is launched to improve and renew the Mannheim supercomputer statistics.

The organization ranks systems using the Linpack benchmark—the ability to solve a set of linear equations using a dense random matrix. Since 1993, TOP500 has published two lists a year (June and November) detailing the fastest supercomputers in the world.

The patent claimed a vector processing apparatus for a computer having a main memory. For this patent, Cray was posthumously inducted into the National Inventors Hall of Fame in 1997.

The CDC 6600 is considered the first successful commercial supercomputer.

A Brief History of Supercomputers

Timeline of the MUSE/Atlas project at Manchester University,