Who is Spike Lee?

Spike Lee is a renowned film director and actor. His films are famous for dealing with controversial issues like racism, politics, and urban violence. Known for his candid portrayal of taboo topics, Spike Lee often lets his films do the talking. He has made many movies, such as ‘School Daze,’ ‘Do the Right Thing,’ and ‘Malcolm X.’ These films not only delivered powerful messages to the audience, but also established him as one of the most respected directors in Hollywood. The son of a teacher and jazz musician, Lee was brought up in a culturally and artistically rich atmosphere. His mother played an important role in kindling his imagination; she often took him to museums, galleries, and plays which instilled in him love for African American literature. As a young man, he realized that he wanted to make films that celebrated the African culture. He made his directorial and acting debut with ‘She's Gotta Have It’ which was a huge success. Since then, he has made numerous movies that explore the greatness of African American culture. He is also the founder of the popular production house ‘40 Acres and a Mule Filmworks’ which has been producing films since 1983. 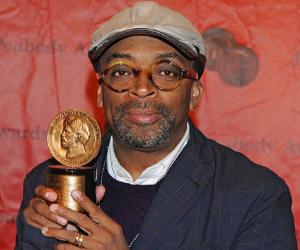 He had submitted the film ‘Joe's Bed-Stuy Barbershop: We Cut Heads’ as his master’s degree thesis at the ‘Tisch School of the Arts’ in 1983. The film became the first student film to be showcased at Lincoln Center’s ‘New Directors New Films Festival.’ It also won a ‘Student Academy Award.’

He started his career as a director-cum-actor with the 1986 comedy drama film ‘She’s Gotta Have It.’ The film also starred Tracy Camilla Johns. The independent film projected African Americans as successful and independent individuals.

In 1988, he wrote, directed, and produced a musical drama titled ‘School Daze’ which was in part based on the director’s own experience at Atlanta’s ‘Morehouse College’ and ‘Clark Atlanta University.’ The movie deals with issues like racism and skin tone bias.

He made a film on African American activist Malcolm X in 1992. The biographical film titled ‘Malcolm X’ had Denzel Washington in the lead role. The screenplay was largely based on Alex Haley’s book ‘The Autobiography of Malcom X.’

The year 1995 was a very productive one for Spike. He produced and directed several movies, including ‘Clockers,’ ‘New Jersey Drive,’ and ‘Tales from the Hood.’

He directed the historical documentary film ‘4 Little Girls’ in 1997. The film was about the murder of four African-American girls in the Baptist Church bombing in September 1963. The movie was nominated for an ‘Academy Award’ for ‘Best Documentary.’

In 2000, he wrote and directed a satirical comedy-drama film titled ‘Bamboozled.’ Though the film bombed at the box office, it later achieved cult film status. Other films that he produced during the year were ‘The Original Kings of Comedy’ and ‘Love & Basketball.’

He directed a documentary film titled ‘When the Levees Broke: A Requiem in Four Acts’ in 2006. It was about the devastation of New Orleans when the levees failed during Hurricane Katrina.

Some of his other movies in the early-2010s include ‘Pariah’ (2011) and ‘Bad 25’ (2012). In addition to films, he has also directed various commercials and a number of music videos for artists like Michael Jackson and Prince.

In 2017, Netflix aired the show ‘She’s Gotta Have It,’ which was based on the 1986 movie of the same name. The show successfully ran for two seasons. The same year, he directed the one man show ‘Rodney King.’

The following year, he directed, co-wrote, and co-produced the biographical crime film ‘BlacKkKlansman.’ Starring John David Washington in the lead role, the film revolves around the first African-American detective who sets out to expose the white supremacist hate group ‘Ku Klux Klan.’ The movie is based on Ron Stallworth’s memoir ‘Black Klansman.’

Lee director the hit film Inside Man
His most recent feature film release, Miracle at St. Anna (2008), tells the story of four African American soldiers trapped in an Italian village during World War II
Lee filmed When the Levees Broke: A Requiem in Four Acts
Spike Lee filmed the movie Do The Right Thing in 1989
Lee directored his first feature film, She's Gotta Have It
Spike Lee went on to graduate from the New York University Film School
Lee filmed the movie 4 Little Girls, a piece about the 1963 16th Street Baptist Church bombing
Spike Lee was born in Atlanta.

Who is Spike Lee? Everything You Need to Know

Who is Spike Lee? Everything You Need to Know

All the Invisible Children
‌
Tom and Jerry: Willy Wonka and the Chocolate Factory
Known for
his uncompromising provocative approach to controversial subject matter
Location