Who is Samuel L. Jackson?

Samuel L. Jackson is one of the most illustrious Hollywood actors and has appeared in more than 100 films in his career. Abandoned by his father when he was a child, Jackson left behind a difficult childhood to become one of the most successful Hollywood stars. Though he suffered from stuttering, with determination and hard work, he went on to pursue a career in acting. His career began with small roles in films like ‘Goodfellas.’ Eventually, he started hogging the limelight and earned more prominent roles in movies like ‘Jungle Fever,’ ‘Patriot Games,’ ‘True Romance,’ ‘Jurassic Park,’ and ‘Pulp Fiction.’ Since then, he has received several nominations and awards for his roles in films. Apart from his acting career, he was also involved in the ‘Civil Rights Movement’ and was politically active when he campaigned during the 2008 Democratic presidential primaries for the-then Senator Barack Obama. As a humanitarian, he started his own charity organization called ‘Prizeo’ as part of a campaign to raise money to fight Alzheimer’s disease. Jackson is known for his characteristic ‘Kangol’ hats and ‘tough nut’ roles in films. He is one of the highest-grossing film actors of all time. Besides being an actor, he is also an accomplished musician and can play bass instruments. 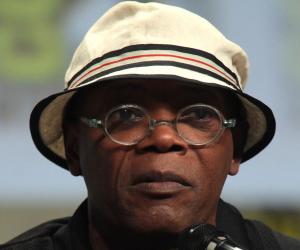 After appearing in several plays, including ‘The Threepenny Opera’ and ‘A Soldier’s Play,’ he made his motion picture debut in the blaxploitation film ‘Together for Days’ in 1972. Four years later, he appeared in the television series ‘Movin’ On.’

He moved to New York City and spent the next several years appearing in stage plays, such as ‘The Piano Lesson’ and ‘Two Trains Running.’ In 1977, he appeared in the film ‘The Displaced Person.’

It is believed that in his early years he was mentored by Morgan Freeman. Later on in his career, he started doing noticeable roles in films like ‘School Daze’ and ‘Do the Right Thing,’ which released in 1988 and 1989, respectively.

In 1990, he appeared in ‘Goodfellas’ in a minor role and then worked as a substitute on ‘The Cosby Show’ for the next three years.

In 1994, he played the critically-acclaimed role of Jules Winnfield in the hit film ‘Pulp Fiction.’ Jackson became a world icon after the release and subsequent success of the movie. It was later revealed that director Quentin Tarantino specifically wanted him for the role.

From 1995 to 1996, he appeared in a string of box office flops, such as ‘Kiss of Death,’ ‘Losing Isaiah,’ and ‘The Great White Hype.’ However, he quickly bounced back by appearing in hit films like ‘Die Hard with a Vengeance’ (1995) and ‘A Time to Kill’ (1996), which once again established him as a bankable star.

In 1997, he played the role of Trevor Garfield in ‘One Eight Seven’ and then starred in other films like ‘Eve’s Bayou’ and ‘Jackie Brown.’ The same year, he also voiced a character in one of the episodes of a television series titled ‘Happily Ever After: Fairy Tales for Every Child.’

In 1999, he starred in ‘Deep Blue Sea’ and ‘Star Wars: Episode I – The Phantom Menace.’ At the beginning of the new millennium, Jackson became part of successful films, including ‘Rules of Engagement,’ ‘Shaft,’ and ‘Unbreakable.’

In 2006, he was cast opposite Julianne Moore in ‘Freedomland.’ The same year, he appeared in one of the biggest offbeat films of the year, ‘Snakes on a Plane.’ To build anticipation for the film, he was cast in the promotional music video of the movie. Towards the end of the year, he appeared in ‘Home of the Brave’ where he played the role of a doctor.

In 2007, he was cast as a narrator in the direct-to-video film ‘Farce of the Penguins.’ He also played the role of a former cop in ‘Cleaner’ and a hotel manager in the psychological horror film ‘1408,’ displaying his versatility as an actor.

From 2008 to 2011, he was seen in different genres of films, such as ‘Iron Man,’ ‘Star Wars: The Clone Wars,’ ‘Soul Men,’ ‘Gospel Hill,’ ‘Inglourious Basterds,’ ‘Unthinkable,’ ‘Iron Man 2,’ ‘African Cats,’ ‘Captain America: The First Avenger,’ and ‘Arena.’ He was also seen in television series like ‘Curiosity,’ ‘Prohibition,’ and ‘The Sunset Limited.’

One of his greatest hits in the year 2012 was the Quentin Tarantino film ‘Django Unchained’ where he played the role of Stephen. The next year, he voiced a character named Whiplash in the animated sports film ‘Turbo.’

From 2013 to 2014, he appeared as Nick Fury in the popular television series ‘Agents of S.H.I.E.L.D.’ In 2014, he appeared in the films, ‘Reasonable Doubt,’ ‘RoboCop,’ ‘Captain America: The Winter Soldier,’ and ‘Kite.’ In the same year, he also played the lead villain in the action spy comedy film ‘Kingsman: The Secret Service.’

Jackson reprised his role as Nick Fury in the ‘Avengers’ sequels, ‘Infinity War’ and ‘Endgame.’ He also starred as a younger, de-aged Fury in ‘Captain Marvel.’

Jackson appeared in Jordan Vogt-Roberts' monster film ‘Kong: Skull Island,’ which was released in 2017. In 2019, Jackson reprised his roles as Mr. Glass and John Shaft II in ‘Glass’ and ‘Shaft,’ respectively. Both ‘Glass’ and ‘Shaft’ were sequels to his 2000 films ‘Unbreakable’ and ‘Shaft.’ Also in 2019, he appeared in the Brie Larson-directed film ‘Unicorn Store’ and reprised his role as Nick Fury in the ‘Marvel’ film ‘Spider-Man: Far From Home.’

Who is Samuel L. Jackson? Everything You Need to Know

Who is Samuel L. Jackson? Everything You Need to Know

Washington, D.C.
Nationality
Director of (Film)
‌
Irina Palm
Known for
American actor. One of the most widely recognized actors of his generation, the films in which he has appeared have collectively grossed over $27 billion worldwide, making him the highest-grossing actor of all time (excluding cameo appearances and voice roles)
Educated at