Product integraph is a mechanical analog computer for solving first-order differential equations, created by Vannevar Bush and Herbert R Stewart in 1925 at MIT.

The product integraph is a machine for solving differential equations by measuring the area under a curve. The device was first invented by Vannevar Bush and one of his graduate students, Herbert R Stewart, in 1925 at the Massachusetts Institute of Technology (MIT). The product integraph consists of a modified watt-hour meter (commonly used to measure electricity use in homes) attached to a pen that automatically recorded the curve.

Other people closely associated with Bush in developing the product integraph include Frank D Gage, Harold L Hazen, King E Gould, and Samuel H Caldwell. While not direct ancestors of modern digital computers, the product integraph was the first of a series of analog computers that led to the opening of the modern field of computation. 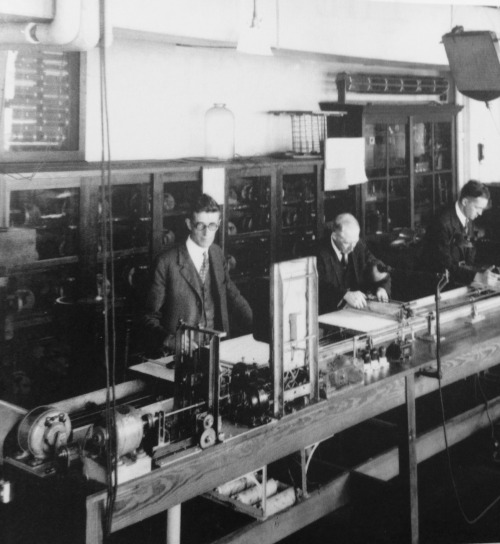 In the early 20th century, instruments for integrating functions mechanically, known as integraphs, were available. After World War I, electrical engineers had difficulty performing the long and repetitive calculations required to solve differential equations for their work on vacuum-tube circuitry, telephone lines, and, particularly, long-distance power transmission lines. Two of the steps required to solve them were the manual drawing of a graph then determining the area under the curve.

In 1925, Vannevar Bush, in the Electrical Engineering Department at MIT, suggested that one of his graduate students, Herbert R Stewart, work on a machine to determine the area under the curve. Bush was looking for an alternative to using simulations based on miniature power networks and wanted to pursue direct methods for solving network equations. His approach was based on John Carson's work on transients in electrical networks. Applying Carson's methodology to network equations meant lengthy calculations evaluating convolution integrals of the general form:

Regarding his thesis developing the product integraph, Stewart stated:

It was Dr. Bush's suggestion early in 1925 that a mechanical device should be developed to perform the continuous integration, which was the beginning of a continually expanding program of general solution of transients in networks by electromechanical means.

While mechanical integrators were already in use, they evaluated the definite integral between the fixed limits provided. Bush and Stewart's device continuously evaluated and plotted the integral as a function of a variable upper limit. The machine used a process described as "back coupling" to also solve differential equations. Back coupling was an idea developed by another of Bush's graduate students, King E Gould, who would go on to use the product integraph to investigate the temperature distribution of a thermionically emitting filament.

In 1927, Bush stated his opinion that engineering required calculating machines to progress:

Engineering can proceed no faster than the mathematical analysis on which it is based. Formal mathematics is frequently inadequate for numerous problems pressing for solution, and in the absence of radically new mathematics, a mechanical solution offers the most promising and powerful attack wherever a solution in graphical form is adequate for the purpose. This is usually the case in engineering problems.

Integraphs are instruments that draw integrals, finding the area between the curve and a given straight line. Two integraphs were invented independently in the late 19th century by British physicist Sir Charles Vernon Boys and the Lithuanian mathematician Bruno Abdank Abakanowicz. As the user traces the graph for a given function, the integraph draws the graph of the integral.

A similar group of devices, known as integrators, also calculated the area under a curve. However, these machines only provided outputs on a dial rather than drawing the integral. Integrators were incorporated into more general computing devices including those made by the Ford Instrument Company for the US Navy.

The design of the product integraph used modified forms of standard electrical apparatus. Bush and Stewart first considered a mechanical device, but later decided to seek an electrical solution. The integraph unit of the larger device consists of a Thomson watthour meter housed in a box with a gear train underneath that has a crank at the rear. Bush and Stewart refined the meter and linked it to a pen that automatically recorded the curve using a moving table. Both the functions and the integral of the product were drawn on sheets of paper.

Errors using the product integraph were reduced to an average of 1 percent for common uses. Cross-connecting the device in a simple mechanical way allowed it to solve certain types of integral equations. Link motion allowed it to plot the product of two given functions. Uses of the instrument included solving problems related to electrical circuits, continuous beams, and specific problems involving integral equations.

The product integraph drew two known functions f1(x) and f2(x) using a table moving at a constant speed, as shown below.

Input and output table for the product integraph.

The graphs produced were arranged such that the x-axes of both were parallel to the movement of the table. Center-tapped potentiometers were positioned at A and B and operators moved pointers attached to the slides of the potentiometer along the plotted curves. The outputs from these potentiometers were fed to the modified Thomson watt-hour meter with the integral of the product of the two functions given by the rotation of the meter. This controlled a pen located at C that continuously recorded the value of the integral.

Accurate output from the device depended on many factors:

The integraph unit, a part of the product integraph used by Bush and his colleagues at MIT, was donated to the National Museum of American History, Smithsonian Institution, with a large collection of electrical apparatus. The unit has a nameplate reading: 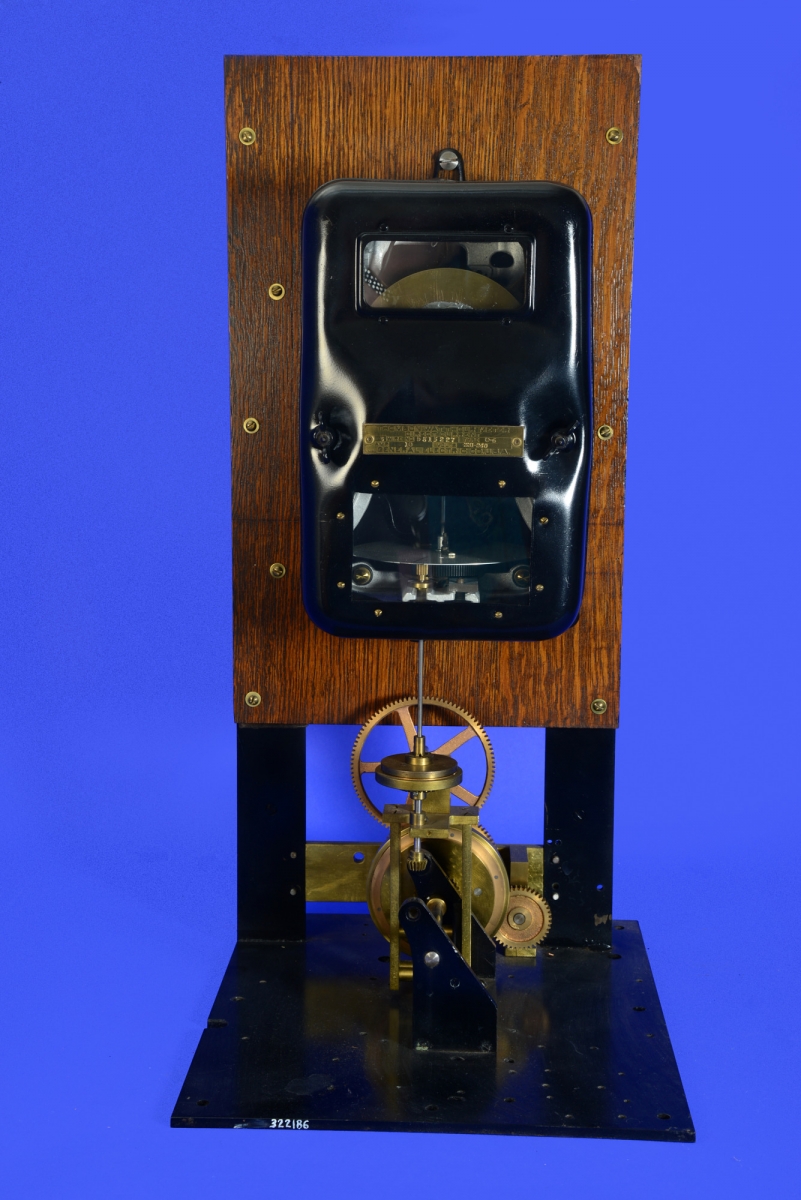 Integraph unit of the product integraph used by Bush and colleagues at MIT, now at the Smithsonian Institute.

The original product integraph used an electrical solution to solve mathematical problems. The revised two-stage version added a mechanical integrator and expanded the machine's use. However, Bush thought developing an entirely mechanical integrator (rather than a hybrid) could allow for further use as a calculating machine.

In 1928, Bush received funding from MIT to develop his entirely mechanical integrator, completing the differential analyzer in 1931. The machine consists of multiple interconnected shafts on a long, table-like framework. Drawing boards were positioned on one side with six wheel-and-disk integrators (based on Hazen's design) on the other side. The drawing boards allowed an operator to trace a curve with a pen providing the input to the machine, with other drawing boards configured to receive the output from the analyzer, drawing the curves produced. 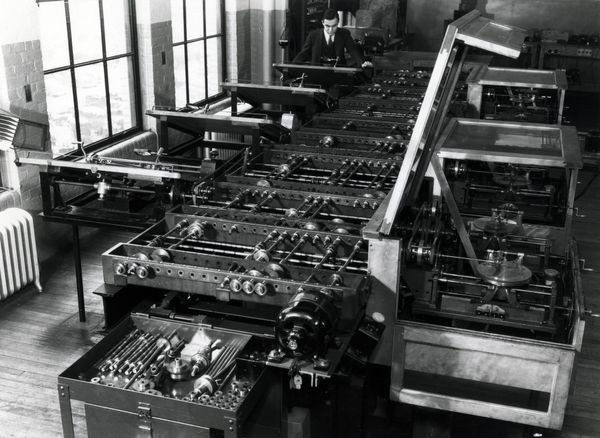 The differential analyzer in 1930 at MIT.

Other devices capable of adding, subtracting, multiplying, and dividing were linked to the integrators allowing the differential analyzer to solve complex equations involving many mathematical operations. An analog computer, the machine was entirely mechanical acting out each calculation.

Although each new problem required Bush's team to set up a series of new mechanical linkages, the differential analyzer was widely used by students and researchers at MIT for doctoral dissertations and masters and bachelors theses.

Hazen, an MIT faculty member, modified the machine by adding a mechanical integrator.

Developed at MIT, the product integraph machine determined the area under a curve using a watt-hour meter.