The Order of Ushakov is a Soviet naval award during the Great Patriotic War.

The Order of Ushakov is a military decoration of the Russian Federation named in honour of admiral Fyodor Ushakov (1744–1817) who never lost a battle and was proclaimed patron saint of the Russian Navy. It is bestowed to command grade naval officers for outstanding leadership. The order was established in two classes during World War II by decision of the Presidium of the Supreme Soviet of the USSR of March 3, 1944. The idea was given to Joseph Stalin by admiral Nikolai Gerasimovich Kuznetsov in the summer of 1943. Following the 1991 dissolution of the USSR, the Order of Ushakov was retained unchanged by Decision of the Supreme Soviet of the Russian Federation 2557-I of March 20, 1992 but it was not awarded in this form. The all encompassing Presidential Decree 1099 of September 7, 2010 that modernised and reorganised the entire Russian awards system away from its Soviet past amended the Order to its present form, a ribbon mounted single class Order. 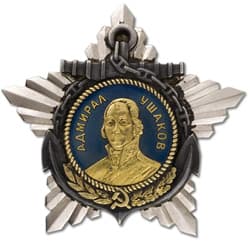 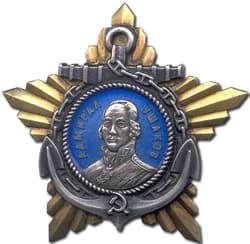