Novosibirsk was founded in 1893 on the Ob River crossing point of the future Trans-Siberian Railway, where the Novosibirsk Rail Bridge was constructed. Originally named Novonikolayevsk, the city grew rapidly into a major transport, commercial, and industrial hub. The city was ravaged by the Russian Civil War but recovered during the early Soviet period, and gained its present name in 1926. Under the leadership of Joseph Stalin, Novosibirsk became one of the largest industrial centers of Siberia. Following the outbreak of World War II, the city hosted many factories relocated from the Russian core.

Novosibirsk is home to the headquarters of numerous Russian corporations, the neo-Byzantine Alexander Nevsky Cathedral, the Novosibirsk Opera and Ballet Theatre, as well as the world-renowned Novosibirsk Zoo. It is served by Tolmachevo Airport, the busiest airport in Siberia. https://en.wikipedia.org/wiki/Novosibirsk

Novosibirsk is situated at the junction of the forest-steppe and forest natural zones, on the Priobsk plateau, adjacent to the Ob river valley, and at the intersection of key transportation corridors, traditionally used for economic connections between Russian regions, both in the east-west direction (M-51 Baikal federal highway) and in the north-south direction (M-52 Chuisky Tract federal highway and navigable Ob River). The distance from Novosibirsk to Moscow is 3,191 km.

The natural conditions in the area are favorable for the city's development. The natural forest areas, Ob water-storage basin, and small rivers and lakes which lie adjacent to the city together form a diverse complex of recreational resources.

Novosibirsk was originally established in 1893 as a settlement for builders working on the railway bridge across the Ob River. The impetus for its development was the construction of the Trans-Siberian Railway.

In less than 70 years, Novosibirsk’s population reached over a million. It remains the fastest growing city in the world to this day, for which it has been included in the Guinness Book of Records.

Novosibirsk is the center of the Novosibirsk Agglomeration, which incorporates settlements that are economically, socially, and territorially interrelated with Novosibirsk and located up to an hour and a half away from its downtown district. The agglomeration’s population exceeds 2 million and accounts for more than three-quarters of the Gross Regional Product of the Novosibirsk Region. It also sets virtually all development trends of the regional economy. The following settlements are part of the agglomeration in the economic sense: cities of regional significance-Berdsk and Ob, urban-type settlements-Koltsovo and Krasnoobsk, the Novosibirsk rural district, as well as a number of other regional districts adjacent to Novosibirsk, including Ordynsky, Toguchinsky, Iskitimsky, Kolyvansky, and others.

The social aspect of the Novosibirsk Urban Agglomeration settlements’ interaction is characterized by low territorial segmentation of the labor market and by objective trends of a single labor market formation in adjacent territories. In this regard, a significant role is played by the commuting that takes place between the regional center and the agglomeration settlements due to labor relations as well as cultural, trade, educational, and other connections. Through commuting, Novosibirsk’s population daily increases by at least 80 to 100 thousand people.

There are people of over 120 nationalities residing in Novosibirsk, with Russians accounting for most of the population (around 93%). The largest ethnic groups are Ukranian, Uzbec, Tatar, German, and Tajic. In addition, the city is home to Armenians, Kyrgyz, Azerbaijanis, Belarusians, Kazakhs, Koreans, Yezidis, Jews, Chinese, Gypsies, Tuva, Buryatia, Chuvash, Georgians and representatives of other nationalities. The city has over forty registered national and cultural organizations.

The political situation in the city is stable. The municipal government authorities operate in close cooperation with the city’s business community and the general public. 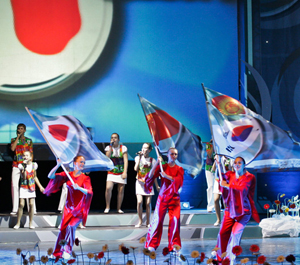 There are numerous representative offices and economic missions of foreign states operating in the city, including the Consulates General of Germany, Uzbekistan, and Ukraine, the Vice-Consulate of Kirghizia, the Embassy Department of the Republic of Belarus, Commercial Section of the Embassy of the Republic of Korea, Novosibirsk Department of the Institute for Foreign Trade under the auspices of the Italian Embassy in the RF (ICE), as well as visa application centers of most European Union member states. Over 80 thousand foreign citizens visit Novosibirsk annually for business and personal purposes, and this number grows every year.

The city has established and is actively developing economic and cultural relations with China, Japan, South Korea and other countries, as well as with the following sister cities: Minneapolis and Saint Paul in the USA, Sapporo in Japan, Mianyang and Shenyang in China, Daejeon in the Republic of Korea, Varna in the Republic of Bulgaria, Osh in the Kyrgyz Republic, Kharkov in the Ukraine, Minsk in Belarus, Yerevan in Armenia and Sevastopol in Russia.

There are several dozen foreign companies’ representative offices accredited and operating in Novosibirsk.

Novosibirsk’s economy is based on industry, trade, services, transport, construction, science, and scientific services. The city is undergoing successful development despite the absence of large resource-extraction enterprises in the region, making it unique among most large Siberian cities.

Novosibirsk’s industrial complex is targeted at processing and science-intensive industries. The key industrial branches include the aircraft industry, nuclear industry, engineering industry, power industry, metal working, and pharmaceutics. Novosibirsk is currently one of the leading suppliers of nuclear fuel to the world power markets.

Novosibirsk is the largest transport hub in Western Siberia, situated at the intersection of major traffic arteries, including the Trans-Siberian Railway. It also has railway access to Central Asia.

The city has four railway stations, including Novosibirsk-Glavny — the largest station east of the Urals. Novosibirsk accommodates the largest Russian sorting depot where a record number of cargoes may be received and handled.

Airlines link Novosibirsk to more than 80 cities in Russia and worldwide. Tolmachevo Airport, being one of largest airports in the country and the largest airport in Siberia is located in the Urban Agglomeration (17 km from Novosibirsk’s center, in the territory of Ob City, Novosibirsk Region). Tolmachevo Airport’s technical facilities enable it to service all types of modern passenger and cargo aircraft of domestic and foreign manufacture. This high-class airport provides a dynamic link between our city and the world’s largest megacities, making it convenient to hold international business trips and tourist visits.

Novosibirsk’s subway, being the first and only subway in the eastern part of the country, was opened at the end of 1985. Currently, it has two active lines with 13 stations and a total length of 15.9 km. The metro bridge is the longest of its kind in the world.

Novosibirsk as a "Smart City" | Kostina | World of Economics and Management

Title
Author
Date
Publisher
Description
Where Siberian orchids thrive: New hotspot of orchids discovered near Novosibirsk
Science X staff
April 8, 2021
phys.org
Orchids of the Boreal zone are rare species. Most of the 28,000 species of the Orchid family actually live in the tropics. In the Boreal zone, ground orchids can hardly tolerate competition from other plants--mainly forbs or grasses. So they are often pushed into ecotones--border areas between meadows and forests, or between forests and swamps.
Damn: Lighting Strikes Car Twice Back-To-Back
Invalid Date
Geekologie
This is some dashcam footage from Novosibirsk, Russia of a car getting struck by lightning twice in row, proving the old adage that lightning never strikes the same place twice a dirty lie. What's next, two wrongs making a...