State of the United States of America

* The official name of the state is State of New Jersey

* The height of the relief of the state above sea level:

* The state capital is Trenton

* The largest city in the state is Newark.

* The state motto is Liberty and prosperity

On the lands of the modern state of New Jersey, before the arrival of European colonists in North America, the Indians of the Lenape (Delaware) people lived. Their main occupations were hunting, fishing and gathering;  they also farmed, growing corn and beans. The first European on the coast of modern New Jersey at the beginning of the 16th century was the Italian navigator Giovanni da Verrazano. In 1609, the famous Englishman Henry Hudson explored this region.  In the twenties of the XVII century, the first trading posts and forts on the lands of New Jersey were founded by the Dutch. In 1664, the colony of New Holland was captured by the British.

Very important to the economic prosperity of New Jersey is its geographic location, the state is often called the "crossroads of the US East."  The extremely developed transportation system of the state, which includes numerous airports, roads, bridges, tunnels, ports, ferries, a network of railway lines, provides daily transportation of millions of people and a huge amount of goods.

Sometimes the state is also called a "bedroom suburb", because a significant part of the population of New Jersey work in the metropolitan areas of New York and Philadelphia. But New Jersey is not only the "bedroom" and "carrier" of the Northeast of the United States; industry and agriculture are well developed in the state.

The main agricultural crops of the state are various vegetables (including tomatoes and potatoes), fruits and berries.  New Jersey ranks second among the US states in terms of production of blueberries, the third - cranberries and spinach, the fourth - sweet ("Bulgarian") peppers and head lettuce.

New Jersey is known as the "Garden State" and is famous for its peaches. Agricultural farms are mainly concentrated in the inner (fruits and vegetables) and outer (berries) coastal plains. Ever since the 1870s, when famed inventor Thomas Edison set up a research lab in New Jersey, the state has been a leader in industrial research.  It was in New Jersey that color television, VCRs, and LCD screens were invented. Not surprisingly, even today, many companies in the state are focused on one or another high-tech and innovative industries, and a number of research organizations are located in the Princeton University area.

New Jersey is one of the largest centers of the pharmaceutical industry; such major manufacturers of medicines and medical products as Johnson and Johnson, Sanofi-Aventis, Pfizer and others work here.

The state is home to the headquarters of several of the world's telecommunications industry leaders, including AT&T Communications, Verizon, and Avaya.

Tourism is very important to the state's economy. New Jersey's mild climate, numerous natural attractions (including one of the most popular US tourist attractions, the Delaware Valley National Recreation Area located on the border with Pennsylvania), and the sandy beaches of the Atlantic Ocean and Long Beach Island attract millions of vacationers every year.

Interesting for tourists and numerous theme parks and attractions of the state. For example, Six Flags' Big Adventure Park has the highest (139 meters!) and second fastest roller coaster in the world.

Along the coast of New Jersey stretches a number of resort towns and villages, the most famous of which is Atlantic City.  It was here that the first casino in the east of the United States was opened in 1978. Since then, many gamblers prefer New Jersey to Nevada and Las Vegas. 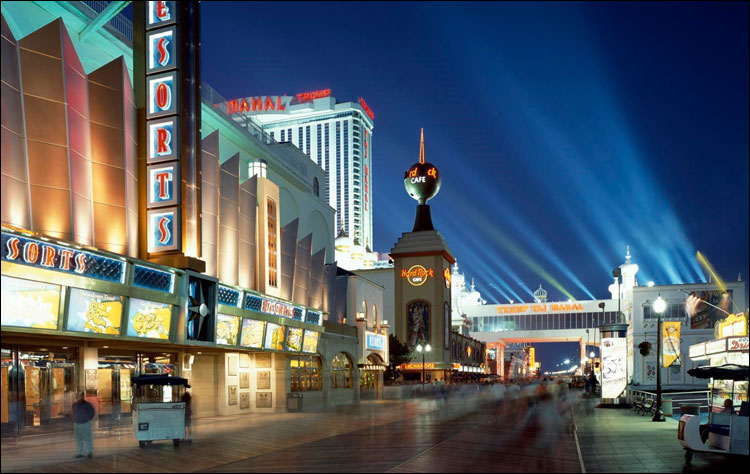