Microgrids are local self-sufficient energy systems that can disconnect from the traditional grid and operate autonomously.

A microgrid is a local self-sufficient energy system that can disconnect from the traditional grid and operate autonomously. Microgrids are powered by one or more types of distributed energy (solar panels, wind turbines, combined heat and power, generators). Any small-scale, localized power station with its own generation and storage resources and definable boundaries can be considered a microgrid. If the microgrid can be integrated with the area's main power grid, it is often referred to as a hybrid microgrid. Typical locations utilizing microgrids include college campuses, hospital complexes, business centers, neighborhoods, and military facilities.

The electrical grid connects homes, businesses, and other buildings to central power sources, allowing them to use appliances, heating/cooling systems, and electronics. The interconnectedness of the electrical grid means a large number of people can be affected during repairs. A microgrid allows facilities to operate on their own using local energy generation. This is especially useful during times of crisis, such as storms and power outages.

Often Microgrids are used to provide backup power or supplement the main power grid during periods of heavy demand. Buildings equipped with their own electric generation capabilities, such as solar panels and contingency generators, can also generate revenue during downtime. With smart grid deployments, excess energy can be sold back to local microgrids to create revenue and provide resilience and capacity to local electrical grids.

Microgrids are made up of many components in order to generate electricity and provide an equal electric load. The following are the primary microgrid components:

Microgrids require many other critical components to connect consumers to the grid. These include electrical cables, circuit breakers, transformers, inverters, and more. Many microgrids also incorporate load management systems to manage electricity demand. 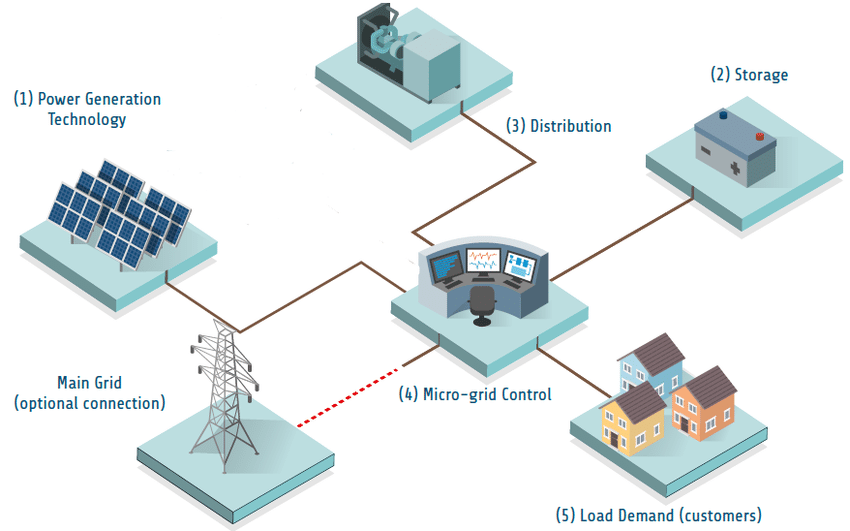 Diagram showing the components of a microgrid.

Microgrids have applications for a variety of location and facility requirements:

Major players shaping the future of the microgrid industry include the following:

In its new climate strategy, the US Army announces plans to install a microgrid at all of its installations by 2035.
The Bipartisan Infrastructure Deal is signed offering new funding opportunities for microgrids.

The bill provides $50 billion for programs and technologies that improve resilience and $65 billion for grid improvements.

Title
Author
Date
Publisher
Description
Urgent Need for New Stationary Storage, Reveals IDTechEx
IDTechEx
May 24, 2021
www.prnewswire.com:443
/PRNewswire/ -- Starved of lithium-ion batteries and pumped storage sites, the stationary energy storage business is urgently looking for alternatives. See...
US Department of Defense Selects XENDEE for Standardized Design Platform of Resilient Microgrids
BioSpace
May 26, 2020
BioSpace
XENDEE Corporation has signed a contract with the US Department of Defense (DoD) to develop the Standardized Platform to Guide Rapid and Repeatable Modelling and Design of Secure and Resilient DoD Microgrids globally. XENDEE has been tasked to deliver design solutions that enhance energy reliability, while providing new services such as the ability to safely ride-out prolonged utility power outages and sustain mission critica