A melonpan (メロンパン, meronpan) (also known as melon pan, melon bun or melon bread) is a type of sweet bun from Japan, made from an enriched dough covered in a thin layer of crisp cookie dough. Their appearance resembles a melon, such as a rock melon (cantaloupe).

Melonpan is not traditionally melon flavored, but adding the flavor has become popular. Variations exist, including some with a few chocolate chips between the cookie layer and the enriched dough layer, and non-melon versions flavored with caramel, maple syrup, chocolate, or other flavors, sometimes with syrup, whipped or flavored cream, or custard as a filling. In the case of such variations, the name may drop the word "melon" ("maple pan") or may keep it despite the lack of melon flavor ("chocolate melon pan").

Why it is called melonpan is slightly unclear. The name has a bilingual etymology, since melon is a loan word from English, while pan is from the Portuguese word for bread. In parts of the Kinki, Chūgoku, and Shikoku regions a variation with a radiating line pattern is called "sunrise", and many residents of these regions call even the cross-hatched melon pan "sunrise".

One theory is that it is called melonpan because the cookie crust topping that resembles a musk melon rind. Musk melons were luxury fruits in the first part of the 20th century in Japan. By making bread that looked like these expensive fruits, bakers could make bread with a luxury image. 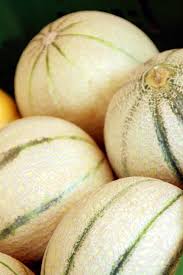 There is another theory that melon pan is actually named after meringue and the Japanese for meringue (メレンゲ or merenge) became “meron” or “melon.”

Similarities to other sweet breads

Melonpan and pineapple bun from Hong Kong are very similar. By comparison the Japanese style is lighter in weight and taste, slightly drier and has a firmer outer layer (including top cookie crust) which resists flaking unlike its Hong Kong counterpart, which should be treated with care as the top cookie crust tends to flake easily. The Hong Kong version is also moister and is generally soft on the outside and inside and has a stronger butter flavour.

It is also similar to pan dulce and conchas. All share some sort of cookie crust topping.

The exact origins of melon pan are unclear.

One story says melon pan was invented in 1910 after Japanese businessman Okura Kihachiro brought an Armenian baker named Sagoyan to Japan, where he apparently made the bread, originally basing it on a French galette. Sagoyan had previously worked for the Romanovs and at the Imperial Hotel in Manchuria.

Melon pan has its roots in what’s called kashi pan in Japanese, meaning “sweets bread.” Kashi pan really started in 1874 when a Tokyo baker named Kimura Yasube came up with anpan, a bread stuffed with sweet adzuki bean paste (an).