Kharkiv is the second-largest city and municipality in Ukraine. Located in the northeast of the country, it is the largest city of the historic Slobozhanshchyna region. Kharkiv is the administrative centre of Kharkiv Oblast and of the surrounding Kharkiv Raion. The latest population is 1,433,886 (2021 est.). The area of the city is 350 km2, the density is 4,500/km2.

It lies at the confluence of the Uda, Lopan, and Kharkiv rivers. It was founded about 1655 as a military stronghold to protect Russia’s southern borderlands; part of the old kremlin wall survives. The centre of a region of fertile soils and rapid colonization in the 18th century, it quickly developed important trade and handicraft manufactures and became a seat of provincial government in 1732. Its nodal position was enhanced in the later 19th century by the opening of the adjacent Donets Basin coalfield, first reached by rail from Kharkiv in 1869. At that period Kharkiv’s own industries, especially engineering, grew rapidly. After the Russian Revolution of 1917, Kharkiv was made the first capital of the Ukrainian S.S.R. but lost this function to Kiev in 1934. In World War II this key junction was bitterly contested and changed hands several times, with very heavy destruction.

The Kharkiv Fortress was erected around the Assumption Cathedral and its castle was at University Hill. It was between today's streets: vulytsia Kvitky-Osnovianenko, Constitution Square, Rose Luxemburg Square, Proletarian Square, and Cathedral Descent. The fortress had 10 towers: Chuhuivska Tower, Moskovska Tower, Vestovska Tower, Tainytska Tower, Lopanska Corner Tower, Kharkivska Corner Tower and others. The tallest was Vestovska, some 16 metres (52 ft) tall, while the shortest one was Tainytska which had a secret well 35 metres (115 ft) deep. The fortress had the Lopanski Gates.

In 1689 the fortress was expanded to include the Intercession Cathedral and Monastery, which became a seat of a local church hierarch, the Protopope. Coincidentally in the same year in the vicinity of Kharkiv in Kolomak, Ivan Mazepa was announced the Hetman of Ukraine. Kharkiv leading educational institution, the Collegium, was located next to the Intercession Cathedral. It was transferred from Bilhorod to Kharkiv in 1726. 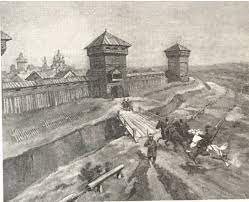