The hryvnia, hryvna, or sometimes gryvnya (/(hə)ˈrɪvniə/ (hə-)RIV-nee-ə; Ukrainian: гривня [ˈɦrɪu̯nʲɐ] (audio speaker iconlisten), abbr.: грн hrn; sign: ₴; code: UAH), has been the national currency of Ukraine since 2 September 1996. The hryvnia is subdivided into 100 kopiyok. It is named after a measure of weight used in medieval Kyivan Rus'.

Currency in Ukraine, much like many other things in the country, has a long and complex history. The first coins of Kyiv Rus became banknotes soon to be replaced by coupons. So what really is the history of the currency of Ukraine?

While many people use UAH abbreviation or even the ₴ sign, not every one of them knows what the currency of Ukraine is really called and why. Hryvnia comes from the similar-sounding Old East Slavic "Hryvna" - a necklace made of gold or silver. In its turn, the jewelry is worn on the neck, "hryva" in Old East Slavic, which gives a complete etymological insight.

The first written mentions of Hryvnia as a currency, like many things in Ukraine, dates back to the Primary Chronicle by Nestor the Chronicler. The historical source proves that in the 8-9th centuries, Kyiv Rus already had its official currency. Since then, Hryvnia has transformed numerous times to become what we are familiar with nowadays.

In the 11th century, Hryvnia was used as a monetary unit in Kyiv Rus and was made from gold. According to the Primary Chronicle, 300 Hryvnias per year was the 'Novgorod tax' established by Oleg of Novgorod who ruled in Kyiv at the time. The monetary unit was called "Hryvnia Kun" and in different periods of time equaled a different number of coins called nogat, kun, rizan and vyveryts. As a monetary and weight unit, Hryvnia stayed the permanent way of payment for many centuries.

The ‘weight Hryvnia’ changed depending on the weight of the kun coins it equaled to. The ‘monetary Hryvnia’ didn't suffer any changes and was minted in various regions. All in all, historians talk about several Hryvnia types: Kyiv, Novgorod, Chernigiv, Tatar and Lithuanian.

Other coins minted by Rus princes weren’t called Hryvnia, yet possess historical importance, as they were the first governmental documents to be depicted with a Ukrainian symbol - trident. Minting national currency was founded by Volodymyr the Great. Historians link this event with Volodymyr's victory over Byzantine, adopting Christianity and the political strength of Kyiv Rus. 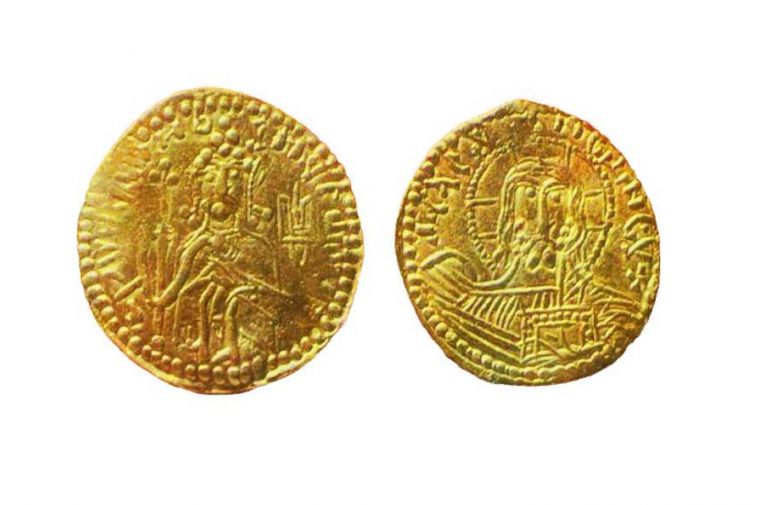 The minted coins introduced by Volodymyr the Great corresponded the Byzantine tradition of coinage. Many countries of Western Europe copied the design of Roman coins when they were adopting the minting. Kyiv Rus coins, on the contrary, had unique portraits of princes and Old East Slavic inscriptions. The exact names of the coins weren't preserved, but in numismatics, they are commonly called "zlantyk" and "sriblianyk", deriving from gold and silver accordingly.

The averse of the coin depicts the prince, who sits on the throne, a trident and the inscription - "Volodymyr on the table". The reverse side depicts Jesus Christ and the inscription "And this is his gold". The tradition of minting coins was continued by Yaroslav the Wise and Sviatopolk I of Kyiv.

However, in the late 12-14th centuries, when Kyiv Rus entered the period of feudal fragmentation, minting coins was stopped. Silver ingots, which were called "Hryvnias", instead were used as money. In the 15th century, ruble minted in Novgorod ousted the Hryvnia from circulation - it remained simply a weight unit equal to approximately 200 grams.

In the 17th century, Bohdan Khmelnytskyi planned to bring coins as money unit in Ukraine. During the 1648-1654 Khmelnytsky Uprising, he wanted to introduce an independent fiscal policy, considering it one of the main features of the state. However, there are no archeological artifacts to back up whether his intentions turned into life.

In 1917, the October Revolution changed the disposition of power in the former Russian Empire. The Bolshevik coup-d'état left its trace in Ukraine as well - after the military struggle for power in Kyiv, Tsentralna Rada adopted the III Universal of the Ukrainian People's Republic on November 20. The document stated the independence of the Ukrainian Republic with the capital in Kyiv as an autonomous part of the Russian state. The same document initiated creation of the new currency, which would help to strengthen the position of the new state and revive the market, shook after the October 1917 uprising in Petrograd.

In December 1917 (January 1918 according to Gregorian Calendar), Tsentralna Rada adopted a law to transform the Kyiv office of the State Bank of Russia into the Ukrainian state bank. Its first director, Mykhailo Kryvetskyi, signed the first banknote of the independent Ukrainian state - 100 karbovanets.

Karbovanets stayed the principal currency of Ukraine throughout the 20th century. Its name most likely derives from "karbuvaty", which means "to mint" in Ukrainian. Each Karbovanets contains 17.424 parts of pure gold. Karbovanets issued during the Ukrainian People's Republic era are often considered the most detailed and artistic currency ever adopted in Ukraine. 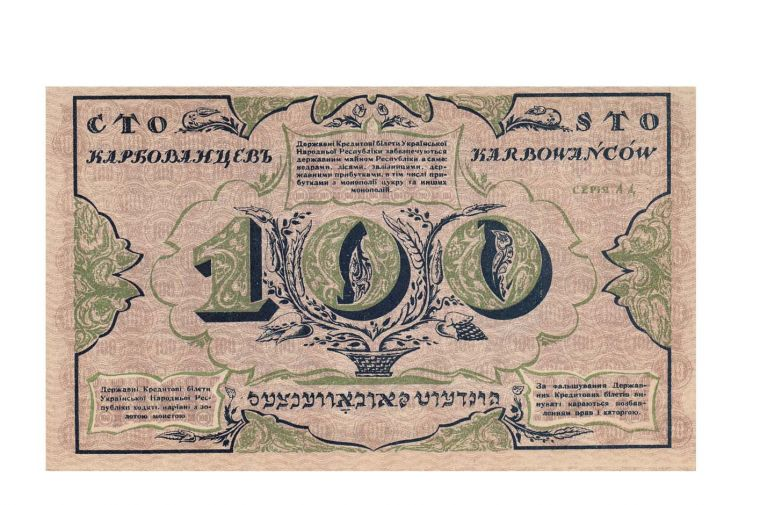 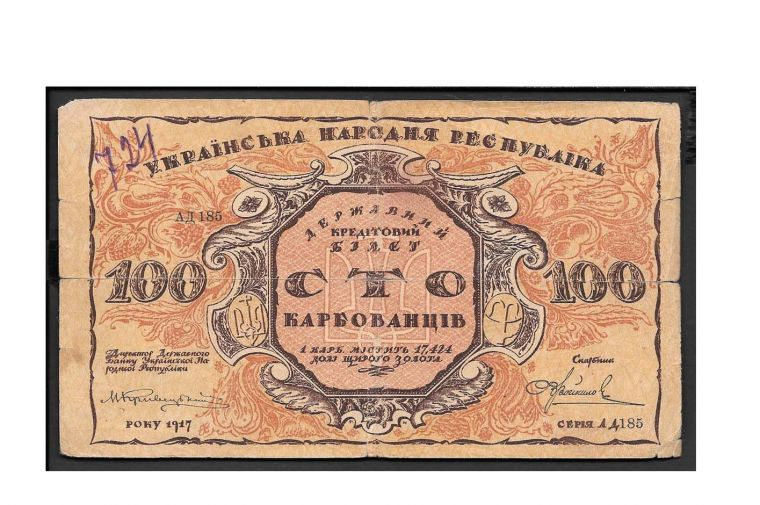 The new banknote was designed by Heorhiy Narbut, who also famously designed the Coat of arms of Ukraine. 100 Karbovanets banknote was decorated with elements and motifs of the 17-18th century Ukrainian Baroque. Exquisite fonts were used for inscriptions, including the "100 Karbovanets" that was written in four languages of the most numerous nations living on the territory of Ukraine - Ukrainian, Russian, Polish and Yiddish.

Thanks to Narbut, Ukrainian Hryvnia also depicted a trident - the forgotten symbol of the oldest national currency, golden and silver coins minted by Volodymyr the Great. The 100 Karbovanets banknote was printed on regular paper without any watermarks, which caused the high circulation of counterfeit banknotes. In March 1918, Tsentralna Rada adopted the law about the new currency - Hryvnia, which equaled to ½ Karbovanets or 100 Shahs.

Pavlo Skoropadskyi and the post-WWI era 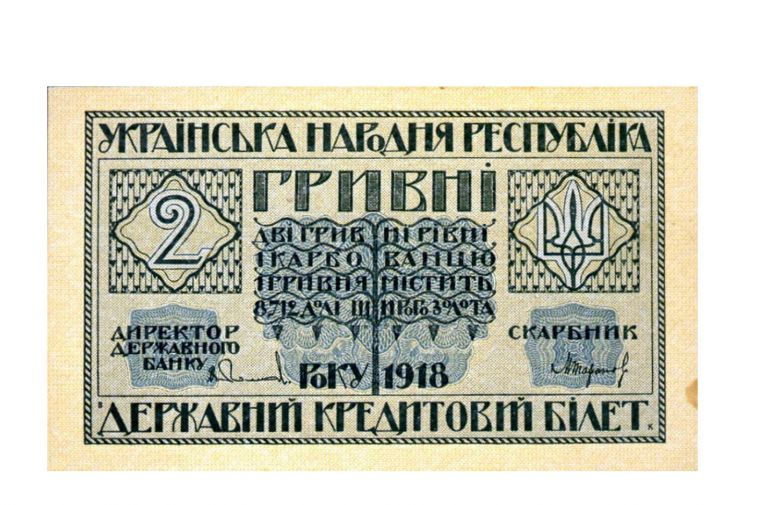 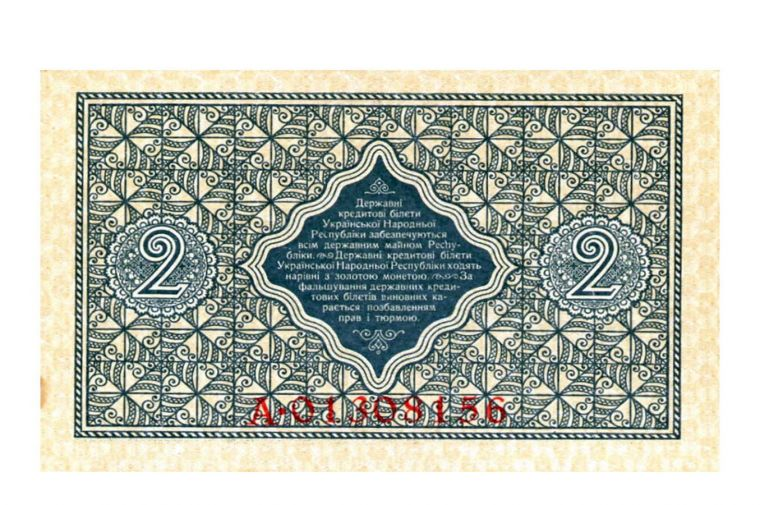 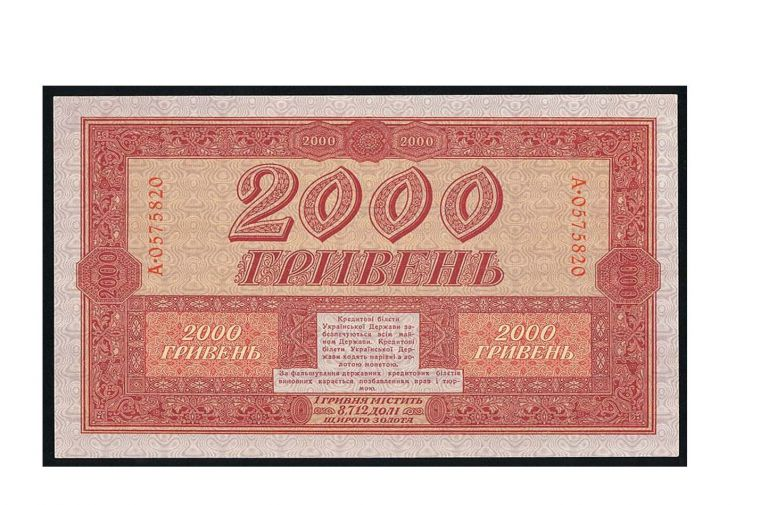 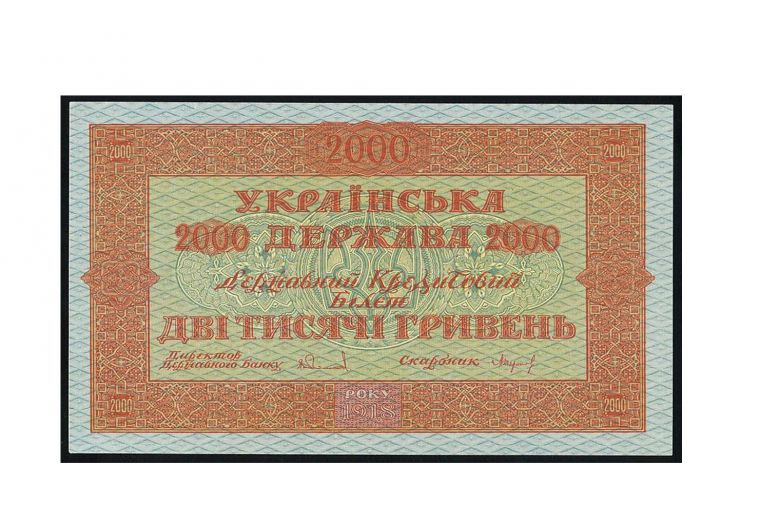 1918 became the rocky year for Ukrainian currency. In April 1918, the authority in Ukraine was gained by Pavlo Skoropadskyi, the last Ukrainian Hetman. He preserved the denomination value of the previous government: 1 Hryvnia equaled to 1/2 Karbovanets or 100 Shahs. At the time, the market was full of every imaginable currency: Tsar Karbovanets, Ukraine People's Republic Karbovanets and Hryvnias, locally-minted Odesa Karbovanets, Deutsche Mark and Russian Empire's silver coins.

The new government headed by Skoropadskyi allied with Austrian-German occupation forces that served as a guarantee of the integrity of the Ukrainian state. The new money was also necessary to continue reformation of the state. That's why Tsentralna Rada headed by Skoropadskyi ordered new banknotes from Berlin. During 1918, the banknotes of 2, 10, 100, 500, 1000 and 2000 Hryvnias were printed in Germany. 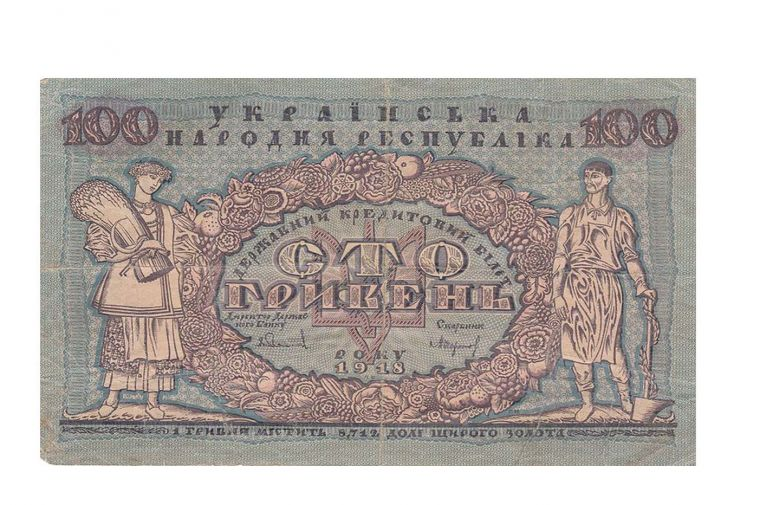 Heorhiy Narbut, who previously designed all money in Ukraine, this time decorated only the 100 banknote - it depicted a worker with a hammer and a peasant with a sickle, the recognizable Soviet symbols, on the background of wreath of flowers and fruits.

Regardless of Skoropadskyi's efforts, his government couldn't eliminate what was left from the previous authorities - a huge national debt. Besides, Rada had to sustain the current public administration, so printing more money was inevitable. In the end, it led to inflation and a spike of speculation on currencies in all regions of Ukraine.

In December 1918, the authorities changed once again - Skoropadskyi's regime was overthrown by the Directorate of Ukraine headed by Volodymyr Vynnychenko and Symon Petliura. The new authorities decided to bring back Hryvnia as the main Ukrainian currency. In particular, Directory planned to increase the golden content in minted coins: locals were to provide all available gold and silver for the minting of coins. All copper monuments of Russian Tsars were planned to be melted and instead made into small coins. The golden Hryvnia was planned to depict Taras Shevchenko, and the silver coins - the house of the Central Council.

However, the plans weren't meant to be fulfilled - the Bolshevik invasion of 1920 lead to banning the circulation of all Ukrainian money. In total, during the 1917-1921 era, 24 types of paper money notes were introduced and used on the territory of Ukraine.

The Soviet Era and WWII 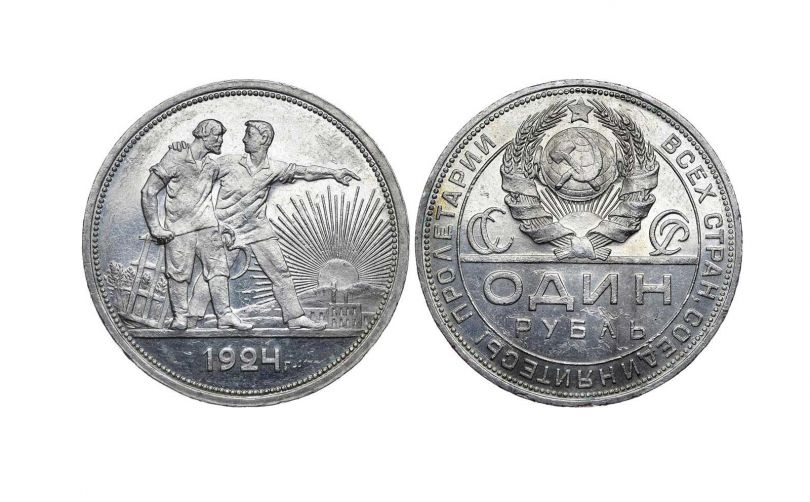 During the early years of occupation, the Nazi authorities allowed using the national currency, Karbovanets, along with Reichsmark. The official currency rate stated that 10 Karbovanets equaled 1 Reichsmark. In 1942, the Nazi occupants established the Central Emission Bank in Rivne, the capital of Reichskommissariat Ukraine. Later that year, the bank issued a new currency - Reich Karbovanets. The new currency was issued in 1, 2, 5, 10, 20, 5, 100, 200 and 500 banknotes, each bearing a watermark. 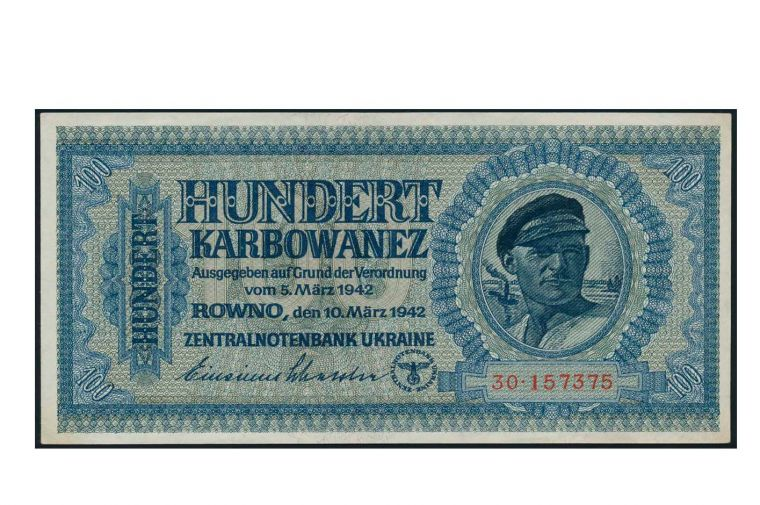 The banknotes were printed in Berlin on high-quality paper. The averse of the banknote depicted "happy Ukrainian people", inscriptions in German and an eagle with swastika. The reverse had an inscription in German and Ukrainian: «Falsification of banknotes is punishable by prison». In 1944, after the invasion of the Red Army, occupied territories experienced a prompt currency devaluation. The Reich Karbovanets was immediately abandoned and not accepted on the liberated territories, both for trade and for exchange operations.

In November 1990, when the Soviet Union was in the midst of its dissolution, single-usage Karbovanets were introduced as the auxiliary currency in Ukraine. Many Ukrainians still remember stamping or clipping pre-1991 single-usage coupons at the register to pay for things like shoes and clothes: 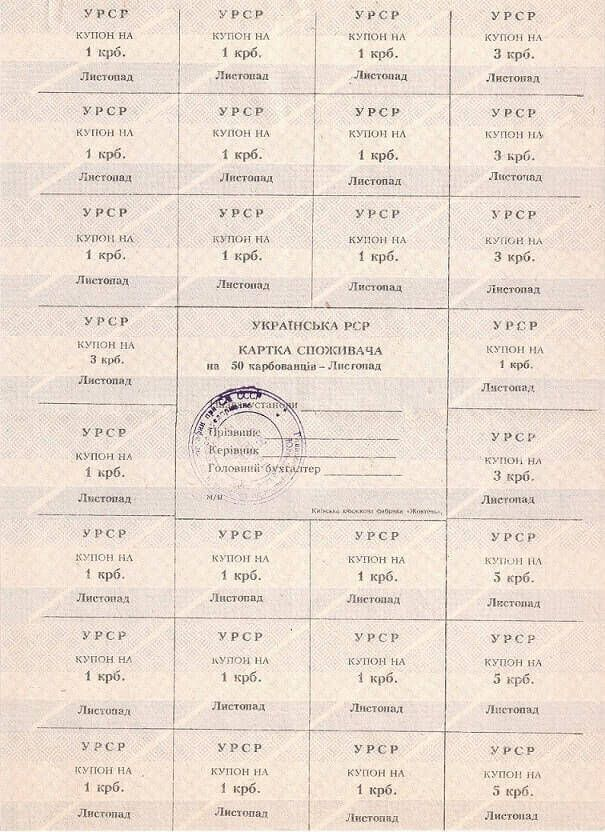 Independent Ukraine and the modern era 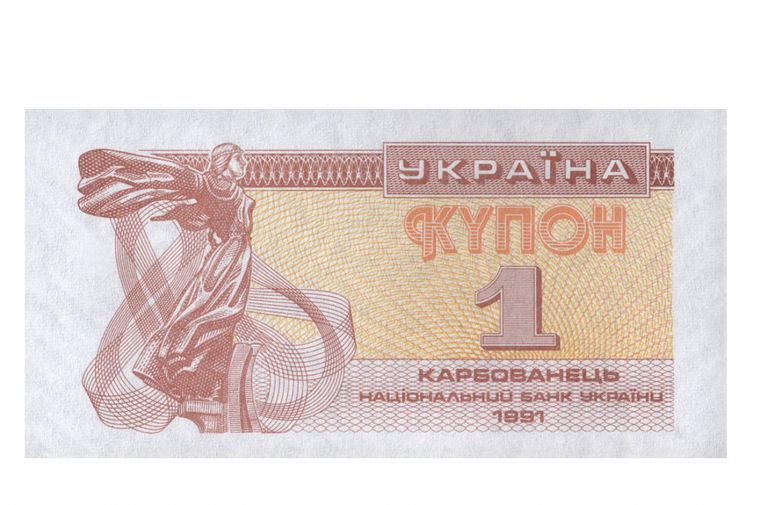 In 1991, Ukraine declared itself an independent state. The issue of the new currency arose immediately and the National Bank of Ukraine issued coupons (also called "coupon-karbovanets") of multiple usage that circulated from September 1991 until 1996. The implementation of coupons meant that Ukrainians used two currencies - the Soviet Ruble and Ukrainian coupon-karbovanets. To pay for food and products of light industry like clothes and shoes, people used coupon-karbovanets. Rubles and Karbovanets were accepted as payment for services. 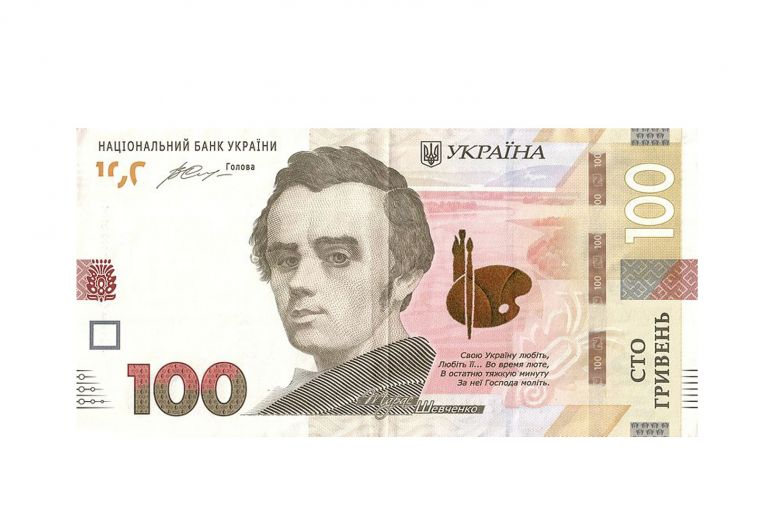 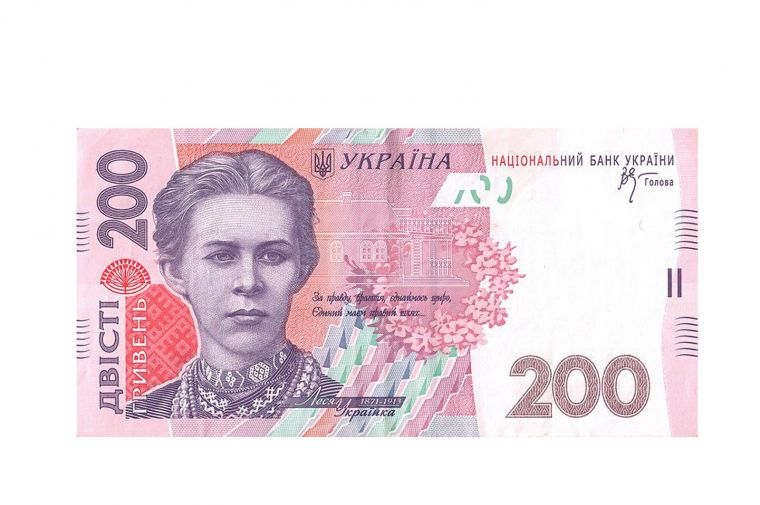 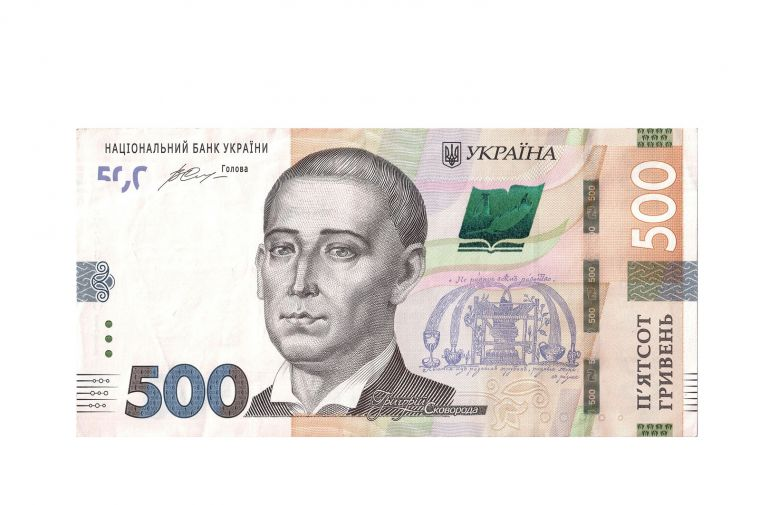 Despite the changes in the design, the banknotes preserved their recognizable look and personalities depicted on different nominals. For instance, 1 Hryvnia depicts Volodymyr the Great, 100 banknote is recognizable by the picture of writer Taras Shevchenko, 200 Hryvnias depict writer Lesia Ukrainka. The banknote of the highest nominal, 500 Hryvnias, depicts the philosopher Hryhorii Skovoroda on the averse and Kyiv-Mohyla Academy on the reverse.

Nowadays, the design of Ukrainian national currency has watermarks for protection as well as numerous intricate elements that are interesting to explore.

No coins were issued for the first hryvnia.

Coins were first struck in 1992 for the new currency but were not introduced until September 1996. Initially coins valued between 1 and 50 kopiyky were issued. In March 1997, 1 hryvnia coins were added. Since 2004 several commemorative 1 hryvnia coins have been struck.

Also, on 26 October 2012, the National Bank of Ukraine announced it was considering the introduction of a 2-hryvnia coin.

The hryvnia was introduced according to a Presidential Decree

Anniversary of the hryvnia: what happened to the Ukrainian currency over the period of 25 years