Paul Kevin Jonas II (born November 5, 1987) is an American singer-songwriter, actor, dancer, and entrepreneur. He rose to fame as a member of the pop rock band, the Jonas Brothers, alongside his younger brothers Joe and Nick. Jonas became a prominent figure on the Disney Channel alongside his brothers in the late 2000s, gaining a large following through the network: he appeared in the widely successful musical television film, Camp Rock (2008) and its sequel, Camp Rock 2: The Final Jam (2010) as well as two other series, Jonas Brothers: Living the Dream (2008–2010) and Jonas (2009–2010).

After the group confirmed a hiatus in 2012, Kevin appeared on his own E! reality series that same year, Married to Jonas, with his wife, Danielle. Following the band's initial break-up in 2013, Jonas appeared on the seventh season of The Celebrity Apprentice in 2014, founded the construction company Jonas Werner, and became the co-CEO of The Blu Market, an influencer marketing company. In 2019, he rejoined the Jonas Brothers following their reunion. The group would go on to release their fifth studio album. The reunited Jonas Brothers appeared in two Amazon Prime Video documentaries named Jonas Brothers: Chasing Happiness and Jonas Brothers: Happiness Continues in 2019 and 2020.

Jonas appeared on People magazine's list of the Sexiest Men Alive in 2008 at the age of 21, and thus included as part of the 21 Club

Paul Kevin Jonas II was born on November 5, 1987, in Teaneck, New Jersey, and grew up in Wyckoff. His mother, Denise Marie (née Miller), is a former sign language teacher and singer, and his father, Paul Kevin Jonas Sr., is a songwriter, musician, and former ordained minister at an Assemblies of God church. He has three younger brothers, Joe (born 1989), Nick (born 1992), and Frankie (born 2000) 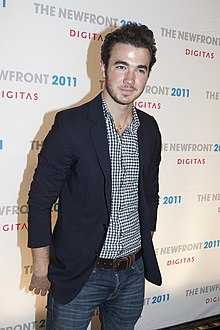 Danielle is a former hairdresser with Ryan Rodgers Redken Ambassador, and the pair married at Oheka Castle on December 19, 2009, with his brothers Joe and Nick as his best men. The couple met while vacationing with their families in the Bahamas in May 2007. Their first daughter, Alena Rose, was born on February 2, 2014,[43] and their second daughter, Valentina Angelina, was born on October 27, 2016.

In April 2021, Jonas showed support for the NGO GiveIndia during the worsening situation of the COVID-19 pandemic in India and urged fans to help donate to the organization to help.[citation needed]

In September 2021, Jonas and his wife Danielle announced the release of a book for children titled There's a Rock Concert in My Bedroom, which chronicles the story of Emma, a girl who is excited about participating in her school's talent show. The Jonases said the initiative was motivated by their daughters

Kevin Jonas was born in Teaneck.

Kevin and Danielle Jonas Write Kids' Book Inspired By Their 'Rock Star' Daughters: They 'Uplift Us'

The Jonas Brothers release 'What a Man Gotta Do,' their first single of 2020

Title
Author
Date
Publisher
Description
Priyanka Chopra is seen dancing with father-in-law Kevin in video, says 'thank you for being the life of the party'. Watch
February 14, 2020
Hindustan Times
Priyanka Chopra, her husband Nick Jonas, his brothers Kevin and Joe wished Nick's father Kevin Jonas on his birthday.
Priyanka Chopra gets dessert stuffed with Rs 500 notes, Rajkummar Rao captures the moment
November 6, 2019
Hindustan Times
Actor Priyanka Chopra and Rajkummar Rao enjoyed a sweet dessert while in Delhi for the shoot of their upcoming film, The White Tiger.
11 things you probably didn't know about the Jonas Brothers
Olivia Singh
September 16, 2019
Business Insider
Siblings Nick Jonas, Joe Jonas, and Kevin Jonas have been in the spotlight for years, but there are some things fans might not know about them.
zevinjonasonline.com/wp/
twitter.com/kevinjonas
facebook.com/kevinjonas/
en.wikipedia.org/wiki/Kevin_Jonas
Is a