George Dyson was born on March 26, 1953. He is the son of the theoretical physicist Freeman Dyson and mathematician Verena Huber-Dyson. He is also the grandson of his namesake, the composer Sir George Dyson. He currently lives and works in Bellingham, WA. Dyson dropped out of high school at the age of seventeen and did not receive a degree until December 4th, 2012 when he received an honorary degree from University of Victoria.

Dyson writes on the history of technology, with topics that include the history of computing, the development of algorithms and intelligence, communication systems, space exploration, and the design of water craft. He also lectures at academic institutions, corporations, and conferences. He is a lecturer and research associate at Western Washington University's Fairhaven College. In 2002-2003, Dyson was the Director's Visitor at the Institute for Advanced Study in Princeton, New Jersey.

He has written several books including Baidarka (1986), Darwin Among the Machines: The Evolution of Global Intelligence(1997), Project Orion: The Atomic Spaceship 1957-1965 (2002), and Turings Cathederal (2012), and most recently, Analogia: The Emergence of Technology Beyond Programmable Control (2020). 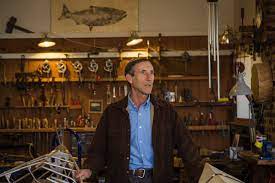 George Dyson spent spent twenty years in British Columbia where he designed kayaks and researched historic voyages and native peoples. He was granted Canadian citizenship while living in BC and currently holds dual citizenship. George Dyson is the founder of Dyson, Baidarka & Company, where he designs Aleut-style skin kayaks.

Analogia: A Conversation with George Dyson

George Dyson • Out of the Woods