Game theory is a branch of mathematics focused on strategic decision making.

Game theory is a branch of mathematics focused on strategic decision making. It is used to model the strategic interaction between independent and competing players in a context where rules and outcomes are predefined. Game theory has numerous applications in all social sciences, and has also been applied to logic, system sciences, computer science and especially economics.

Game theory can be applied any time there is a situation with two or more players that involves known payouts or measurable consequences. The key concept of game theory is that one player's gain is contingent upon any strategy executed by the other player. Assuming all players are rational beings who are utility maximizing, game theory can be used to calculate the most likely outcomes of these situations.

Below are some common terms that are often used to describe scenarios in which game theory can be applied:

Game theory can be further divided into five main types of games:

The Nash Equilibrium is a concept within game theory where the most favorable outcome of a game can be achieved if the players stick to their initial plans and don't deviate from their initial strategy. In other words, there is no incentive for a player to change their chosen strategy after considering their opponent's choice.

The Nash Equilibrium is one of the most well-known concepts within game theory. It is commonly illustrated with a situation known as the Prisoner's Dilemma. In the Prisoner's Dilemma, two prisoners (the players) are arrested for a crime and brought into separate rooms to be interrogated. The prisoners have no way of communicating with each other or knowing what the other player will choose. Officials present four deals, which are often displayed in a punnet square. 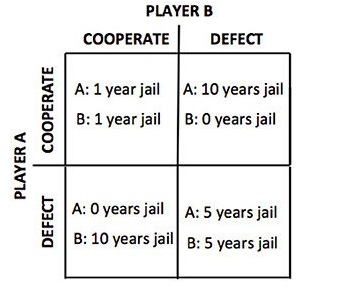 The prisoner's dilemma illustrated with a punnet square. Source: towardsdatascience.com

In this scenario, the most beneficial choice for each prisoner is to stick to their original plan of not confessing to the crime, as it is the most fruitful choice for both of them collectively. The Nash Equilibrium suggests that the most likely outcome would be that both men confess to the crime, each opting for the best choice for them individually, but worse for them as a whole.

Game theory has its origins in the work of mathematician John von Neumann and economist Oskar Morgenstern in the 1940s. Von Neumann and Morgenstern initially developed game theory to solve problems in economics. In their book The Theory of Games and Economic Behavior, Von Neumann and Morgenstern asserted that mathematics for physical sciences could not be reasonably applied to economics. They described economics as being much like a game, with strategic players who anticipate and react to each others moves, and laid out the basic framework for the field of game theory.

Principles and concepts of game theory have been applied to the field of artificial intelligence (AI), particularly with multi-agent AI systems, Imitation and Reinforcement Learning, and Adversary training in Generative Adversarial Networks (GANs). Game theory can also be used to describe many situations found in daily life and machine learning (ML) models. For example, in an Adversary training in GANs, the two models used, a generative model and a discriminative model, can be viewed as two players in a game. The two models are challenging each other, with the generative model creating fake samples to confuse the other, and the discriminative model learning to be better at identifying the right sample. Much like a game, this process will repeat until Nash Equilibrium is reached and the two models become proficient at performing their tasks and are unable to improve.

Game theory in AI has been explored in programs at Stanford and within the US government, although officials say that incorporating AI into US government programs is a "work in progress." The Information Innovation Office at the Defense Advanced Research Projects Agency director William Scherlis has said in order to do strategy planning within AI, combining game theory elements with machine learning would be important.