Forza Horizon 5 is a 2021 racing video game developed by Playground Games and published by Xbox Game Studios. It is the fifth Forza Horizon title and twelfth main instalment in the Forza series. The game is set in a fictionalised representation of Mexico. It was released on 9 November 2021 for Microsoft Windows, Xbox One, and Xbox Series X/S.

The game received critical acclaim and became a commercial success upon release; it launched to over ten million players in the first week, the biggest-ever launch for an Xbox Game Studios game. The game was nominated for three jury-voted awards at The Game Awards 2021, winning all three of its nominations and tying with Hazelight's It Takes Two for most wins, and was also nominated for the public-voted Players' Voice award, which went to fellow Xbox Game Studios title Halo Infinite.[4] 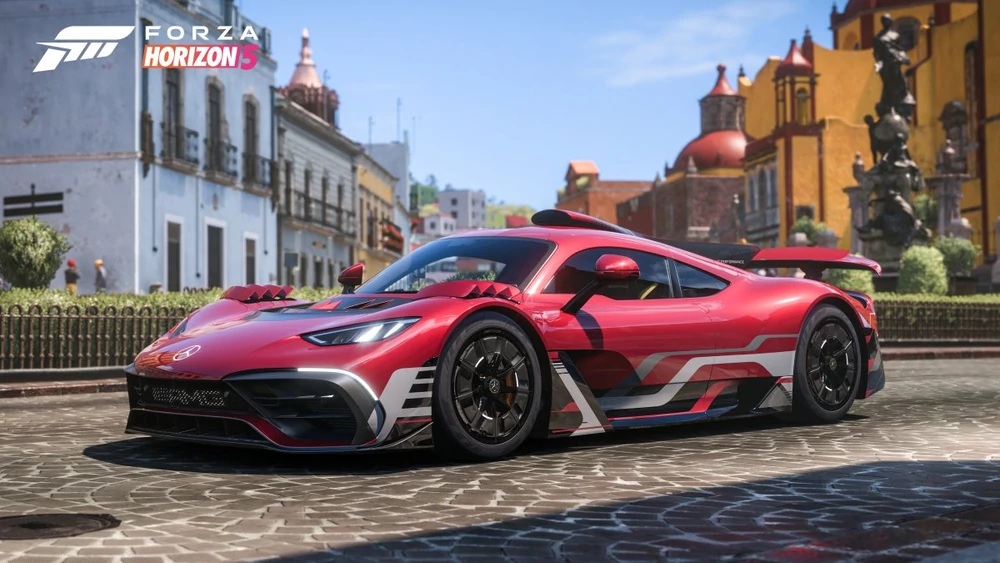 Forza Horizon 5 is a racing video game set in an open world environment based in a fictional representation of Mexico.[5] The game has the largest map in the entire Forza Horizon series, being 50% larger than its predecessor, Forza Horizon 4, while also having the highest point in the Horizon series.[6][7] The map was described by creative director Mike Brown as one of the most diverse Forza Horizon maps the team has built.[8] The map contains an active caldera volcano, jungles and beaches, ancient Mayan temples, and towns and cities such as Guanajuato. Players can explore the open world freely, though they can also compete in multiplayer races and complete the campaign mode. Both the cars featured in the game and the player character can be extensively customised.[9] Players are able to create custom liveries and tunes for cars, and perform engine swaps, drivetrain swaps, or install body kits on certain vehicles. The game is the first in the franchise to support ray tracing on cars (although this is only available in Forzavista).[10]

The game introduces a new weather system (local weather) in which players can visit one side of the map and can visibly see a storm. Because Mexico is such a vast nation with such a wide range of elevations, multiple climates would appear in the game at around the same time. The four seasons still exist but would affect the eleven unique biomes around the map. For example, in the dry season, dust storms will appear, while tropical storms occur throughout the fall storm season.[11] Another detail is in the jungle, in which the environment would now react to the weather; an example of this is leaves flying everywhere.[12][13]

Forza Horizon 5 also introduces a brand new Horizon Arcade. This consists of a series of mini-multiplayer games strewn across the map. One of these mini-multiplayer games is called "Piñata pop" where the Horizon Festival's cargo plane drops piñatas. The goal is to pop as many piñatas as they can with the help of other players. It also introduces the "EventLab", a toolset in which players can create custom games, races, and more depending on their personal preference.[14] A new feature called "Forza Link" was introduced. According to Brown, it is an AI assistant that tracks the current statuses of players, helping them to link with other players online and play together. Forza Link can also link players' GPS systems if they accept the invitation from another player.[9] Accolades, new to the Forza Horizon series, allow players to collect points and prizes for completing certain tasks. Some vehicles can only be unlocked through the completion of the Accolades. There are over 1,800 accolades for the player to achieve.[15]

The Eliminator battle royale game mode introduced in Forza Horizon 4 returns, albeit with players starting in a 1963 Volkswagen Beetle rather than a 1965 Mini.[16] The world is designed for the mode unlike the previous game, which received The Eliminator after launch.[17] As in the previous game, players can buy in-game houses ranging from small beachside cabanas to even a hotel, which can unlock rewards such as Wheelspins and the right to Fast Travel. The game features over 600 licensed vehicles.