Andre Romelle Young popularly known as Dr Dre is truly a Godfather of the American hip hop industry. A rapper and producer by profession, Dre’s life story is filled with numerous milestones that have been instrumental in shaping the music industry’s current outlook. Christened Andre Romelle Young, Dre started his career as a member of an electro group, namely, World Class Wreckin Cru. Thereafter, he made his mark with the influential gangsta rap group, N.W.A., which gave him his first major success. He co-founded Death Row Records and later Aftermath Entertainment of which he is the current CEO. Dre’s natural musical talent helped him become a leading pioneer of rap music, his two solo albums, ‘The Chronic’ and ‘2001’ were super successful. He introduced to the world G-funk style of music that became an instant rage. Interestingly, Dre’s career isn’t limited to personal milestones only. In fact, he has been the driving force behind the success story of numerous rappers and hip hop artists whom he introduced to the music fraternity. These include: Snoop Dogg, Eminem and 50 Cent. Undoubtedly, he can be credited as the most influential producer of the hip-hop history. 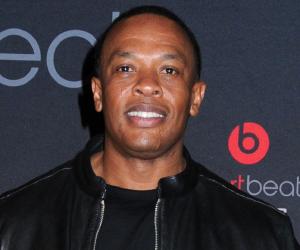 His initial stint with music was as a DJ in the local club, The Eve After Dark. It was during this time that he took up the moniker Dr Dre that has lived with him all through.

In 1984, Dre began his musical career as a member of the musical group, World Class Weckin’ Cru. The group soon dominated the electro-hop scene in the West Coast with their first single, ‘Surgery’ selling more than 50,000 copies within Compton alone.

In 1986, he along with Eazy-E, Ice Cube and DJ Yella formed the local gangsta rap group N.W.A. (Niggaz for Life). N.W.A worked on the themes of urban crime and gang lifestyle. Their lyrics were harsh and overt, and brought to mainstream America the slice of ‘real’ life on streets.

in 1991, he co-founded Death Row Records with Sue Knight. In 1992, he released his first single, which served as the title track for the film ‘Deep Cover’. The single featured the debut of rapper Snoop Dogg as well

In 1993, Dre made the big leap of his career with his maiden album, ‘The Chronic’. Its singles, ‘Nuthin’ but a ‘G’ Thang’, ‘Let Me Ride’, ‘Fuck with Dre Day’ created a revolution in the music industry, making the album a cultural phenomenon. The album with its G-funk sound dominated the hip hop music for the early 1990s.

In 1996, following contractual dispute, he left Death Row Records for good. Same year, he set up his own label, Aftermath Entertainment in connection with Interscope Records.

In November 1996, his album ‘Dr Dre Presents the Aftermath’ was released. It featured songs by Aftermath artists and a solo by Dre, ‘Been There, Done That’. The single was a rejection of the highly publicized West Coast–East Coast hip-hop feud and served as the farewell to gangsta rap.

In 1999, Dre produced three songs on Eminem’s debut album, ‘The Slim Shady LP’. The album went on to sell four million copies in US alone and revived the fate of Aftermath Entertainment as well.

Following the success of ‘2001’, he started producing songs and albums by other artists, including Eminem, The D.O.C and so on. In 2001, he hired R&B singer, Truth Hurts to Aftermath.

In 2003, he produced the debut smash hit by 50 Cent, ‘Get Rich or Die Tryin’. Along with Eminem’s boutique label Shady and Interscope, he co-produced four tracks from the album, including the hit single, ‘In Da Club’. He followed this up by producing several tracks for rap albums by various singers including Young Buck, 50 Cent, Snoop Dogg and Jay Z.

Music apart, Dre has been featured in a number of movies, his debut appearance being for ‘Set It Off’ in 1996. He followed this up with ‘The Wash’ and ‘Training Day’. He also made guest appearances in music videos.

Dre’s multi-dimensional career saw yet another peak in 2008 when he launched his own brand of headphones, ‘Beats by Dr Dre’. The line-up consisted of various categories of in-ear headphones, supra-aural headphones and circumaural headphones. In 2014, the headphone brand was finally taken over by telecom giant Apple Inc for a reported $3 billion.

His philanthropic woks include a joint donation of $70 million along with Jimmy lovine to University of Southern California for the establishment of the Jimmy lovine and Andre Young Academy for Arts, Technology and the Business of Innovation. The goal of the academy is to nurture upcoming talents.

Who is Dr. Dre? Everything You Need to Know