The Doomsday Clock is a symbol that represents the likelihood of a man-made global catastrophe. Maintained since 1947 by the members of the Bulletin of the Atomic Scientists, the clock is a metaphor for threats to humanity from unchecked scientific and technical advances. The clock represents the hypothetical global catastrophe as midnight and the Bulletin's opinion on how close the world is to a global catastrophe as the number of minutes or seconds to midnight, assessed in January of each year. The main factors influencing the clock are nuclear risk and climate change. The Bulletin's Science and Security Board monitors new developments in the life sciences and technology that could inflict irrevocable harm to humanity.

The clock's original setting in 1947 was seven minutes to midnight. It has been set backward and forward 24 times since, the farthest from midnight being 17 minutes in 1991, and the nearest being 100 seconds, from 2020 to the present.

The clock was moved to two and a half minutes in 2017, then forward to two minutes to midnight in January 2018, and left unchanged in 2019. In January 2020, it was moved forward to 100 seconds before midnight.The clock's setting was left unchanged in both 2021 and 2022. Since 2010, the clock has been moved forward over four minutes, and has changed by five minutes and twenty seconds since 1947.

Since 1947, the clock has been moved backward eight times and forward 16 times.

The Doomsday Clock's origin can be traced to the international group of researchers called the Chicago Atomic Scientists, who had participated in the Manhattan Project. After the atomic bombings of Hiroshima and Nagasaki, they began publishing a mimeographed newsletter and then the magazine, Bulletin of the Atomic Scientists, which, since its inception, has depicted the Clock on every cover. The Clock was first represented in 1947, when the Bulletin co-founder Hyman Goldsmith asked artist Martyl Langsdorf (wife of Manhattan Project research associate and Szilárd petition signatory Alexander Langsdorf, Jr.) to design a cover for the magazine's June 1947 issue. As Eugene Rabinowitch, another co-founder of the Bulletin, explained later,

The Bulletin's Clock is not a gauge to register the ups and downs of the international power struggle; it is intended to reflect basic changes in the level of continuous danger in which mankind lives in the nuclear age...

Langsdorf chose a clock to reflect the urgency of the problem: like a countdown, the Clock suggests that destruction will naturally occur unless someone takes action to stop it. 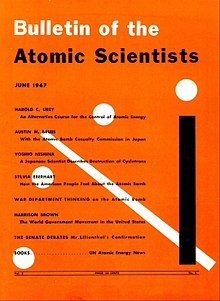 Cover of the 1947 Bulletin of the Atomic Scientists issue, featuring the Doomsday Clock at "seven minutes to midnight"

The 5th Doomsday Clock Symposium was held on November 14, 2013, in Washington, D.C.; it was a day-long event that was open to the public and featured panelists discussing various issues on the topic "Communicating Catastrophe". There was also an evening event at the Hirshhorn Museum and Sculpture Garden in conjunction with the Hirshhorn's current exhibit, "Damage Control: Art and Destruction Since 1950". he panel discussions, held at the American Association for the Advancement of Science, were streamed live from the Bulletin's website and can still be viewed there. Reflecting international events dangerous to humankind, the Clock has been adjusted 24 times since its inception in 1947, when it was set to "seven minutes to midnight".